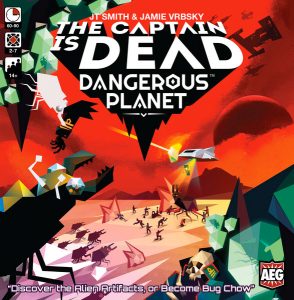 Many game publishers like to step into the film creation world when creating their games. Otherworldly exploration has been a common find in sci-fi movies, and game publishers have caught on to this as well.

A group of space explorers is tasked to find alien relics after taking a shuttlecraft to the surface. However, the alien planet contains dangerous swarms of bugs. Will our crew survive the onslaught and collect enough relics for Mission Control? You’ll find out in the third installment of The Captain is Dead: Dangerous Planet, a cooperative action management game for 1-7 players. It plays best with 4 – 5 players.

In the first edition of The Captain is Dead, players moved around a ship collecting skills and tools to complete their overall goal: repairing the Jump Drive. In the newest installment, players are moving through alien tunnels to find artifacts. The more artifacts they collect, the faster the swarm moves.

At the beginning of the game, each player will choose a role card. Each role has a specific hand size and amount of actions, discounts to certain tasks, and a special passive or activated ability. Players will also need to choose a difficulty level.

On each player’s turn, they choose an action or a system to activate. Systems are actions that can only be activated in the shuttle (with some exceptions). They help the players gain skill cards, teleport, and heal from injuries. Players can also move into or along the tunnels. When tunnels are explored, players resolve what is written on the tunnel token. Tunnel effects either place artifacts in the tunnel’s location, place bugs, or give the active player a bonus.

If the players manage to hold off the bugs and acquire a specific number of artifacts, depending on their difficulty level, they win. However, if the bugs destroy enough artifacts or the shuttle, the players lose. The players also lose if they cannot place any more bugs.

The Captain is Dead: Dangerous Planet is a very good game for those who love strategy. The game provides multiple opportunities for the players to use long-term planning to accomplish their goal. The devices in the game especially allow for interesting decisions to protect against the hordes of bugs in the game.

One caution for prospective buyers is that the game is narrowly focused when only 2 players are at the table. The creation of the tunnel system is what defines the difficulty in the game. With only two heroes and using a standard setup for the tunnels leads to a more aggressive bug movement. The game results in having only one strategy, and overall players will be unable to find any new creative solutions.

Additionally, the game structure has problems with the replay value. The Alert cards have duplicates so finding all the yellow alerts isn’t difficult. To gain enough artifacts, you need to flip about 85% of the tiles, leading to seeing the same tiles with each game. Overall, there just isn’t much difference between games besides which roles are chosen.

Finally, the components did not match the quality seen in the original The Captain is Dead. The board is made up of 27 small tiles. But, because the tiles are being flipped, half of the tunnels end up falling apart or going askew. Also, players might not have much room on the tiles. Each tile is made up of two different small spaces. This makes a tile very crowded when you have players, devices, bugs, and artifacts on a space.

The Captain is Dead: Dangerous Planet is a good game that rewards strategic thinking. This game is great with a solid team, but it won’t be an experience that the team loves over and over. Component annoyances and difficulty decrease the fun factor in the game, and game nights with this as a rare choice are more likely. If you have a group of players who enjoy strategic thinking and cooperative play, try out some bug blasting with The Captain is Dead: Dangerous Planet.

Final Score: 3 Stars – Players looking for a decent top-up dose of The Captain Is Dead or just looking for some cooperative play with challenging choices should land here.

About Samir:
hello there
I am Tas’s apprentice
I live in a dungeon