We review Avengers Infinity War: Thanos Rising, the cooperative dice rolling game from WizKids Games. In Thanos Rising, players must work together to defeat the villains before Thanos collects all the infinity stones. 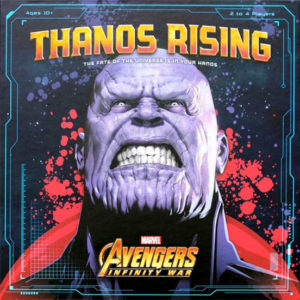 Maybe you have heard of the Marvel Cinematic Universe (MCU)? Well if you are a fan of Marvel superhero movies, today’s review will likely be of interest to you. We are taking a look at Thanos Rising: Avengers Infinity War, a cooperative dice rolling game set in the MCU.

Thanos Rising is a dice rolling and set collection game for 2-4 players. It plays in about 45-60 minutes. At least if Thanos doesn’t crush you!

Each player in Thanos Rising will control their own team of Marvel superheroes and starts with one character: Captain America, Gamora, Dr. Strange, or Black Panther. At the beginning of the game, you will roll four dice each turn, but as you recruit additional heroes you will gain additional dice and abilities.

The main board is divided into three sections and to start your turn, you must announce which section you travel to in an attempt to recruit heroes or damage enemies. First, however, Thanos will wreak havoc throughout the universe. Two Thanos dice are rolled which will dictate how Thanos activated each turn. One of the dice will move Thanos closer to collecting the infinity stones, while the other will cause Thanos to change his focus. Thanos will deal damage to heroes in the section he is focused on, including the active player if they chose to go to there.

Once you’ve gotten past the wrath of Thanos, you can roll your dice to either damage an enemy or recruit a hero—each has a certain combination of dice results that are needed. After every roll, you must assign at least one die to a card. You can earn multiple cards in a turn, but you have to assign to a single card on each individual roll. If you successfully acquire a hero, they heal all their damage and join your team, granting you a special ability. If you damage an enemy you add a damage counter to it and gain a bonus tile that can grant a one-time bonus to any player at a later time.

Play continues until you’ve defeated 7 villians (or more, if you want to increase difficulty). If Thanos acquires all of the infinity stones or defeats 10 heroes or all of the heroes for one of the players, you lose.

The first thing you will notice about Thanos Rising is the giant Thanos statue that sits in the middle of the table. It’s component overkill in the best way. From a game experience standpoint, the intellectual property is really the selling points and having a giant Thanos staring you down is a great way to bring it to life.

The game itself is a simple, but fun, cooperative experience. Early on you will struggle to recruit even the measliest of heroes. However as you start gaining a few more people to join your team you will be able to roll additional dice, mitigate bad dice rolls, heal damaged heroes, and more. You reach a point where you get a bit of an engine going and it feels great having that all come together when you are trying to get the final damage on Thanos’s minions.

There are four different colored dice, each with a different distribution of faces. Each type has some faces which produce two of its most common result—red dice have a 2 strength face, green dice have a 2 mystic, etc. This gives you some choices to make when committing dice to a certain card. In practice is often becomes correct to just assign the two-power results whenever possible. At the very least though it gives you some hope you can acquire multiple cards in most turns, even if the chances of doing so are highly improbable.

The biggest flaw in Thanos Rising is the huge swings of luck that can really make or break your experience. The problem isn’t the dice rolling—at least you know to expect that going into it. But the villains and heroes are mixed into the deck randomly during setup. After Thanos activates, if he is facing a section with a villain, it will also activate and deal more damage to your heroes. Early on if there are multiple villains out it can be near impossible to win. Alternatively, if you have none or few villains and are able to bolster your team early it can be a breeze. At least if the deck is stacked against you it is likely you’ll die quickly and be able to play again.

Thanos Rising takes the Marvel universe and successfully implements it in a fun to play board game. This is exactly the type of game that can take advantage of a popular intellectual property and possibly help get folks who aren’t necessarily modern board game players to get involved in the hobby. The rules are simple and thematic.

Fans of the Marvel cinematic universe are going to have a great time playing Thanos Rising. On repeated plays, the amount that luck of your initial setup figures in your ultimate success or failure is a bit of a miss, but I don’t think that will impact the enjoyment of the game for many people.

Final Score: 3.5 Stars – A great use of the Marvel universe. Lots of the characters and items you know and love in a light but fun package.

Hits:
• Awesome table presence with giant Thanos
• Integrates the MCU perfectly into a board game
• Players can interact with each other by using the bonus tiles to help each other.

Misses:
• The random distribution of villains can have a huge impact on your chance to win.
• You’ll see almost all the cards after just a couple plays, would be nice to see more variety.