We review Tavern Masters, a fantasy-themed card game published by Dan Kriss Games. In Tavern Masters, players are trying to run the most profitable tavern in all the land. 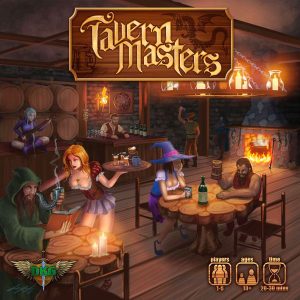 Parties in role-playing games would not know what to do with themselves if it was not for the existence of the friendly local tavern. Providing wayward adventurers with the promise of food, drink, lodging, and employment opportunities, taverns have found themselves at the center of attention for adventurers as long as there has been tabletop RPGs. In Tavern Masters by Dann Kriss Games, you take on the role of a proprietor, trying to make your tavern the most successful of the bunch. Let’s step inside and see what adventures await!

Tavern Masters is a tableau-building game for 1-6 players, that plays in about 30 minutes.

Tavern Masters is played over a series of rounds, representing a day’s business at your tavern. During the Day Phase, you purchase and play cards from your hand that represent various foods, drinks, and games your bar can stock to attract patrons, as well as employees with varying powers and abilities. You can also trade cards with your opponents during the Day Phase.

Once the Night Phase begins and the bar opens, patron cards are played, so long as certain requirements for each patron are met. These patron cards also have special powers and abilities that can be activated when played, granting you options to play extra cards or earn extra gold. At the end of the night is the Counting the Till, where you earn gold for each patron in your tavern. If your tavern’s offerings and a patron’s likes match up, they will stick around in your tableau, otherwise they are removed. The game ends when a player earns 20 gold, making them the most successful tavern master!

The Dockside expansion adds a Song and Port deck, giving you new options and card powers that correspond to a seaside tavern. The Dirty Deeds expansions provide for player interaction, adding an extra phase before Counting the Till where tavern masters can mess with their competition in a variety of ways. The Tavern Menu expansion provides a deck of variant play rules, with different game end conditions and modifiers that can affect gameplay.

Tavern Masters, as a base game, can be simply replaced by flipping a coin and determining a winner. The composition of your opening hand will determine whether or not you will win, and there is no getting past that. Strong hand? Winner! Weak hand? No possible chance for you to recover. In our plays, once players fell behind and the leader started pulling ahead, we could have simply ended the game instead of prolonging the agony, since there is quite literally no way we could figure out how to catch up. The game definitely starts slowly, but once one person gets their engine rolling; it is game over.

Player interaction is virtually absent, making this an exercise in multiplayer solitaire. Sure, Tavern Masters includes rules for trading, but maybe that happened once in all of our plays. Ostensibly, the trading rules are included to help attempt to offset the luck-based card draws that drive your turn, but we found that there was simply not enough incentive to engage in trades, either because you were in the lead and you had solid card draws, or you did not want to help your opponent because the instant they got an advantage in building their tableau it would quickly propel them to victory. All in all, this game felt like it needed more testing and more mechanic tweaks to improve the gameplay.

We love tabletop RPGs, and it is well-established that we get enjoyment out of creating narratives with our games, and Tavern Masters, sitting on the shelf, appeared to be able to give us the kind of gaming experience we love. This could not have been further from the truth—playing through the game felt lackluster and repetitive. It is more an exercise in counting icons and coins rather than an immersive and thematic game. The art and design could have gone a long way to help add to the experience, but the artwork and graphics of the game are just flat out ugly. There is so much to work with given the theme of a tavern in a fantasy setting, but Tavern Masters left our mugs empty.

Fantasy RPGs and RPG art, in general, have a long history of being problematic, and we applaud and celebrate publishers who work to move away from oversexualized imagery of women in their games. Tavern Masters, replete with pictures of busty barmaids and women fighters wearing completely impractical gear, sadly has quite a way to go in this category. Yes, it does show a number of fully-clothed ladies, but that does not iron out our issues with the artwork (or the term “wenches” for that matter.) It may not be a bother to some, but it definitely stood out to us as an area for improvement.

The one saving grace to Tavern Masters was the inclusion of the expansions, most notably the Dirty Deeds expansion. The Dirty Deeds expansion allows players to gang up on the leader, at least allowing some chance of catching up. However, we found that this ended up devolving into another luck-dependent victory, namely the person who was fortunate enough to take their turn after all players had spent their take-that cards (ala Munchkin). While it adds some variety, it is not enough to make any sort of mark. The variant rules are nice, but a few of them extend the game by changing the win conditions—we would leave those in the box where they belong.

Tavern Masters is analogous to every plan my current RPG party undertakes: good in concept, poor in execution. The gameplay is completely luck-dependent, repetitive and boring, with no catch-up mechanism, and no player interaction. The expansions in Tavern Masters give it a bump in quality, but a small one to be sure. We wish we could say that it at least looks nice, but even the art and design found us wanting.

Final score: 1.5 Stars – This tavern gets a bad Yelp review.