We review Tapestry, a civilization building game published by Stonemaier Games. In Tapestry, you are tasked with taking your fledgling civilization from the early eras to the modern age. 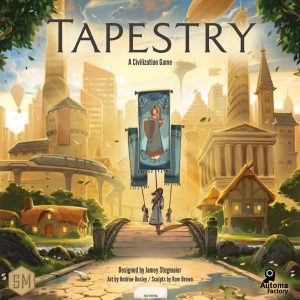 Rub rub. Rub rub. WHOOSH. FIRE. You’ve done it. You’ve controlled fire. Nothing is going to stop your civilization from taking over the world now. Before you know it, you’ll be headed to the moon and deploying mechs to vanquish your enemies. And you’ll do it all in under 2 hours.

That, anyway, is the promise of Tapestry. A beginning of time to modern (or near future) civilization-building game that isn’t going to take you all day. So, how does it work, and does it fulfill its promise? Time to find out.

In Tapestry, you’ll start the game being given two different civilization powers and choosing one to represent your people in the game. Additionally, you’ll get a capital city map that you’ll try to populate with buildings and landmarks. These civs will give you a unique ability that you’ll be able to use throughout the game.

Getting your civilization is a huge part of the game as it will often give you a direction for the rest of the game. From there, each turn you’ll either take an income turn to earn points and gather resources, or an advance turn to progress on one of the four tracks in the game.

You’ll only take five income turns in the entire game, generally when you are out of resources to spend on other things. When you do, you’ll get to activate your civilization and play a tapestry card which gives you another unique bonus, some of which are a quick injection of resources or points, while others give you an ability for the entire era.

On an advance turn, you’ll have to spend some resources and then you’ll gain benefits and optional bonuses. While there are some different rewards on each track, generally they work as such:

Unlocking building along these tracks allows you not only to populate your capital city, but each building is covering up potential resources and victory points. When you take an income turn, you’ll gain points and resources based on what is showing on your personal board. So, the more buildings you’ve placed, the more stuff you’ll get.

Each track works well with the type of scoring it unlocks. For instance, the more you move up the military track, the more armories you’ll unlock and the more territories you’ll control on the map. And some of those armories are covering up spaces that score you a point for each territory.

You will also score for developing your capital city. The capital city map is made up of a 9×9 grid, but some of the squares on each map are impassable. During an income turn, you’ll score for each completed row and column. Each 3×3 section is a district and completing those rewards you an additional resource. As you unlock each income building, you’ll want to keep this in mind as you place them into your city.

You can also fill your city with landmarks that are awarded for being the first civilization to reach a new tier of each progress track. These landmarks are represented by prepainted minis that really do give you more of a feeling of building something. The production on these are top-notch.

The game ends once all players have taken their fifth income turn. The player with the most points is the most advanced civilization and has won the game.

Without a doubt, the civilizations in Tapestry will lead you down a different path every time you sit down to play the game. Some give you a more focused direction while others can be more flexible, but in either case, taking advantage of your unique ability will lead you down the path of prosperity.

Once you have that direction, you’ll likely choose a track or two to focus on. It’s not just the civilization that leads you down this choice but also what your opponents are doing, the tapestry cards you have available, and the territory tiles you explore. In my games so far, all roads seem viable. Games have been won going heavy into science and technology and not worrying about expanding your control over any additional territory. But taking over as much of the map as possible and gathering bonuses as you do it can pay off too.

The only strategy that doesn’t seem terribly fruitful is an extremely balanced approach of going up every track. You’ll likely make some progress on all of them but ending the game near the middle on all four is probably not going to work for you. Specialization is necessary. Adam Smith would be proud.

Turns in Tapestry are generally lightning quick. On an advance turn you really only have four options. Pick a track to move up, pay the resource, and get the benefit. But there is a lot packed into those decisions. You need to consider the resources you have available and what you want to do your next couple of turns. It’s much more about the long-term goals for your civ than the short-term impact. Conquering territory is nice and all, but it doesn’t really provide a ton of value until you find a way to clear more of the armories off your income mat so you can score all those points during the income turns.

There isn’t much in the way of combat, although you can attempt to topple a territory controlled by another player. Their only potential defense is that a small number of the tapestry cards are “traps,” which can be played in this scenario to cause the conquer to fail and grant you an additional resource. The would-be conqueror still gets most of the benefit of rolling the military dice from their conquer action though, so it’s not overly punitive.

The reality here is that Tapestry is a cleverly themed euro. And a great one. You’ll have to carefully manage your resources and your hand of tapestry cards. Gaining technologies to give you additional income buildings, points, or resources. Interaction with other players exists as you have small fights over territories, and you’ll want to be the first up some tracks to earn landmarks. But you can form your strategy without having to worry too much about everyone else if you choose to.

As a “civilization” game, I think it’s fair to say Tapestry doesn’t come across like fans of the genre might expect. Personally, I abhor the desire gamers seem to have to make a game fit in an exact box—mechanically or thematically. But Stonemaier has put “A Civilization Game” right on the front of the box here and makes it worth digging into how much it fulfills that promise. The biggest concern I have in that regard is that as you progress on the tracks, invent technologies, and travel to space, the payoff isn’t really huge.

You discovered warships? Cool, conquer a territory. Yeah, that was the same thing you got when you figured out archery a few centuries ago, what of it? Remember when we floated a raft and explored a new tile? Now we have trains! So yeah, we explore a new tile. And space? The final frontier!? We’ve made it…have 4 points and a house. Mastering herbalism also gave us a house though. But … 4 points!

It isn’t that there is no progression, but it’s minor. It works very well within the game as having too big of a payoff on the ends of the tracks would really limit some of the strategic options. The benefits do get better, but only marginally so. If you are expecting complicated tech trees with abilities that ramp up considerably as you approach the modern age, you aren’t going to find it here.

Also, of note: the game ends for each player after they take their fifth income turn. That won’t necessarily be at the same time for everyone. In most of the games I’ve played, it’s only left a player waiting 5-10 minutes after they are done for everyone else to wrap up. At the extreme though, it was nearly half an hour. This is probably abnormal but definitely possible and—especially because the player to end that early probably didn’t do very well—feels pretty bad.

Tapestry is a great civilization themed euro. Is it a “Civ” game? There will likely be lots of arguments over that question. But who cares? It’s easy to teach, plays in 30 minutes or less per player, and is a ton of fun. The unique civilizations and the huge number of tapestry cards give you new direction every game and make for interesting experiences. There are several paths to victory, and I have enjoyed every play of Tapestry more than the play before it. That can’t be said about many games today.

Misses:
• Civilization theme is arguable, and progression feels minor throughout.
• Players will end at different times.