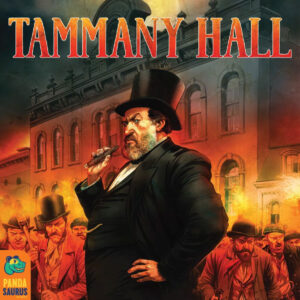 Let’s take a trip down memory lane. Remember the 1850s? Maybe you’re a bit younger, so how about the 1870s? Me neither. Well, you at least have a soft spot for that historical era. Right? Immigrants settling in New York and gangster-level corruption from the likes of Boss Tweed, stealing, bribing, and taking bribes to determine where and how well people could live.

Okay, so reading about the political machine that is Tammany Hall makes my skin crawl. It’s certainly striking what Boss Tweed was able to accomplish through illegal and immoral means, but does that make it a good theme for a board game?

Tammany Hall is a 3-5 player board game of negotiation, area majority, and auctions with minimal randomness. A full game takes about 90 minutes. This review is for the newest (5th) edition published in 2020.

In Tammany Hall, the map board is broken down into three zones, each containing a number of wards. Depending on the number of players, the map will start with one or two active zones, meaning they have immigrant cubes placed in their wards and ward bosses (meeples) can be placed in them.

The game is broken down into 16 rounds or “years.” Every 4th year will end with an election to determine who controls which areas and gets the associated benefits. On a player’s turn, they can either place two ward bosses in any one or two active wards or place one ward boss and place one immigrant cube from castle garden onto any one or two active zones. The second action is referred to as “settle” as in you are helping an immigrant group settle in a specific ward. For taking that action, you are granted a favor token for that same immigrant group.

After four rounds of placing ward bosses and immigrant cubes in active wards, an election is held. Any player with a ward boss in a ward will take part in that ward’s election. In each active ward, ward bosses are counted for each player, which give a base of 1 vote each. Then, players can simultaneously (closed fist) bid favor tokens of any immigrant groups represented in that ward to increase their votes by that number. Whichever player ends up with the most votes wins the election and keeps one ward boss in that ward. All others are removed.

After all elections are resolved for that election year, scoring takes place. First, immigrant leaders are named. This is one of the best ways to earn favor tokens. Whichever player has won wards that contain more of any immigrant type than the other players, gets three favors of that type and becomes the immigrant leader for that population. There is a hierarchy here defined by the game when it comes to political favor. For certain tie-breaker situations, players first check who has the most Irish political favor tokens, then, if needed, they’ll compare English favor tokens, then German, then Italian.

Back to scoring; players will gain one point for each ward they won and two points if they won Tammany Hall (which is otherwise just another ward). The player who won the most points is awarded the title of mayor for the next four rounds. That title comes with three victory points and a whole lot of power. The mayor must assign city offices to all other players that will persist until the next election. These offices have unique and thematic powers such as removing immigrant cubes (chief of police) or locking down a ward (council president). Every player gets a city office and they are all pretty powerful.

After the fourth and final election, the usual scoring happens plus the player(s) who has the most unspent political favor of each type gets two victory points.

Regardless of how convoluted my gameplay overview was, this game is super simple to teach. Furthermore, the board references every single rule, so you pretty much never have to open the rulebook back up. I love that.

Now, understanding how to do well in this game is a different story. In your first play or two, the actions you take and the points you score can feel disconnected, but I can assure you that’s not the case. You get 16 turns during the game and each one is consequential and grueling. You will need to balance having enough ward bosses on the board, which immigrant cubes are represented where and how many of each, who you are competing with during each election, and how many and which political favors you have. I’m getting a little anxious just thinking about it.

Furthermore, if you can do well enough in elections to become mayor, you need to decide if you actually want to do that. Being mayor puts a huge target on your back. This is a political game, after all. Players can and should be looking at who has the most points and colluding to slow them down, while making their own run to squeeze out victory in the end. Being mayor when you’re in the lead and having to give out those city offices can put a knot in your stomach. It’s like deciding which knife to give each player to stab you with. Those decisions are another make-or-break point. Give someone the city office they want, and maybe, just maybe, they won’t use it against you.

When it comes to scoring, this game makes cubes fun again. Manipulating which immigrant cubes are represented at what levels in each ward is key to success. You mainly do this using that settle action as well as some actions that city offices allow you to do. Then you have the blind bids for each election. As if you didn’t have enough angst on your turns, the elections are overflowing with tension. You need to determine which elections you can win and which favor tokens you’ll need to spend to do so. All the while, you need to consider who you’re up against for each other election. Every token matters, especially considering leftovers go toward tie-breakers and end-game scoring.

This game brings a lot of emotions to the table. You’re acting as a corrupt politician and downright evil person, treating immigrants as pawns to be manipulated for your own gain. That’s a heavy moral load in itself to carry. On top of that, this is a brutally mean game. Definitely not for the faint of heart. If you can’t separate in-game actions from the real world, pass on this game. I, however, marvel at the amount of feeling this game can create with some cubes and meeples. I was so very hesitant on the theme, but it’s far from pasted on, and I think it adds to the experience overall. The mechanisms, especially the city offices tie into Tammany Hall so well that I really can’t imagine it working another way.

Tammany Hall has the feeling of an evergreen classic. It’s no wonder why they keep bringing it back with new editions after more than a decade. It has no frills and not a single rule felt out of place. The theme, while dark, fits like a glove.

Every decision in Tammany Hall is painstaking and you must consider the other players at all times. There will be high-stakes negotiation and betrayal. It’s absolutely brutal. Turns are quick and the game is over in about 90 minutes. I’m a sucker for simple rulesets that produce deep experiences.

Hits:
• Lots of tension from start to finish.
• Clever balancing act between board state
• High-stakes bidding during elections.
• Super interactive for a euro-style game.
• All the rules are on the board.
• Theme ties in perfectly.