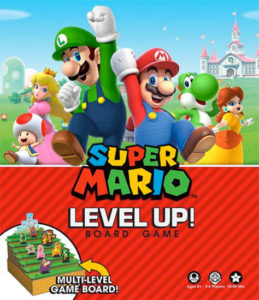 Anytime I see a board game that has an iconic figure from popular film or show on the cover, I become skeptical. I have seen way too many versions of Monopoly, Scene It, and Clue that I know the original game is hiding just under the surface trying to lull me into a false sense of security. Today, we will be looking at a game that uses characters from the Super Mario universe.

In Super Mario: Level Up! Board Game, players will be moving thirteen characters up the 3D board trying to claim the most coins by having their collection of characters being near the castle when the round ends. Does this game hold up to the greatness of the Mario series? Here we go!

Super Mario: Level Up! Board game is a strategic movement and bluffing game for 3-6 players to play in around 30 minutes. In my experience, the game plays best with only three or four players.

The game has a simple premise of earning the most points over three rounds of play. Each player will be given a set of No vote cards and one Yes voting card. Finally, players will be given a lineup card depicting the six of the thirteen characters which you will be scoring points, based on their location, at the end of the round.

The characters are placed on the stairs by the players one at a time and then put ? Blocks on any row that doesn’t have 4 characters to be claimed during the round. These ? Blocks can grant players extra movement, victory points, lose a turn, or access to a power up card that can affect both the placement of characters on the board and voting procedure. Players will move one character each round until one character is moved up to the highest point.

This starts the voting phase, where each player is required to vote on if this character will be the champion for this round. Anyone who has this character on their lineup card will vote yes attempting to crown that character champion and earn the maximum amount of points. However, if at least one person votes “no”, that character is moved back to the lowest level of the stairs. All players that used a no vote lose that card for the remainder of the round.

Characters will move around the board until one is crowned the winner. Each player will earn points for the location of all the characters in their lineup. Players will then clean off the board and reset for the next round. The game plays exactly the same for three total rounds with the player with the most total points declared the winner.

After playing Super Mario: Level Up! I get the same feeling that I have with most games that use an intellectual property. That the characters and themes from the IP are the finishing touches of the game rather than an inherit part of the design process. The game mechanics were not built around this Nintendo property, in fact, this a retheme of a game from quite a few years ago called King Up! Luckily, the base game melds well enough with the Mario theme to make this an enjoyable family game.

The actions in this game a very simple, however there is a lot of choice when it comes to moving a character and with voting that keeps players engaged. Regarding movement, it makes more sense to hold back your characters from reaching the summit early in the game. With players hands full of No votes, it’s unlikely that early characters up for voting will be crowned champion. You can move your characters on the lower part of the board early on to higher tiers or even move characters not on your card up for voting just to cast that deciding No vote to hurt other players.

Players could also hope that another player will cast the No vote but there is no communication before the voting, so it leads to a nice push your luck element as you decide when to use your votes. Since you only can use your No cards once a round, the timing of when you play them is important.

While the movement up the board isn’t overly deep, there are the ? blocks along the way that make it slightly more interesting. These ? blocks have a nice mix of power-ups from the Mario games that players can choose to use later or immediately. Most of them are the simple lose your turn or move up/down, but some have very powerful effects and the coveted Power Up cards.

The Power Up cards can be used to cancel votes, force a player to vote before everyone else, or swap locations with two characters just to name a few. I love these cards and wish they were used more in the game. They are quite powerful and lead to some interesting turns in the game. My son has canceled out my No vote a few times and was grinning ear to ear as he did it.

The game is super light and is ideal for families. It was also simple enough for my youngest (5) to implement strategies as we progress through the round. This isn’t a game I would bring to a game night with adults because mechanics do start to become a little too repetitive by the third round. Having the kids playing with you keeps the game exciting as they try to figure out the best way to move up the board.

Super Mario: Level Up! Board Game fits nicely as a family game. The movements are simple but the added bluffing and strategic nature of which characters to move keeps the game engaging enough for both young and old. However, the game doesn’t have the strategic oomph I’m looking for a game night with my friends.

The ? blocks and Power Up cards add just the right amount of randomness to inject some entertaining moments. The use of Mario characters works decently in the game. The game play is solid enough in Super Mario: Level Up! Board Game to enhance the use of Mario universe and would of been a worse game without it. The game is currently one of my five year old’s favorite and one I would definitely recommend to parents with kids 5-10.

Final Score: 3.5 Stars – A simple family game that can be enjoyed by all ages as they strategies how to be the champion at Princess Peach’s castle.

Hits:
• Interesting 3D design of the board
• Good balance of simple mechanics and meaningful decisions
• Interesting abilities with Power Up cards

Misses:
• Actions can get repetitive
• Some ? blocks abilities are boring
• Paper scoring cards ran out quickly