We review SpaceCorp, a scifi board game published by GMT Games. In SpaceCorp, players are trying to run the most profitable company over three different ears. 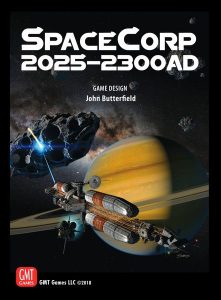 “Ummmm,” I started, trailing off.

“I am out of here. This planet is running out of resources. Also, that game has taught me all I need to know about space travel.”

I literally had no reply.

“Tell Andrew he can take over BGQ. I’d let you, but you gave Marvel Dice Masters 4 stars.”

With that, he sealed his helmet and walked away.

SpaceCorp 2025 – 2300 AD (SpaceCorp going forward) is a board game about space travel and exploration during three different eras. It is also based on a book, appropriately titled SpaceCorp, that I have not read.

The game is played over a variable number of turns. A turn is made up of six phases (seven in the third era) as follows:

The era ends when either six of the seven contracts are fulfilled or the action card deck runs out and a player either voluntarily passes or cannot perform an action. The player with the most cumulative points (profit) after three eras is the Best Space Explorer Evah (and the winner!)

I wanted to love this game. I LOVED the premise. An easy to play card game spread across three different eras, represented by three different game boards, with each game board having a slightly more complicated ruleset than the previous one. When you finish the first era, Mariners (2025-2069), you start the second era, Planeteers (2070-2149), where the first era left off, with the same transition happening for the third era, Starfarers (2150-2300, also NOT from Catan). You can also take one Legacy Production, if built, from the previous era into the next era. Finally, you can earn a starting bonus if certain criteria were met in the previous era.

The card play is simple, but also what I enjoyed the most. You can play multiple cards with the same action type from your hand to increase that action’s effectiveness, such as moving one of your teams. To perform the move action, you will need to calculate the move value to cover the distance from one site to another, as well as the potential impact of gravity, taking off and landing. It is not complicated and, after moving a couple of times, it becomes second nature.

The required value for exploring (leading to valuable discoveries), building (establishing bases that provide different bonuses), or producing (generate points) is MUCH simpler—simply look at the value in the space and equal or exceed it with your cards. But what should you do if you cannot play enough cards to perform the action?

Infra is the answer! Infra, short for infrastructure, can be used to boost the action. You can use either your or an opponent’s Infra to accomplish this. (Note: your opponent gets a free card as a reward if you do). Each player has a player board with four slots for Infra. Players can use the upgrade action to play a card to one of the slots for that turn as long as that card indicates it may be used as Infra. If one slot has move 1 and another has move 3, you would have a permanent boost of move 4 and, yes, Infras carries over across eras. Building Infra leads to potentially large boosts, but at the cost of actually moving, exploring, or building bases on the board. I enjoyed balancing building Infra vs. taking actions on the board due to the limited board spaces, especially as the player count increased.

Of the three eras, the Planeteers era was my favorite. Mariners is a pure race and, after a couple of plays, can easily be completed in less than an hour. Planeteers expand the number of available sites, but also added new mechanics that I liked, such as a sideboard for bonus cards, shielding your teams from radiation, and sacrificing points instead of using Infra. The decision space is expanded in Planeteers, yet there is still competition for sites. Again, higher player counts increase the competition.

So, I said I wanted to love this game; unfortunately, I did not. There are two significant issues I had with the game.

The first is the star systems in Starfarers. In the Mariner and Planeteer eras, each site can be contested. One player can explore a site and another player can swoop in and build a base. In Starfarers, when you get to a star system, your team is put on a three space star track. At the start of each player’s turn, their teams that are on star tracks move one space. Once a team moves off the last space, it is placed on the star. That player can then explore that star system and ALL of the sites are explored for that system. Compounding my dislike for this change is that it is very difficult to pass someone up on the track. This leads to no one competing for sites because, in most cases, you would be better off exploring and building at your star system

SpaceCorp is a decent game with, in my opinion, a couple of glaring issues. I would recommend people try the game before they buy it. After playing SpaceCorp several times, I felt unsatisfied, like an opportunity for a grander game was missed.

Final Score:  2.5 Stars – A game that had some great potential, but ultimately left me wanting something better.

Misses:
• Starfarers is a disappointment when compared to Mariners and Planeteers.
• Start card balance issues distracted from the offer.
• The execution of the premise, especially with the carryover rewards from era to era, was underwhelming.