We review Songbirds, an area control and hand management card game published by Daily Magic Games. In Songbirds, players are trying to score the most points by playing their birds into a grid. 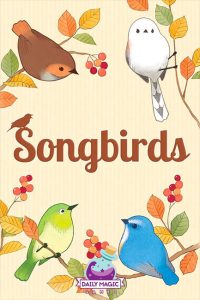 A dense rulebook and a table full of components are not necessary for tough decisions to be present in a game. In fact, some of the hardest decisions I’ve seen in games come from those that are just a deck of cards and maybe a couple of tokens. Examples for this include Race for the Galaxy, Fantasy Realms, and The Fox in the Forest.

Songbirds fits in with those games, sporting a deck of 28 songbird cards and ten berry tokens that are used in the basic game. It’s not a long game, finishing up in about 15 minutes. It’s playable with 1-4 players, but I personally think this is best at three players.

The basics of Songbirds are quite simple. In a three-player game, all but one of the 28 cards are dealt to the players. The remaining card is placed face-up in the center of a 5×5 grid that is created by placing the berry tokens in two lines that make a right angle (see the picture if my description is a little foggy). Then, starting with the player who most recently won a game, birds will be added to the grid.

Each songbird added much be adjacent to one that is already played to the grid. There are four colors of birds, each suit ranging from 1-7 and having one copy of each card in the entire deck. Only be five birds may be played in a row and column. All but one card in each player’s hand will be played.

When a row or column is filled, it is scored immediately. Whichever color of songbird is the loudest (AKA has the highest total) receives the berry. If there is a tie between multiple colors of birds, then they are skipped over and the next-highest receives it. Each berry is awarded, with the four birds each having a score. Then, all the players look at the card they held on to. Whatever color songbird a player keeps is the color of songbird they score, in addition to the number on the card left in their hand. Whoever has the highest score is the winner.

What gives Songbirds difficult choices determining what your opponents are keeping back to score. The entire deck is dealt out to players (minus one card in a two-player game), so if a card is not played to the grid it is most definitely in a player’s hand. You’ll stare at the backs of cards that one player is holding up, dying to see through the card and see the number and color printed on the other side.

Tensions build as each card is played, both revealing which birds will score and narrowing the choices players have for their held-back card. This is where the game shines. Similar to other small card games, Songbirds does a lot with a little. While each turn is quite easy, the mind is mathing out the possibilities of not only the possible cards to play, but where other players will play theirs. It is smart, and also does it in an incredibly short playtime.

The components are nice in the game as well. The theme in Songbirds could honestly be anything, but the birds are cheerful to see on the table amid almost silent hostility. The berry tokens also bring an extra amount of color that should be appreciated next to the cream backings on the cards.

As for comparisons, the most obvious one will be Renegade’s Arboretum. Both games feature difficult decisions and pleasing art. Songbirds plays in half the time and is played in a shared space. But while you think that the shared space would make for a meaner game, Arboretum is much more cutthroat due to maintaining a hand of seven cards. That then forces a rougher time in deciding which cards to keep and which to discard.

But enough on the comparisons. Why might people not like Songbirds? It can be a bit mathy, which can be a con for some. Down to the final two cards in a hand, playing one versus the other can create cascading effects for which birds get which berries. And playing the wrong card can completely cut you out of the game.

There is also the issue (like many simple card games) where a bad hand is harder to manage. Having a hand with lower-numbered cards tends to be a lesser hand than one with multiple six and seven birds. It’s not unmanageable, and smart players can manipulate those high numbers in other hands to be played in a manner that benefits their score. But without drawing/obtaining new cards throughout a game, some hands with start out better and that do not change. Luckily the game is short, and even comes with scoring cards to keep track for multiple games.

Songbirds is a quick filler that isn’t brain dead like many games that fit into the same time-slot. Decisions can be tough and are generally present in stand-out games. Smart play is required, and overthinking could be present when playing. I still recommend Songbirds as a nice card game to give a try.

Final Score: 3.5 Stars – A quick playing game that offers a lot of bang in a little package.

Misses:
• Quite mathy, causing potential AP
• Starting hands can be imbalanced
• No new cards throughout the game