Board Game Review by::
Chris Sacco

We review Sobek 2 Players, a tile drafting game published by Pandasaurus Games. Sobek 2 Players is a 2 player only version of the Sobek board game designed by Bruno Cathala. 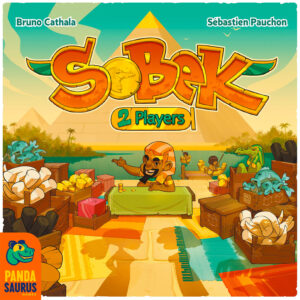 It’s a well-known fact around Board Game Quest headquarters that I don’t have any friends. Now the reasons for this are under some debate. Is it simply that every other person in the world doesn’t meet my lofty standards for friendship? Or does it have more to do with logistical complications pertaining to the needs of sustaining a successful platonic relationship? The truth? I can be a lot to handle and most people actively avoid interacting with me unless they have to. (Be sure to join our Discord channel if you want to experience what it’s like to chat with me in cyberspace! It’s not great!)

Therefore, in addition to my duties as the site’s resident movie person, I’m also one of the go-tos for any game made specifically for two players. (And even this only works because I’m able to force my wife to play games with me. She technically doesn’t even qualify as a friend.)

Sobek 2 Players is a reworking of the original up-to-four-players Sobek (which I have not played since, again, I only know one other person). It’s designed by Bruno Cathala, the original game’s designer, as well as Sebastien Pauchon.

Sobek 2 Players is a set collection game in which both players will be taking tiles off a shared market into their hand. Before the game starts, tiles are arranged in the market in a fun although somewhat inconsequential way by starting at specific spots on the board and filling things in a clockwise manner. It is pretty neat how it works although for the life of me I could not figure out if there was a mechanical reason why it was required that players had to fill the board in this way.

On a player’s turn they can take one of three options: take a tile from the market, play a set of three or more like tiles from their hand to their own personal playing area, or use a character tile they had previously acquired for its one-time power.

When taking tiles from the market, tiles can only be selected from a specific row, column, or diagonal on the board at any given time. The direction in which players can select tiles is determined by an ankh pawn. Depending on which tile was taken last, the ankh will be positioned based on markings on the previously selected tile. So, for example, if the tile that your opponent just took had markings vertically on its top and bottom edge, only in tiles in that column are available on the next player’s turn. The only time the ankh’s position is determined by the players is when they select a character tile from the board (or occasionally with certain one-time powers characters may provide).

If the ankh is ever pointed to empty spots or there are no available tiles to take, players refill the board and reposition the ankh in the center after taking a tile. Players aren’t limited to selecting only adjacent tiles either. They can go as far down the specified line as they want but any tiles they skip over will get added to their corruption board. Whichever player has the fewest corruption tiles at the end of the game will get a scoring bonus.

The second thing players can do on their turns is lay down a set of like goods in front of them. The played sets must contain at least three tiles and any additional like goods players add on later turns must also be in increments of at least three. If you acquire a Sobek statue tile it acts as a wild and can be a part of any set. Whenever players choose this action, they also get to take a pirogue token from the edge of the board. These are incredibly powerful events that range from granting bonus points in the form of deben tokens, additional turns, or drawing extra tiles into one’s hand. These pirogue tiles are limited, so it’s worthwhile to put out sets earlier in the game.

The third thing that a player can do on their turn is use the characters for their abilities. Most of the characters in the game also can be added to sets based on which type of good the character sells in the market, but that is done as part of the last action and doesn’t trigger the powers. These mostly involve disrupting the flow of the game or granting extra tiles. Some are attacks against your opponent that add corruption or force them to discard tiles.

Play continues in this way until no possible moves can be made on the market board at which point players will add up their points. Points are scored based on the number of bonus tokens players have in addition to the goods in each player’s area. These score based on their quantity multiplied by the number of scarab symbols visible on all the tiles across a particular good’s set of tiles.

The two-player only game space is getting increasingly crowded every year as designers take some of their most beloved games and rework the mechanics. 7 Wonders Duel is probably the most successful example, but there are also games like Yokohama Duel and the upcoming Splendor Duel and Tokaido Duo, both of which I’m curious to try. Sobek 2 Players is an interesting situation for me because I’ve never played the original despite it having been designed by one of my favorites, Bruno Cathala.

I’m pleased to announce that I really enjoyed this version of the game. It’s one of the rare games that actually has more depth than you would think just by looking at it. Typically, games look as though they are difficult and then end up being fairly straightforward in the types of decisions and actions players can take. Sobek 2 Player, on the other hand, looks like a very basic two-player game with a relatively small footprint but then has some interesting layers to the type and uses of tiles and the timing with which players should be taking certain actions. Don’t get me wrong, this is not a complicated game by any means but there is more depth than I was expecting even if more or less every turn plays about the same.

The game also has a nice pace to it as not only do turns go quickly, but there’s a logical flow to the arc of the game. Selling goods early gets players those bonuses, but it also means players will have to have a more restrictive strategy early on in regard to which tiles they go after. Wait too long to sell any goods, however, and you miss out on those potentially game-changing powers.

There were a few design quirks that I didn’t quite understand. Set up is strange and seems more like a gimmick than actually a functional process. (It even has a very specific section in the rule book to lay out the steps but in actuality, players could probably just fill in the board in any manner without it making too much of a difference.) The character tiles—which are obviously the most powerful—are displayed face down in the market. None of these characters are negative and for the most part they do seem balanced, so I found it strange why this information was kept secret. I suppose it creates something of a push your luck element where taking a lot of corruption for a power that doesn’t line up with one’s plan is a waste of a turn, but honestly, it just seemed like they should be displayed face up so players can decide based on the information in front of them if it’s worth taking corruption to reach farther.

I enjoy Sobek 2 Players about as much as I expected to which is always a good thing. I’m not sure it rises to the level of something like 7 Wonders Duel, but few games of this or any type do. This is a straightforward set collection game that uses an interesting market selection mechanic. It’s also small enough to act as something of a travel game which can’t be said of other games in the two-player only category. (It’s not incredibly small but essentially all you need is the board and a little tablespace.)

Final Score: 3.5 Stars. An above-average two-player only game that’s an interesting take on set collection and carves out a fitting place among games of its type.

Misses:
• Set up is clunkier than it needs to be 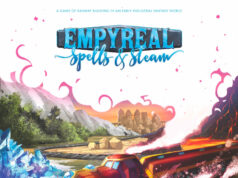