We review Snowblind: Race for the Pole, a push-your-luck dice rolling game from Pleasant Company Games. In this racing game, players are trying to be the first to make it to the south pole and back to their ship. 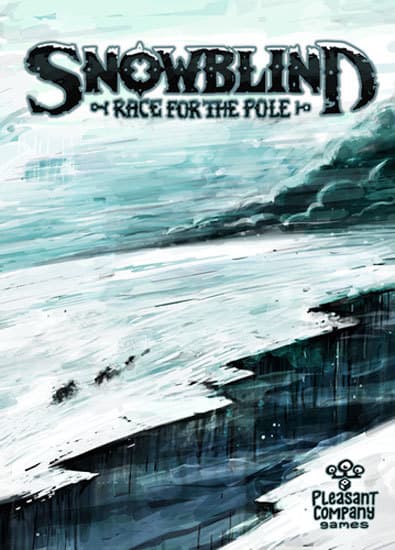 Pleasant Company Games is doing some interesting things with dice. We reviewed their first offering a while ago, a game called Ancient Terrible Things. This Lovecraftian dice game was quite enjoyable and I tagged it in the review as “Yahtzee if Yahtzee were fun”.

Well Pleasant Company Games is back on our tabletops with another dice game, this time in the form of Snowblind: Race for the Pole. Instead of a Mythos-themed adventure through the jungle, Snowblind has players racing to the South Pole.

Snowblind: Race for the Pole is a press-your-luck race game for 1-4 players that takes about 30 minutes to play. Snowblind plays well at any player count.

In Snowblind, players are trying to be the first to make it to the South Pole with their captain, and then back to their ship. This is accomplished through the use of dice actions. There are a variety of different dice in Snowblind, and each action requires the player to roll an increasingly larger pool of dice. The dice results may cause you to spend supplies or even kill explorers as the elements take their toll. Once the Pack Ice weather card is revealed, the game ends and the player with the most points is the winner.

Pleasant Company Games did a great job with their first offering, so I had high expectations for Snowblind. And overall, I think they matched the quality of their first game.

Snowblind comes with a pile of wooden components in the form of explorers, food crates, tents and barrels. These will be used to track a player’s progress as they reach for the South Pole. The game will track a players progress with their flag token. The flags do include stands, but they were too loose to be of any use. We ended up having to just lay our flags flat.

The game also comes with a handful of six and eight sided dice in a variety of colors. Except for the green die, which is blank, the dice are all of standard fare and work fine.

Once each player has chosen their nationality (only thematic difference) and the board is set-up, you are ready to begin.

Snowblind is played out in a series of rounds, with each round being broken up in to multiple turns. On a players turn, they must choose one action. To take an action, they choose one of the available risk dice on action board and add it to their dice pool. They then compete the action associated with the chosen die.

After a player finishes their action, they roll ALL dice in their dice pool. Even ones from previous turns. Depending on the result of each die, a player may lose explorers or supplies. (supplies go first, then explorers).

Then the next player takes their turn. Players may take as many turns as they want, until they decide to pass. Once all players have passed, the round ends and a weather card is drawn. The dice are then returned to the action board and the first player token is passed.

The game ends once the Pack Ice card shows up in the weather deck. If a player gets their entire team back to base camp before that, they simply wait for the game to end.

Players earn points for camps and crates on the board, explorers who made it back to base camp, and research tokens. The player with the most points, wins.

Snowblind is a ruthless game and it makes no pretense of hiding that. From the desolate artwork of the game board, to the quickly diminishing pile of supplies, expect your explorers to take a beating. This is the part of the game that really shines through with its theme.

I don’t think anybody expects a trip to the south pole to be easy. And as a press-your-luck race game, this theme works exceptionally well. I really like how the actions dice system works.

Things always start off easy at the beginning of the round. You choose a die, move your explorers, and hope you’ve set them up to succeed. But as the round presses on and your dice pool gets larger and larger, that’s where your risk tolerance starts to weigh in. One really unlucky roll can have devastating effects on your team.

And that’s one area I could see people having a problem with Snowblind. There really isn’t any sort of dice manipulation. Much like how participation ribbons are the butt of many jokes, there are just as many games today the do everything they can to scale back the amount of luck the dice dump into a game.

Not so with Snowblind. If you get a bad dice roll, you’re screwed and there isn’t much you can do about it. The best you can do is try to set your group up for success. If you have to roll a lot of dice, then you better be darn sure you have enough food crates to offset disasters.

And by the same token, there is no catch up mechanic in Snowblind. Get a bad roll? Too bad, you better make do. There is even player elimination. If you screw up and leave your captain exposed? Tough it’s game over for you.

Whether all this luck-based nastiness is good or not really depends on personal preference. Regardless, I do think it fits the theme very well. The weather is something we can’t control, so I’m sure that’s something explorers on the south pole have to contend with. In either case, Snowblind is a fairly short game, so even if your team does get wiped out, you won’t be sitting around waiting for too long.

If there is an area where Snowblind could use a bump it would be in the player interaction department. Other than taking a die you know your opponent wants, there really isn’t any way to interact with them during the game. Players are each on their own, separate race tracks, so you can’t even jump into one of their spaces and steal food. You march up and down your own track, mostly oblivious of the other team.

Overall I enjoyed Snowblind and thought it work really well as a thematic, press-your-luck racing game. I liked the dice pool action mechanic and really did have to weigh some heavy choices of either playing it safe or pushing forward to get back in the lead.

As long as you are aware of how brutal Snowblind can be with its dice rolls, I think you can have a lot of fun with Snowblind. It’s really easy to learn, with the rules only being about 4 pages long. I think Snowblind can definitely be enjoyed by gamers and non-gamers alike.

If you enjoy either push-your-luck games or dice games in general, then Snowblind is worth checking out. It feels pretty unique and I enjoyed how the deadly nature of the dice matched up well with the theme. Check this one out today.

If you’d like to pick up a copy of Snowblind: Race for the Pole, you can get it for about $45.

Final Score: 3.5 Stars – A really solid push-your-luck dice game that makes no apologies for how brutal its dice rolls can be.