We review Sleeping Gods, an open-world exploration and storytelling game published by Red Raven Games. In Sleeping Gods, players control the stranded crew of the Manticore as they try and find a way home. 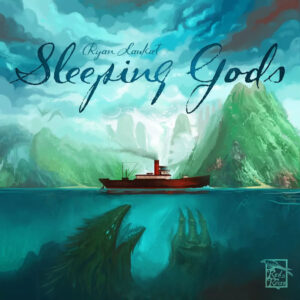 Ever been traveling the open seas on your ship, gazing at the stars, feeling the salty breeze against your face, just longing for home? Ever blink and then wonder why the sky’s hue has suddenly changed, why the ocean’s scent is new and strange, why the stars seemed all out of order… Wait, the stars look very different today. What’s going on here?

Enter Sleeping Gods, the newest narrative game from designer/artist Ryan Laukat and Red Raven Games. In each one- to four-player campaign, players take on the role of Captain Sofi Odessa and her crew of misfits aboard a ship named the Manticore. Lost in a strange new world upon the Wandering Sea, players must explore the unfamiliar new lands in an attempt to find a way home.

Do you have what it takes to survive a campaign filled with misadventures while seeking the totems of the gods? A thematic exploration awaits those willing to brave the open water.

A single campaign of Sleeping Gods is comprised of three rounds, each featuring eighteen events, which lead to at least one of thirteen endings. Initially, a Quick Start guide walks you through the first steps of the game before dropping you into the world. The active player will always take on the role of Captain Sofi Odessa and players will split the remaining eight crew members between themselves. Each crew member has specific abilities and story beats.

The map of the world is presented via an atlas, which is contained in a spiral-bound book that unfolds onto new lands with each turn of the page. Players are free to travel where they wish but will soon find themselves following certain pathways as they collect quests and seek powerful rewards.

Each turn consists of the same three steps:

1. Choose a Ship Action – There are six potential action spots available, ranging from the Bridge to the Sick Bay. At these locations, players will gain a number of Command tokens (action boosters) and a bonus, such as health or searching for items.
2. Draw an Event – Each round features eighteen event cards that will increase in difficulty. The current player must resolve the top event card before moving on.
3. Two World Actions – Players choose between the following four options:
a. Travel – Attempt to travel with the ship to new locations. Travel can be hindered by event cards and physical obstructions on the map such as storms.
b. Explore – Choose to explore numbered locations in the ship’s current region. Exploration is the meat of the game and will be discussed further below.
c. Market – When near a market, players can draw cards and purchase items.
d. Port – When near a port, players can repair the ship, heal crew, and spend experience for new abilities.

Similar to Red Raven’s other games (Above and Below, Near and Far), Sleeping Gods tasks players with exploring locations via a storybook. This narrative tome houses all the adventures that can be encountered throughout each campaign. When a player chooses the Explore action, they open the book to the indicated location number and read the story aloud. The storyline often provides multiple options for the next steps and will require players to make difficult decisions to progress.

The story will find players attempting challenges with their crew skill icons, running into combat with strange humans and creatures alike, or stumbling into other dangers and—if lucky—treasures! Each exercise will ask players to draw the top card of the Fate Deck to determine if their crew skill icons, added to the number on the fate card, are equal to or higher than the skill check value. If so, success! If not, damage may be assessed, but in most cases you will still progress. These challenges can be boosted by using a fatigue mechanic as well as benefits from the Adventure cards discovered throughout the land.

The ultimate goal is to win, steal, or discover the hidden totems of the gods in an attempt to find a way home. There are many totems (at least fifty in the base game) to uncover and only a fraction will be located in a single campaign. Sleeping Gods sports a hearty lifespan, encouraging a multitude of campaigns, which are recorded on a Journey Log and an Achievement Sheet. An expansion with added maps and cards (Tides of Ruin) as well as a dungeon expansion (Dungeons) for added exploration is available for added adventure.

For those familiar with the other Red Raven storybook games, the first thing you’ll notice is the advances in storytelling that come with Sleeping Gods. Here the narrative feels fuller, with each location becoming more vividly realized and every new discovery leading to unforeseen consequences. Through nearly three campaigns (over thirty hours of gameplay) we’ve explored a large portion of the atlas book but have still not discovered all the potential questlines or hidden god totems. Combined with the chance at thirteen different endings, this game’s abundant variety all but begs for replay.

While the storytelling is enhanced by an ever-developing crew of characters, each campaign has also sent us in new and unfamiliar directions. Without spoiling too much, there’s a direct connection to the gameplay of open-world role-playing video games, which must have been a major inspiration for the sprawl of Sleeping Gods. Over time players find themselves attempting to discover treasure and gain experience points through exploration, all while spending these to enhance the crew for more difficult challenges. And once a campaign is over, you wipe the board and start fresh, only carrying forward the knowledge of the locations you’ve visited (we recommend heavy notetaking on your Journey Log), as well as unlocked upgrades based on how many totems you were able to discover.

Another highlight in Sleeping Gods is the combat. As in classic RPGs, when storylines lead to combat the game shifts away from exploration and a turn-based battle—complete with offensive skills checks based on enemy defenses—unfolds. However, rather than relegating these encounters to basic skill checks, a large deck of eclectic and often formidable monster cards drives collective combat strategy.

Lined up in a row, each enemy card will feature several hearts and potential debilities or boosts. On a successful hit, players choose how to damage each square of the enemy card until all hearts are covered. Combat allows splash damage to impact neighboring monster cards and triggers synergy symbols that crew members exchange to boost their teammate’s success.

Having an engaging combat mechanic breathes new life into the Red Raven line. It also keeps the flow of the game active, making players work hard to seek out better upgrades for their crew. Advanced abilities and weapons often come from completing quests, which the game doles out left and right, giving players several potential pathways to explore. The quest variety is impressive and while some are simple point A to point B, many quests will lead players to dive deeper and deeper into the mythos of this new land.

Though there are certainly more highs than lows, Sleeping Gods is definitely a table hog. Beyond the basic setup of atlas, ship, crew, decks of cards and resources, each new acquisition (be it Quest or Adventure card) will require more room on the table. As this is a campaign setup, the cards begin to stack up and make for a lot of revisiting throughout play. Whether smaller cards or an assistant app would have helped, we’ll have to imagine, and perhaps one day a fan will create an online quest log that can be easily tracked without using cards.

Another frustrating aspect of the game is the reset that happens after each completed round. After the event deck is depleted and a story event happens, all of the equipped crew member ability cards are discarded. It makes sense that this wipe helps match the crew level to the reset of the next round event deck, but at the same time it is the one rule that runs counter to the idea of progression. A moment where the narrative doesn’t match the mechanic, so to speak. It also makes discovering the best ability cards and equipping the crew repetitive over time, even if it challenges players to find new ways to utilize the available cards.

On a final note, the review copy that I received does require rulebook clarifications and errata updates on cards as well as the storybook. In our second campaign, we discovered a totem that nearly broke the game due to text that needed to be updated. Without digging deeper into the BoardGameGeek forums, we would’ve extended the game considerably without knowing it. Perhaps future printings of the game will correct these areas to give the experience better quality control.

It’s not very often that a new game comes along and holds my attention like Sleeping Gods. The exploration is thrilling and even addictive at times, the combat is meaty enough to not feel tacked on, and the design of repeating campaigns feels refreshing rather than punishing. Plus, Ryan Laukat’s artwork as gorgeous as ever. We’ll surely play through the entirety of the atlas and then move on to the expansion to explore further. Once we’ve returned the crew to home one final time, there may not be much else to do on the Wandering Sea, but there’s always hope for future content.

Final Score: 4 Stars – An epic sandbox narrative that will pull you in and find you at the mercy of a mesmerizing story filled with far more highs than lows.