We review Shobu, a two player abstract strategy board game published by Smirk and Laughter Games. In Shobu, players are trying to be the first player to clear all of an opponent's stones off one of the boards. 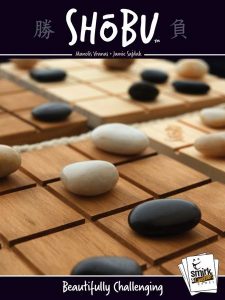 To define what makes a game fall into the “abstract strategy” category is strangely difficult. Ancient classics like Go and Chess are clearly abstracts that have been played throughout history. In today’s modern board gaming environment we often find otherwise abstract games given a glossy coat of theme—Santorini and Hive come immediately to mind.

But today we are taking a look at Shobu. Despite being a brand new design, it looks and feels way more like the ancient classics. Literal rocks on wooden boards where you try to push your opponents pieces.

Shobu is an abstract strategy game for 2 players. It plays in about 20 minutes.

Each game of Shobu takes place on four boards—two light colored and two dark colored. Each player will have four stones on each board and one of each colored board on their side. The objective is to clear all of your opponents stones off of any single board.

To accomplish this, you’ll move two of your stones each turn. Your first move must be on either of the boards on your side and must be passive—that is, cannot push or go through any other stone. You can move your stone in any straight line, including diagonally, up to two spaces.

Then, you must make a corresponding aggressive move on an opposite colored board. That board can either be the other board on your side or the one closer to your opponent. But it must be the same number of spaces and the same direction as your passive move.

This aggressive move may push a single stone as it moves, potentially knocking it off the board. You cannot move more than one stone and you can never push your own stones, so you must plan carefully. As soon as any board has a player’s last stone removed, the game ends and the player with a stone left on all boards is the winner.

You’ll be hard pressed to find a game that is easier to explain. In about two minutes you can teach a new player everything they need to know to play the game. It feels instantly familiar as you position your stones carefully to be able to remove your opponent’s pieces.

But the depth of Shobu is quickly emergent. Frequently, as we were halfway or so through a game, a player would realize that even though they are next to an opponent’s rock, near an edge, they can’t knock it off because they cannot make the corresponding passive move on the other colored board. When the rules are explained, that seems obvious enough, but seeing it happen in action can certainly catch someone off guard. Especially as you can make these situations intentionally as you see the types of passive moves your opponent needs to make.

Shobu’s strength is its reliance on tactical maneuvering. Each move by your opponent has the potential to change everything about the state of the board. While you’ll of course need to think a couple turns ahead, there isn’t a lot of room for long-term planning. You will make frequent shifts from playing defensively to making more attacking moves. Just like any good abstract game, you’ll often find yourself head-in-hands trying to understand the ramifications of every possible move you are considering.

In a single game I’ve went from feeling like I had everything well in hand to being completely out of it…and then back again…more than once. The best moments come when you are on the ropes, down to maybe your last rock on a board. You’ll struggle to find moves that just protect yourself as your opponent continues to chase you around. There are windows that open up to turn from purely defensive to making a more aggressive play and those moves are incredibly rewarding when you find them.

Shobu is a wonderfully produced game that will grab the attention of anyone who happens to walk by. The wooden boards, colored river rocks, and completely superfluous rope to separate your home boards from your opponent make the game look and feel like something designed thousands of years ago.

The gameplay itself lives up to that standard. Shobu has easily jumped near the top of the list of my favorite abstract games. Not of this year, but ever. You can teach anyone to play in less than 5 minutes and immediately jump into an incredibly tense tactical game. I can see Shobu being played for years to come.

Final Score: 5 Stars – An absolute classic of an abstract game.

Hits:
• Easy to teach but lots of emergent tactics and ideas as you play.
• Wonderfully produced game that looks amazing on the table.
• Tough decisions to make and interesting shifts between offensive and defensive movements.