We review Shifting Realms, a game of colliding worlds that will have players racing to complete the objectives of two of the three realms. With lots of different worlds, Shifting Realms attempts to give players a lot of replay value for their dollar. 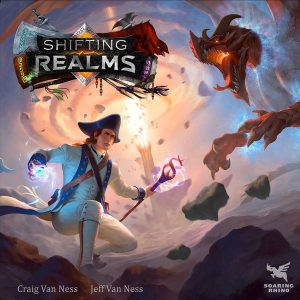 A variable game setup is one thing this reviewer loves. When a game can present diverse challenges from a new setup or new game rules from play to play, it feels like players get free expansions baked into the design. Often the theme needs a little tweaking to make some of this happen, but overall, many of the most beloved games have this variable setup at their core.

So, with a game called Shifting Realms, players should be ready to roll with a variable board setup. More on this to come, but the short version is that the game presents a series of interconnected boards representing different worlds. The boards are invaded by otherworldly beings beyond space and time (the players) who are trying to repair the damage done by shattering a stone keeping the separate realms in harmony.

The plain description is that Shifting Realms is a resource management, action selection game of conflict occurring over three randomly chosen boards, each with certain rules. It’s for 2-4 players and takes 60-120 minutes to play. It definitely has more going for it on the 3-4 player end.

Setup and gameplay are simple. The main twist in setup is that players will choose or randomly select 3 different world boards and place these together on the table. Each world has a watery edge that is lined up with the others. The objective for each player is to fulfill the win condition of 2 out of 3 worlds. The first player to do so wins.

To accomplish this, gameplay is also straightforward. On a turn, a player performs 3 actions. They will then collect resources from structures they control. The actions are mainly focused on moving scouts/workers and/or soldiers then utilizing them to complete tasks. Different actions included:

The only real complexity in the game comes from Combat. Soldiers can attack other soldiers and scouts in their space. Scouts cannot attack, and two scouts are protected from attack by one soldier. When a soldier attacks, it resolves its damage and is destroyed if it attacks another soldier. If it attacked Scouts, it survives.

For those players out there, who have yet to experience games with direct conflict or take-that mechanisms, they will certainly be in for a rude awakening. The game as is can be peaceful, especially in 2 player, but the true way to win is aggression. However, if you combine this expectation with the simplicity of play, Shifting Realms will really throw players a wild arc of a curveball. This results in a game that is rather simple and feels so, but actually presents some interesting options from turn to turn, again, ideally with 3-4 players in mind.

However, complementing the take-that mechanisms is a race to fulfill the various tasks of the 3 realms. It creates a game end condition that feels slightly underwhelming and unintentionally simplistic, rather than the epic arc of a wargame. This could change based on how people play. When a group gangs up on a leader, it serves the overall game narrative, but if every player only mildly interferes with another, the experience is plodding and unengaging.

The third point that really drives home some of the previous comments is about the game’s art. While the individual illustrations are fine, the overall feel of the game is underwhelming compared to other games. The art is more utilitarian, and the theme struggles to blossom with the given components. In a similar fashion, all the board art has a feel akin to a late 1990s PC real-time strategy game. Combine this with the simplistic board layouts and the result is mediocre game presentation.

Shifting Realms isn’t a bad game (unless maybe at 2 players) but it does suffer from some gaffes that could have been avoided. This is definitely a title to look out for if there’s a second edition. The concept is interesting, and the gameplay can be engaging with the right group. Unfortunately, the aesthetics and lack of any complexity given the theme leaves a little bit to be desired. With a more epic scope and feel, this concept could have shined so much better. At the end of the day, Shifting Realms is not bad, but it does need a production manager with a grander sense of table presence and game possibilities.

Final Score: 3 stars – Shifting Realms defeats itself in some ways with a style and implementation that feels underdeveloped. The board design and gameplay lack that special something to really draw players into the conflict.

Misses:
• Bland board and art
• Unenjoyable at 2 players
• Could use some refinement in mechanisms