The king has died and the city of Cardis is in disarray. Four different factions are vying for control of the city and it’s up to each player to seize control. Shadows over the Empire is an area control game for 2-4 players with some great artwork, an interesting theme, and a modular board to help increase its replay value. 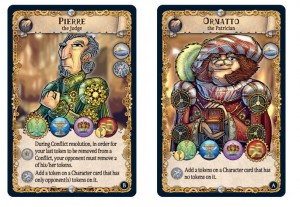 From the Shadows over the Empire page:

In Shadows over the Empire players take the role of leaders of four factions in a struggle for control of Cardis. They must influence various personalities and have them do their bidding. Loyalties are constantly changing and great allies become mortal enemies in a city filled with desire for dominion.
Who will prevail?

While the Kickstarter page has many artwork samples, it’s unfortunately lacking in much information about the game. Backers looking for more detail do have some options to find out more; it just takes a little bit of a time commitment. There are two game play reviews videos on the campaign page, but they both run at least 30 minutes long. You can also download the rule book if you want to take a look at the game mechanics. I wish Artipia Games would have provided more easy-to-access information on their campaign page though, as Shadows over the Empire looks really intriguing. I did spend some time reading the rulebook (only 12 pages long) and the game seems to have some solid mechanics and easy to learn rules.

The campaign has already blown past its funding goal (to the tune of 600%) and is well on its way to unlocking multiple stretch goals. A $32 pledge will get you a copy of the game and any stretch goals unlocked. You have until Thursday, October 10th to become a backer and the game is scheduled to be in hands by November 2013. So head over there today if you’d like to become a backer. 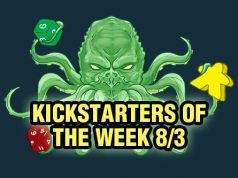 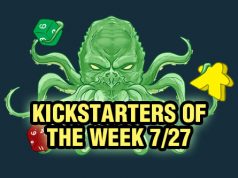 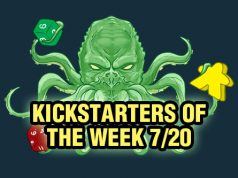 Kickstarters of the Week: 7/20