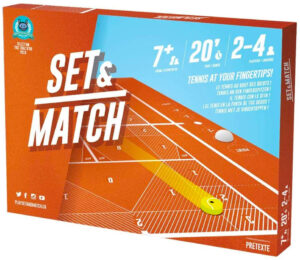 Lace up your sneakers, roll up your ankle-high socks, and slide that headband onto your head because it’s time for a few sets of tennis. Do you have the speed and agility it takes run cross-court and rip that winning backhand? Or the stamina to keep your shots sharp late in the match? What about the nerve to argue with the umpires after every close call.

Wait, you don’t? Well, that’s okay because all you need to play Philippe Latarse’s Set & Match is a strong finger and a table to hold the board. Let’s head out onto the court and see what you (and, more importantly, that finger) are made of.

Set & Match is a dexterity game where two or four players flick a tennis ball piece back and forth on a specialized game board to simulate the ebbs and flows of a tennis match. The ball itself has a felt underside so it glides evenly along the board, which is technically meant to recreate the slower pace of a clay court tennis match (hence the board’s red-orange color).

The playing area is laid out like a standard tennis court except with various zones that are differentiated by point values ranging from 0 to 3. As players flick the ball, they will receive stroke points equal to that number on a track along the edge of the board. This track shows how much control players have during each point, and it will move back and forth like a tug-of-war until one of the players is able to win the point. Points can also be lost in standard tennis ways by flicking the ball off the court or not hitting it past the net.

There are various ways to customize the play experience in Set & Match like adjusted rules, shorter or longer matches, and simplified scoring. (That last one prohibits anyone from announcing “love” as part of the score, however, and that’s way less fun.) The board also includes doubles alleys to add two more players who follow the same rules, but alternate shots with their partners.

For our purposes, the “advanced rules” became standard (because I only associate with high-level finger flicking athletes) and they include bonus stroke points if first serves land in play or if players successfully hit cross-court or drop shots.

As I said, players can pretty much determine any game length they prefer—a single game or set or use the simplified score-tracker to play to 12 points—and the winner of the match receives a silver championship cup to celebrate with (championship cup not included).

I’ll say right up front that Set & Match is instantly fun. It looks inviting on the table and the first time you flick the ball, it’s a satisfying feeling regardless of how successful the shot is. Once an actual match starts, that fun and excitement remain even though there is a small amount of upkeep in between points as you advance (or retreat) the rally score tracker.

From a rules standpoint, the game is also fairly intuitive. Yes, a cursory understanding of the layout of actual tennis will help, but every zone on the board is labeled so it’s clear which spots you should be aiming for. Serving, which is easily the most frustrating part of Set & Match, even includes tiny “ace” zones in the service boxes that will immediately give the server the point.

The best part of the game is that it somehow actually feels like a tennis match. The stroke point concept effectively simulates the pressure one might feel during a real-life rally. If you’re ahead on that tracker during a point, you can take simpler shots and dare your opponent to challenge you. If you’re in danger of losing the point? Well, then it’s time for a dangerous cross-court shot to get you back in contention.

Despite the rules being generally intuitive, Set & Match features one of the most confounding rulebooks I’ve ever seen. On the positive side, it includes an explanation of many edge cases regarding ball positioning and the ways you can tweak the rules. On the negative side? It’s printed as though it’s a warranty booklet for a garbage disposal. Everything is black and white and while there are a few pictures, they all exist as though they’re example figures in a technical manual. It’s the dullest rulebook I’ve ever seen.

Since the game excels at what it’s trying to do, there aren’t many obvious areas that need improvement, but one thing I wish was possible in the standard version of the game was a slightly bigger board. (They do sell two giant edition mats separately that are seemingly the size of Centre Court at Wimbledon, but are also prohibitively expensive.) This would probably lead to longer rallies and the ability to pull off more impressive shots while allowing a little bit more room for error.

Similarly, I wish different court types were readily available for variety. The game comes with a clay court and felted ball to simulate France’s national tournament, but a hard-court variant where the ball travels faster would also be a welcome addition. (One of the aforementioned giant mats is designed to feel like a grass court match, even to the extent that you play with a ball token bereft of its felt underside.) These are minor gripes, but different play conditions would help with the game’s replayability.

As you might have guessed, there isn’t much depth to Set & Match. Flick the ball, set yourself up for success, and avoid the net as much as possible. At the same time, however, there’s the interesting stroke point mechanic that successfully differentiates this from something like Klask.

If you push your opponent into the back of the court or force them to hit a high-value zone it actually feels like you’ve dictated a point just like in a tennis match. And missing an easy shot when you’re ahead in the point is frustrating in a way that doesn’t seem plausible and definitely isn’t rational.

Since players can determine how long they want to play, Set & Match technically can never wear out its welcome, although I found that playing a full set of tennis (which can be as many as five consecutive games) was a bit of a flicking grind. Every point plays differently because of the way shots are hit, but also identically because it’s always about making the best shot you can. Just like in real tennis basically. (Theme!)

Final Score: 4 stars – Set & Match won’t be the showcase piece of your game night (at least not without the extra-fancy, extra-expensive, extra-sold-separately mats), but it will provide an exciting detour from heavier fare.

Hits:
• Feels like an actual tennis match
• Stroke point system is clever and intuitive
• Good components
• Variable rules allow you to cater to the playgroup

Misses:
• Longer matches can get repetitive
• It would be nice to have readily available board variants to help replay value