We review the new card game Sellswords from Level 99 Games. In this quick playing game, 2 players draft a hand of unique character cards and must use them to battle on the gaming table. With easy to learn rules and a unique feel, this one is worth a look. 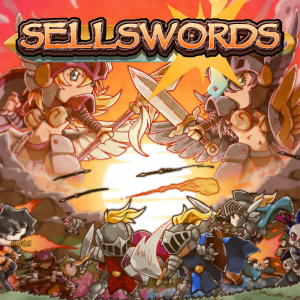 Level 99 Games has made a name for itself with their really creative two player games. From BattleCON to Pixel Tactics, these games all have an intense head-to-head feel that really appeal to players who love conflict. In the past, we’ve reviewed a few of their Pixel Tactics games, which are tons of fun and a game that I’m always willing to play. Today, we are going to spend some time with their newest 2 player card game, Sellswords. Level 99 Games bills  Sellswords as a game where you “Take to the field of battle in [an] intense head-to-head contest of wits and strategy”. Sellswords definitely has a lighter feel than their other 2 players games. The game feels unique, the rules are easy, but is it fun? Let’s find out!

Sellswords is a 2 player drafting and tile placement game that takes about 15-20 minutes to play.

Sellswords is a tile-placement game (although they are actually cards) where each player is trying to end the game with the most troops on the field. After drafting your team of characters, each turn you’ll be placing cards onto the field of battle, using their special powers and hopefully stealing troops from your enemy. At the end of each round, a scoring phase happens where you earn points based on where your troops are in the field of play. At the end of the second scoring phase, whoever has the most points wins.

The components that come with Sellswords are about on par with what I’ve come to expect from Level 99 Games. I rarely have complaints with the quality of their products and this one is no different.

The box is really small and literally fits in your pock (assuming you’re not wearing skinny jeans or something). Included is a deck of square cards with 50 character cards (dual sided) and 4 terrain cards. Each character has a name, special power, and a strength number on each side of the card. Each character is also illustrated in a style that should be familiar to anyone that’s played a Level 99 game before. I always enjoy the artwork on their games and am glad they seem to make good art a priority.

The rulebook is a two-sided, folded sheet of paper that explains the game really well. The front side has rules and game play examples while the back explains every characters power in further detail. I have to give props to Level 99 for doing a good job with the rules as we found it both useful and easy to learn from. My only issue is getting it back in the box. It reminded me of my days as a child when my father would give me a paper map (remember those?) to fold up and put away. I’m fairly certain those map makers are burning in a special place in hell right now for the torture they put us through.

To start the game, choose a terrain tile and deal 12 character cards to the table. Both players then take turns drafting characters into their hand. Once you each have 6, you’re ready to begin.

The game is played over 2 rounds with each player having 6 turns in a round. A turn is broken out into three steps:

1. Play a tile: Play a card from your hand onto the table next to an existing card (orthogonal placement only). You can rotate the card to have any facing you want. The only rule is that once 5 cards have been played into a line, no cards can be played past that. Essentially, at the end of the game there will be a 5×5 grid of cards.

2. Use special abilities: Every card has special abilities, some optional, some mandatory. There are four different types of abilities: Optional, Mandatory, Continuous and End of Round. The abilities range from moving tiles around the grid, to rotating tiles, to flipping enemy tiles, to scoring bonus points. All in all, there are 50 different powers in the game.

3. Compare Numbers: Each character has 4 numbers on their card (one per side). When you place a card, you compare its numbers to all tiles adjacent to it. If your played card has a higher number than your opponents card, you flip their card over, making it part of your army now. However, there are no chain reactions, so if you flip an opponent’s card, you don’t continue to compare numbers.

Once all 12 cards have been played, the round ends and a scoring phase beings. Each player checks how many cards they have in each row (going both directions) and score points based on a chart in the rulebook (from 0-7 points). After that, a second round begins with another drafting phase. The player with the most points at the end of the second scoring phase wins.

I am a big fan of the Pixel Tactics series; it provides a great two player, head-to-head card game with a lot depth and strategy. But one of the drawbacks about it though is that it can be quite intimidate for new players because of the myriad of options available each turn. Its game play length also made it more than just a casual pickup game, despite its small size.

However with Sellswords, I think Level 99 Games has finally created a game that is both fully accessible to newbies, yet also plays quickly enough to fall into that filler role. As a filler game, I think Sellswords excels. More than once I’ve grabbed this game when the first player shows up to a game night and we have 15 minutes to kill. The rules in Sellswords take only minutes to explain to we can quickly get in a game before others begin to shows up.

Looking at the game play, I think Level 99 did some really clever things here. The first that comes to mind is the card drafting. The first time we played Sellswords we skipped the drafting step and just randomly dealt out 6 cards to each player. Since we didn’t really know what we were doing, we didn’t want to spend time over-analyzing cards we wouldn’t understand. While the game works perfectly fine with this route, I’d encourage you to not do this other than your very first play of the game (and even then only if you really just want to jump right in).

The drafting phase is a critical (and fun) element of Sellswords. Without it, the game could quickly get unbalanced as some cards can be a lot more powerful than others. All are great in the right situations, but when you are drafting, you not only can make sure you get some of the cards you want, but also know what your opponent has in his hand. This adds a good layer of strategy to what is a really tactical game. It also provides you with some hard choices at the start of the game, such as “do I want the guy that provides end of round points in my hand or should I just try and flip him after my opponent plays him”.

One area where Sellswords different from Pixel Tactics is that this is really a tactical game, rather than strategic. The game state will change so much from turn to turn that it’s fairly hard to plan ahead. From what characters are on the grid to which are even yours, you’ll be doing a lot of reacting on your turn. You have to assess the current state of the game and try and figure the optimal card to play and where. If that sounds fun to you, then you will love Sellswords.

The many questions running through your head is a big part of Sellswords. This is a game about outthinking your opponent. Where you play your cards can have a big impact on the game and since you are only playing six each round, placement can be critical. Maximizing the usefulness of your character’s ability is important, but so are the numbers on the sides of the cards. Leaving yourself too exposed with low numbers can have some pretty rough results when your opponent gets to go. There is almost a game of cat and mouse being played here as you and your opponent will constantly be trying to one up each other. I’ve had games where we’ve flipped the same card multiple times in succession.

I think Sellswords has a lot of staying power because each game feels just a little different. There are 50 character cards included and you only ever use 24 of them during a game. The variety of special powers is pretty fantastic and each one feels fairly unique. To go with that, the game also comes with 4 different terrain cards, each of which has a special effect on the way the game is played. For example, while the default terrain card has no effect on the game, the Niflheim terrain card causes chain reaction flipping.

I honestly don’t have a ton of negative things to say about Sellswords. Sometimes the powers aren’t completely clear on how they work and requires a trip to the rulebook (or on rarer cases, the internet) to figure out. But overall, I like the diverse characters, the easy to learn rules, and the quick playing time.

Sellswords, while probably not in the realm of gateway game, is easy enough to be learned by most anybody. The rules are intuitive and it’s really a different play experience than most other games out there. As a filler game, Sellswords probably rises near the top of the pile in the unique play it offers, the ability to jump right in the game, and its portability. If you are looking for a competitive game that’s both highly tactical and really unique, then give Sellswords a look.

If you’d like to try it out yourself, you can pick up a copy for about $20

Final Score: 4 Stars – A great filler game that both portable and a lot of fun to play. This one will have a home on my gaming shelf for a long time.

Misses:
• Some powers could be clearer
• No rounded corners on cards 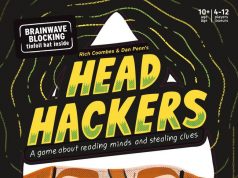