We review Scythe, the economic and area control board game published by Stonemaier Games. In Scythe, players are trying to earn the most coin over the course of the game. 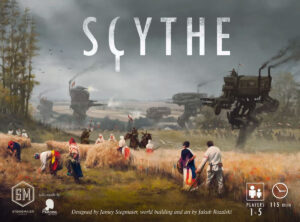 Welcome to alternate-history, 1920s Eastern Europa. We’re glad you enlisted. Our faction is currently being led by a military intelligence officer who has lost the love of her life. You’ll often see her out in the fields with her Siberian tiger (yes, you should keep your distance) as she scouts for ways to push our nation westward toward that mysterious factory you see on the horizon. What’s that? Oh, that metallic sound? That’s our combat and transport convoy powering up to take you (along with those other workers over there) out into the field to exploit some resources. The harder you work, Comrade, the more fame and fortune for us all.

Over mountain, farm, forest, and tundra, let’s harvest the land of Scythe, the 2015 economic/area control/combat classic from Stonemaier Games. Strap on your boots, pick up your tools, and hitch a ride on the nearest mech. It’s time to place some stars.

In Scythe, players select one of five factions vying to infiltrate and maximize as many territories as possible. The chosen faction will come with a separate player mat that provides action options for each turn. Each player will have the same action options available; however, as each mat is unique, the cost and benefit of each action will vary. This combination of faction and player mat offers a first look at how each player can design their initial plan of attack. It also dictates the faction’s starting power, popularity, coin, and combat cards.

The Scythe game board is composed of territory hexes. Each hex has a primary terrain type that will produce specific resources. There’s also lake terrain that can only be accessed by certain factions, as well as a central factory that provides an incentive for those who can both control the hex during play, as well as at the end of the game. Each faction’s unique character figure starts at a designated home base and two of their eight total workers are placed on adjacent hexes.

During a turn, players will choose one of four action areas on their player mat to activate. Each action area of the player mat will have a top-row action and a bottom-row action, both of which are optional to perform.

The top-row actions include:

The bottom-row actions include:

Of the bottom-row actions, the deploy action opens a whole new way to play your faction. As each mech is deployed, they unlock special powers unique to your faction. For example, at the start of the game, most factions are confined to their starting area and are unable to cross rivers. Unlocking one mech ability allows plastic units to Riverwalk to certain terrain types, opening greater access to the board. Additionally, mechs have the ability to carry workers from one space to another.

Whenever a plastic unit enters a space occupied by another unit, the moving unit must stop and either scare away an unprotected worker (losing popularity) or combat another plastic unit. Combat finds the two factions secretly choosing how much combat power to use as well as optionally adding a combat card for every plastic unit in the fight. Both factions reveal their totals and the highest number wins. Losing units are returned to their home base and relinquish control of the territory to the winning faction.

The goal in Scythe is to have the most fortune at the end of the game. But the game will end when one faction has placed their sixth and final star on an achievement section of the board, with some end-game scoring opportunities to earn extra coin.

I passed hard on Scythe back when it first emerged from its alternate-history, 1920s slumber. Beyond the supremely gorgeous artwork (by Jakub Rozalski), all of the predominate elements (higher player count, area control, mech combat) didn’t work for my group at the time. Thankfully, the opportunity to delve into this game that (when writing this review) sits at #14 overall on BGG’s top games list has given me a chance to see what all the fuss is about.

For the most part, Scythe feels like a mishmash of ideas that somehow become a cohesive whole. The backstory of the land, the main characters with their animals, the mysterious factory, the roaming mechs—everything reads as a narrative adventure awaiting exploration. But once you sit down to a game and read that the goal is to get the most money, you realize that beyond a fresh coat of paint and some choice mechanisms, you’re in for a typical economic efficiency simulation.

It’s truly the artwork that seems to have hooked and inspired a generation of gamers. This thematic depth, coupled with the quality miniatures and the double-layered player mats, makes Scythe an early example of upping the component game. You really feel like you’re entering a whole new world when you open the box for the first time.

I expected Scythe to play best at a higher player count, but I’ve found that the three- to four- player games can be satisfying. While two-player is a little too loose and doesn’t provide enough tension, the solo automa is a wonderful opponent if you can get your head around the way the bot teleports across the board. I haven’t played two-player yet with the automa included, but I can imagine it will make that space feel livelier and more contentious.

Scythe presents as a combat game, but it’s rare to find a hefty amount of combat during a session. There is a single faction that benefits from constant combat, but typically factions are trying hard to build their engine and maintain territory control while slowly and methodically expanding. The player mat puzzle of which resource to produce to improve upon the next action doesn’t get old, but there is certainly room for Scythe veterans to have a better handle on how to proceed over newer players. It really is just a brainteaser that requires certain steps to maximize efficiency. Unless another faction is getting in the way, seasoned players can work out the quickest way to get stars on the board at an early stage.

One of the bright spots is how faction and home base balance are presented. We’ve not yet had a game where a specific faction has felt too overpowered based on an associated player mat, and the choice of which starting territory terrains are next to each faction’s home base feels intentional (Note: We did obey the banned combinations from the Stonemaier FAQ.) The thought that went into these starting five factions and their potential combinations makes each game a fun riddle to tackle.

Back to theme, Scythe uses an encounter card system to try and inject some life into the world-at-large, giving players a chance to read a slice-of-life moment for their faction’s units. At first, these were fun to read (and again the artwork is evocative), but over time these encounter cards lost their thematic luster and became superfluous. There is one faction that benefits from the encounter cards, but beyond that, they add a bit of luck in a game that doesn’t have much luck in the mix. Their inclusion is a mixed bag—it first highlights and then diminishes the game’s theme.

Ultimately, it’s apparent why Scythe has developed a large fan culture, complete with faction tier lists and tournament challenges. However, Scythe’s impressive table presence didn’t do enough to engage our group. We see the drive to maximize each faction and supporting player mat getting stale over time with only the base game. The fact that the mainboard features factions that are not included in the game (See expansion: Invaders from Afar) also makes it feel incomplete. That said, it was always ripe for expansion content. Maybe one day we’ll get the itch to check out the Rise of Fenris campaign to see if it shifts any gears.

Scythe was a Stonemaier Games darling from day one. What it brought to the table raised the bar for many publishers and challenged them to give thought to quality beyond mechanisms. It also highlighted a release model that provided a teaser for future expansion content, as well as a way to revise content to appeal to a larger fanbase. While the gameplay in Scythe isn’t as innovative now as it may have been then, there’s enough in the base box to keep gamers engaged in a tight efficiency and area control dance. An initial taste will help players decide if they want to pursue additional content to see if it improves play at their preferred player count.

Final Score: 3 Stars – Get your tetanus shot, fire up your rusty mechs, and enjoy the alternate reality vista from an old, yet familiar, platform.

Misses:
• Theme doesn’t carry through all the way
• Encounter cards are lackluster
• New players will suffer against seasoned vets