We review Schotten Totten, a 2 player only card game published by IELLO Games. In Schotten Totten, players are playing sets of cards onto their side of the wall in the hopes of taking control. 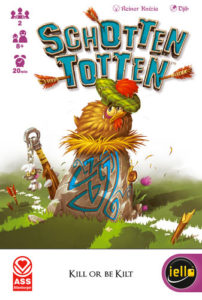 The title for Schotten Totten has a bit of a story to it. The word Schotten means “Scots” or Scottish people in German. Totten apparently comes from another phrase in German using the word Hottentotten, a derogatory term for a certain tribe in Africa. It basically means that the customs of these people, misunderstood by Europeans, delivers bedlam or chaos. Despite the awkward usage, as a game title, it fits.

In Schotten Totten, players act as two clans of Scots on each side of a border of stones. Over the course of the game, players build up forces on either side as sets of three cards with the objective of claiming stones by having a higher valued set than their opponent’s three cards.

After setting up the row of border stones, players draw a hand of cards. With each turn, a player lays a card as part of a set next to each border stone and draws a replacement. The goal is to have the higher valued set of cards on their side of the stone. Set value is revealed by a reference card and compared poker style. For example, a colored run of cards beats three of a kind and three of a kind beats a flush.

Since every color and number combination is a unique card, players can eventually surmise who will have the better set on a side of the border stone. Once determined, a player who wins the stone moves it closer to them. Once a player obtains three adjacent stones or five stones total, they win.

For advanced play, a series of “Tactics” cards also add special actions to play. They include abilities such as moving a card or cards that act as a variety of “wild” cards.

Often gamers are looking for small games that travel well. Schotten Totten fits this definition exactly. Its size and depth are what drive the positive impression it leaves.

The first thing that players will likely notice is that the odds of drawing just the right card to complete a set is on the forefront of their minds the whole game. Place a set down too early and players will give their opponent more information about how to beat the set. Players who spread cards out might be forced to dump a card to a set just to get another draw. The balance of these actions and how to read the field of available cards is extremely engaging.

As play continues, maximizing strategy to deny an opponent cards also becomes clear. As players see the sets developing on the other side of the border, the needs of their own sets and which information to hold back from an opponent (because of certain cards in hand) also comes to mind. The psychological nature of play is wonderful to see, specifically because of the unique cards.

If that weren’t enough, it’s an extremely easy game to carry and get to the table. Filling up time and space in a bag with a game containing this level of interaction and strategy is a no-brainer.

Where it might get unwelcome looks is from opponents who have played it repeatedly. One or two games a session is enough to keep it interesting, but any more frequent, and it begins to feel old.

Schotten Totten is another game that every gamer should keep in their game bag. Despite feeling repetitive with serial plays, it keeps high engagement as a filler. Couples will also find it a welcome opener on gamer date night.

If you’d like to pick up a copy of Schotten Totten, you can get it for about $15.

Final Score: 4 Stars – With fast gameplay and lots of card strategy, it doesn’t get old quickly. With the Tactics cards, the variables open up wildly with game time being the price to pay.

Misses:
• Stale with the same opponent