We review Sabotage, a hidden movement game published by Fowers Games. In Sabotage, players are split into two teams, with the villains trying to activate the doomsday machine while the spies try to stop them. 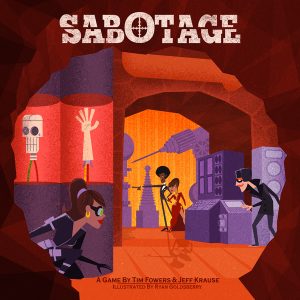 In the midst of the vast hobby of board gaming, one of the genres/mechanics that sees a limited number of releases is the hidden movement genre. Starting with Scotland Yard in 1983, hidden movement games are ones where a player shield hides the moves one or more players takes about a playing field that is shared by all. Last year, well-known designer Tim Fowers took a swing at this small genre in a not-so-small way. Compared to his other games, the box for Sabotage could house almost every other design Fowers Games has published.

Sabotage aligns more with Captain Sonar instead of Whitehall Mystery, where one giant screen separates the two teams. One team, the spies, must hack the doomsday machines seven times to score a victory. The other team, the villains, must hit four successful attacks to be victorious. The game is either a two or four player game and finishes in about an hour.

Rounds in Sabotage follow four steps: roll dice, plan actions, execute actions, and clean up. Each turn begins with one player rolling their four dice and all other players set their dice to the same numbers, so no one sits with an advantage. Then everyone simultaneously takes those dice and pairs them with an action tile that meets the requirements. Some tiles need a number within a range. Some need some dice that equal a sum. Others require a pair of the same number.

All players are doing this until they agree that they’re ready. Then, beginning with one of the villains, they complete each of their actions starting with the leftmost on their player board and moving right. The tiles also have a speech bubble that players must say out loud for their opponents to hear. Some actions do not require it, but some have a word in quotes or parentheses. If in parentheses, the actual name of the action is required. If it’s inside quotes, you say what is in the quotes, even if the action tile isn’t exactly what is in quotes.

The second villain takes their turn, and then once finished both spies do their turns in the same way. Many of these actions are all about moving around the grid, scanning the area for opposing players and cubes in generators, hacking villain devices, or attacking a nosey spy. All the actions are to further the win conditions for the two sides. The spies must hack eight Doomsday Machines to be victorious, while the villains must make five successful attacks on the enemy to win Sabotage.

Sabotage fits into the hidden movement genre in a different way compared to most of the others. It uses a unique action system that is a mix of programmable actions and rolling dice almost like you’d see in a roll-and-write. Compared to the majority that have large maps, and many places to hide, the map in Sabotage is a 4×4 grid differentiated by colored sectors and letters (or names that match the letters on the opposite side of the board) for rooms. This is a close-quarters game where seeing the opposition is quite frequent.

That’s not to say there aren’t opportunities for bluffing. When a spy scans, they can ask for information in a row, column, or sector they are in. This is usually a question they ask after using the ‘move and scan’ action tile. But once a spy unlocks the ‘thermo’ tile, they scan in the same manner, but without moving, and in ANY row, column, or sector, combined with the fact that there is no difference in what they tell the villains they are doing. Not only is it an opportunity to gain info, but also throws the villains off their scent.

The game is asymmetric in terms of goals, but both sides must capitalize on their clever bluffing, the information they gather, and opportunities to land a shot or hack a doomsday machine. Use of actions that don’t require telling the opponent information is key. If done correctly and balanced, the other side will have a difficult time determining if you’re spending dice to unlock new abilities, using them all to move, or loading up one action tile with multiple dice to plant a virus that will hack a room every round after this round. The sides really feel balanced due to the harder-to-score “hitting a spy” only needs five as opposed to the eight total hacks.

The components, while really nice, are a mix bag for me. Fowers Games opted to go with the Game Trayz approach, which I honestly didn’t think was necessary because the box can become one of the biggest on a shelf. The contents of the box doesn’t warrant the need of the trays either. Yes, it is convenient to hand each side their own tray with their minis, wooden sticks, tiles, and tokens. But the same could have been done with plastic baggies and trays that keep the minis safe. Fowers Games also chose to use the box as a shield as opposed to including one in the box like Captain Sonar, which sounds like good idea on paper. But because of the thickness of the box, it is a table hog. Plus, because it folds open instead of having a lid, it is more prone to acquiring damage, and even comes with stickers to cover the peeling flaps.

On the bright side, the box/shield gives regular artist Ryan Goldsberry a huge canvas to show his work. It has four large pictures that pair one spy and one villain in a hideout, which gives all eight characters tad more personality. The board with the named rooms also features quirky art, but doesn’t hold the same weight as the shield. Unfortunately, the action tiles are limited to just the outlines of the characters. In addition, the tiles give concise descriptions of what the action tiles do instead of giving an itemized glossary of all the tiles. Choosing to have minimal art and minimal wording is the worst of both worlds.

Sabotage does quite a few things right. The bluffing, action programming, and win conditions all mix to create some tense moments or hilarity when making an untraceable hack or attacking from across the board with a land shark. The art (as expected from Fowers Games) is great, and the production is generally good, if not over-the-top. But compared to other hidden movement games we’ve seen, it doesn’t produce moments where players are quivering before they’re found. If I were to assemble all six prior releases from Fowers Games, I think I could find a way to fit them all in the box for Sabotage. But even with the big box, Sabotage’s gameplay doesn’t match the size and feels more in line with the other releases from the publisher.

Final Score: 3.5 Stars – Sabotage is a fun game with plenty of variability, but the gameplay doesn’t perfectly match the size and production.

Misses:
• Action tiles lack clear explanation on tiles themself or from a full glossary
• Oversized due to Game Trayz and using the box as a shield
• The game’s feel doesn’t match the size of the production

Edit 5/20/20: Fowers Games says they are working on a complete rulebook rewrite with an index for all tiles. It will be available online as a PDF, and they will be sending out printed versions as well.