We review the second edition of Robinson Crusoe: Adventures on the Cursed Island, published by Portal Games. This cooperative game will have players working together to survive on a deserted island. 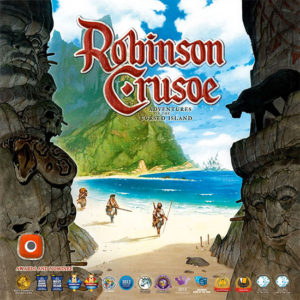 Back in 2012, there was a game that caught my eye called Robinson Crusoe: Adventures on the Cursed Island. I acquired a copy and eagerly brought it to the table. However I quickly realized that it was plagued by a confusing and obtuse rulebook. Sadly, this game didn’t make it to the table often, and when it did, I was never sure if I was even playing it right.

Fast forward to 2016 and publisher Portal Games smartly decides to update the game with a 2nd edition. Promising a clear rulebook and upgrade components to go along with its deep gameplay, many fans were eager to try out this second edition.

Robinson Crusoe: Adventures on the Cursed Island (here on knowing simply as Robinson Crusoe) is a cooperative survival game for 1-4 players that takes about 60-120 minutes to play. Robinson Crusoe plays well at any player count.

This second edition of Robinson Crusoe’s rulebook was overhauled by Gaming Rule’s Paul Grogan. He went through years of rules questions to compile a 40 page rulebook that should guide players through the gameplay. I’ll be giving you a brief overview of how the game is played here, but I’d recommend downloading a PDF of the rules should you want the full details.

While Robinson Crusoe comes with 8 different scenarios, each of which have their own special rules and win condition, the core of the gameplay flows much the same.

Each round begins with an event phase, morale phase, and production phase. These work pretty much how you’d expect: Drawing event cards, gaining/losing morale, and gaining resources. Event cards are dual in nature and will have an immediate and future impact.

The action phase is where you will spend most of your time. Each player can take up to two actions. These range from exploring, building, gathering, hunting, and other minor actions, such as resting or cleaning the campsite (with the first three being the one you’ll probably do the most). In most cases, sending one player token will require a roll three dice to succeed, while sending two pawns will be an automatic success with no roll required.

Each of the three dice are used to determine a different part of the outcome of your task. One will determine if you succeed, one will show if you are injured in the attempt, and the last will decide if you have an adventure. Adventures require you to draw a card and resolve the text. Many of them are bad, ether immediately or in the future (they are shuffled into the event deck).

The Round ends with a Weather and Night phase. This is where you need to have a solid shelter and stockpile of resources as the weather dice can be pretty brutal. Rain clouds can quickly chew through your food and wood supply if you are not prepared. Night also requires players to eat food or take health loss.

Rounds will continue in this manner until the scenario goal is accomplished, or a player takes too many wounds and dies.

Despite my quick overview above, I do want to say that Robinson Crusoe is a deep game with lots of moving parts. There are quite a few systems at work in the game, and I’d recommend trying out at least a partial solo game to get a feel for everything before you bring this one to a game night. The game definitely flows better after you get a few rounds under your belt.

And once you do, Robinson Crusoe can give you with a really thematic experience. There are piles of cards with narrative elements to encounter that will really punch home the feeling that you are trying to survive on a deserted island. This, for me, is also a bit of a catch 22 with the adventure cards. I love drawing them because of their narrative elements and how they really deepen the story of the game. But they also will usually punch you in the gut somehow, so I also hate drawing them.

This brings me to something that you will either appreciate or hate about Robinson Crusoe. It’s a difficult game to win. Expect to lose, sometimes brutally in this game. While the loses never really feel cheap, occasionally bad dice rolls will sink you and that can be frustrating. The weather dice in particular can be particularly devastating. You might think you have your next round optimized and one bad roll and destroy all your well laid plans. I’m frankly torn between loving the challenge and hating to see my strategy thrown into the bin due to a bad roll.

One area where I think Robinson Crusoe is extremely successfully is the flow of the game. You start out with almost nothing, just an island tile, a few resources, and some ideas. Yet as the game grows, so do your group of castaways. You explore the island, find discovery tokens to aid you, craft inventions, shelter and weapons to make you the king of survival on the island. Sure, the island is fighting back at every turn, but there is something just so satisfying about the player growth experienced during the game. Every round you feel like you are getting better, stronger, and more in control of your destiny. It’s those moments that really make Robinson Crusoe a special game.

Finally, I should point out Robinson Crusoe’s solid replay value. The 8 scenarios in the box really play very differently. Each has their own goals, special rules, and thematic elements. There are 30 cards in each of the adventure decks and you will only see a handful of those cards in total during a game. This gives Robinson Crusoe a lot of legs, especially if you are the type of person that won’t quit until you’ve beaten a scenario.

Overall I really enjoy Robinson Crusoe, despite losing a good amount of time. It also works really well as a solo game, if you are into that sort of thing. The only thing that’s should give players hesitation about picking this one up is if you can deal with the luck element in the game. You can make some exceptional plans, but a bad die roll or card draw can sometimes have a devastating impact. If you are OK with that, then Robinson Crusoe will definitely delver on a great, thematic experience that will keep you running around the island for many game sessions.

Misses:
• Can sometimes be to prone to swings of luck
• Needs a learning game to really get the feel for it