Save the sinking ship! Red November

is cooperative board game in which you and your crew of hardy gnomes trying to save your floundering submarine. As usual in a coop game, if you and your friends vs the game. The game, in this case, is a submarine that keeps flooding, getting set on fire and having equipment failures. So, how hard is it to save this doomed vessel? Pretty damn hard actually.

, you each control a gnome on the submarine. Each turn you will be taking actions to try and save your ship. This is mostly accomplished by going to the hazard area and trying to fix the problem. How do you fix it? Usually it requires an item, a die roll and quite a bit of luck.
The game has a unique time track. The track goes around the board and tracks how long your specific gnome is doing an action. The longer you take to do an action, the better chance you have of succeeding. That’s the basics of Red November.
During most everyones turn, the sub will continue to break down. If the sub takes enough damage, it sinks and you all lose. Hold out long enough for your rescue boat to arrive and you are all winners! 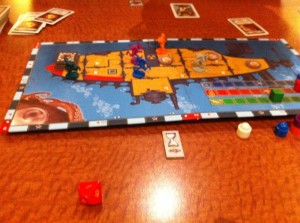 I’ve already gone over the basics of Red November. But to go a little more in-depth, start with a submarine with a number of rooms on it. Some are just hallways while others are quite important (missile command, item retrieval, etc…). Also on the board are  tracks to measure the subs conditions for Asphyxiation, Heat and Pressure. During the game, these conditions get worse, and if anyone of them reaches its maximum value, the submarine is sinks and all the players lose.
During a players turn, they can move to a new location and perform an actions there. Some actions include: repairing the sub (fixing malfunctions, putting out fires), fixing obstructions (floods, blocked doors), or stocking up on equipment (they help you do the above).
To accomplish each of those actions, you have to spend time. The more time you spend, the greater your chances of success.  To complete a task you take the number of minutes in time you are spending doing the action, plus any bonus from items, to get your target number. You then roll a 10 sided die. If you get lower than that number, you succeed.
However, the more time you take on your turn, the more events will happen around the sub. As your marker moves along the time track, bad (more emergencies) and good things (free booze) will happen to the sub.
Keep the sub running long enough for rescue to arrive and you have won!

We had a lot of bad luck in Red November. You draw disasters from a stack and we happened to pull a lot of bad ones repeatedly. That, and our rolling was pretty poor. We quickly had to start spending a lot of time accomplishing tasks, which meant the timer was flying around the track. Damage kept piling up faster than we could repair it and alas, our sub was lost.
I don’t think we even made it halfway around the time track before the sub sank. Our poor gnomes never really stood a chance.
This is kind of a short session review, but to be honest, not a whole lot happened to report. The turns were fairly standard, with not much worth reporting. Plus the shortness of our failure didn’t add anything extra to tell. 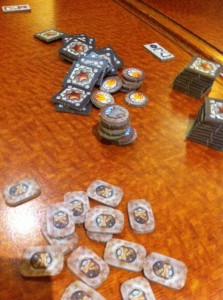 So I’m usually a big fan of cooperative board games. I like working with a group towards a common goal. Also why I love playing craps in the casino. Not only do you get to roll dice, but all the players are on the same team. One guy wins, everyone wins! (except those jerks betting the ‘don’t pass line’. Don’t be one of those jerks).
But I digress. This was my second time playing Red November, and while I love the theme, I really don’t like this game that much. I have a couple of issues with it.
First, the components aren’t the best. The board for the submarine feels really small. Everything is cramped together and the time track around the board makes it easy to knock the markers around (which is a big no-no).
But more importantly, I really am not a big fan of the time track in general. I feel like it just produces too much down time. If it’s my turn and I need to stop a big problem, I’m going to spend a lot of time doing it to make sure it happens. However, that will delay met way ahead, meaning other players could be having 2 or more turns before I get to go again. While, logically, it makes sense. It’s just not very much fun to sit there and wait for your turn. Neat idea, in concept, but in play, it just falls flat for me.
Lastly, the game gets repetitive fairly quickly. In lots of coop games, the rules aren’t too deep, but in Red November

, I feel like I’m just moving to the most troublesome spot and making a die roll. Repeat every time my turn comes around. Combine that with the extensive waiting for your turn and it is not a winner in my book.
If you can get past the downtime, small components and repetition, then you may want to give this one a try. However, for a good cooperative game, I feel like there are many better options (Gears of War, Pandemic

to name a few) to spend your game night on.

If you are interested in getting a copy for yourself, it’s about $24

Final Score: 1.5 Stars – Great theme, but small components, too much downtime and repetitive actions fall flat for me.

Hits
• Cooperative gameplay is always a win for me
• Good theme

Misses
• Too much downtime
• Poor components, the board feels really small
• Repetitive gameplay