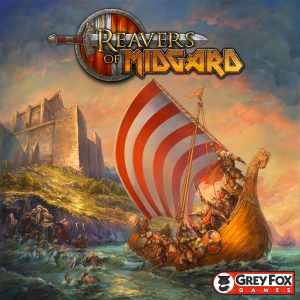 A franchise, once started, has an unspoken obligation to keep up or increase the overall value of the license it’s using. A seminal game that founds a franchise puts a stake in the ground to enshrine its theme and mechanisms as a paragon of what is possible with the right combination. When planning a followup game, considering the synergy of theme and mechanisms from the previous work is a crucial task.

Has Grey Fox games put the time in for this activity? This reviewer aims to find out with a review of their new title Reavers of Midgard (Reavers). It carries the “Midgard” moniker of its forbear, Champions of Midgard, forward to a new mechanism. Where the previous game used the ubiquitous worker placement + dice formula, Reavers switches to a different tack. Reavers utilizes a player action choice with other players following mechanism. This is also a ubiquitous mechanism that has fueled some of the most popular games (Race for the Galaxy, Puerto Rico).

The result is an action selection with dice game for 2-4 players. While BoardGameGeek users seem to think that 4 players works best, this reviewer’s suggestion is for only 2 or 3 players. There’s more to come on why that is, but suffice it to say, the playtime, which is listed at 75-90 minutes, can scale to 2.5 hours which mostly depends on player count.

The overarching mechanism of player turns in Reavers of Midgard is simple, but the different actions and their complexity is where the challenge is. On a turn, the start player chooses one of the six actions available. They will then complete that action and then clockwise around the table each other player can complete the same action if they have the appropriate resources. The actions are as follows with VERY brief summaries of each:

Recruit Reavers – Players can draw Reavers cards which can be invested to boost actions later, discarded to gain resource dice immediately, or use a leader card to change which resource die symbol is wild. 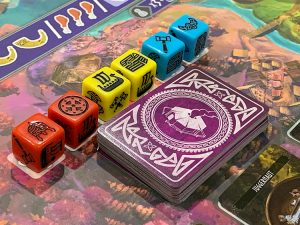 Trade with villages – Here, players can gain some resources, randomized resource dice available in the location, or a Prophecy card which grants points at the end of the game.

Battle at sea – At this location, players will spend food resources and may then battle a creature card. To complete a battle, players will convert certain resource dice to battle dice. The player then rolls the battle dice and must roll a certain number of axe symbols based on the target number in order to succeed and gain a monster card for points.

Raid villages – By spending one food and 2 chest facing resource dice, players can take 2 village spoils cards. These cards have a variety of effects ranging from improving a ship by providing a free die symbol, giving resources, or enabling various end of game points by collecting symbols.

Raid keeps – This is similar to raid villages, but the rewards are slightly better with players required to spend shield facing dice. Keep spoils cards have a set collection mechanism for players to gather cards delivering art, tapestries, and various other resources and tokens.

Subdue territories – As one of the more consistent actions, players can spend resources or do battle to gain the resources on the reverse side of territory tiles. These tiles also earn players victory points (VPs) every round.

A single play around the table completes one player’s turn. But once all players have had a chance to select an action for the round, the round ends. After six rounds, the game is over and VPs are counted. Highest VP total wins. 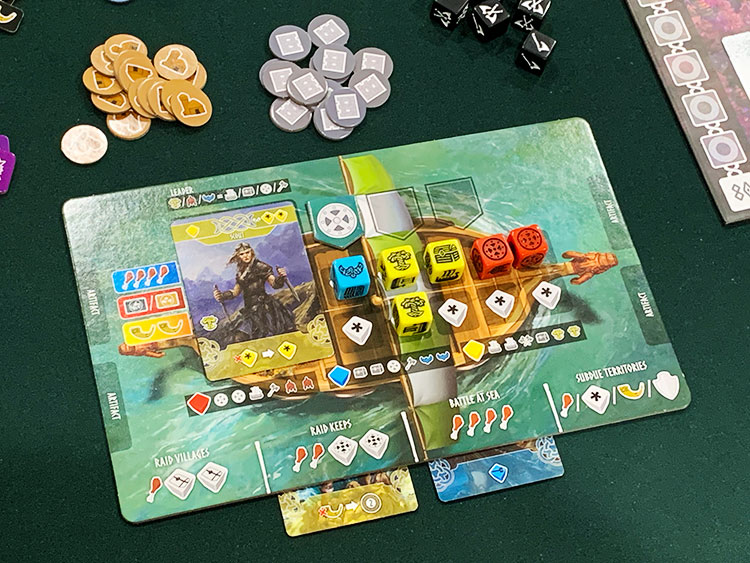 Earlier it was mentioned that the playtime can vary from what is listed on the box. This is not just due to learning the game or extreme analysis paralysis. The main cause is the number and kind of decisions necessary for each action. Even the early game requires a knowledge of how all cards in the various decks work and processing how each card benefits a player is taxing. On top of that, the time it takes a player to complete one follow-up action is equivalent to a normal turn in any other game. If this happens to be the “battle at sea” action, the dice rolling and creature evaluating can be tedious as well. 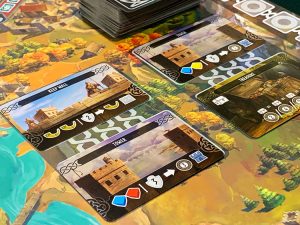 As a result, the game feels a lot more complex and longer than it really is. Players are often waiting for their action selection turn to come around and ambushed in the meantime by the choices they must make on other player’s turns. The various types of dice and their symbols mean the game has quite a few resources to keep track of. Although all of this does not add tremendous difficulty after a couple of games, it means teaching the game is painful.

The other unfortunate aspect of the game is that unlike Champions of Midgard where worker placement activities built up to a journey to do battle across the sea, the action selection and follow mechanism has an entirely different feel. This is an efficiency mechanism where one player’s choosing to do an action at an inopportune time for another player can derail a progression of plans. It means that the battle at sea action, which could be a central focus, loses importance as just another opportunity for points. If players were hoping that Reavers would echo those same heroics as Champions, they are likely to be disappointed. 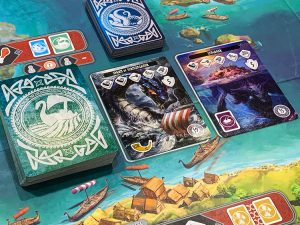 Where Reavers does overcome all these negatives is in the depth of choices and choices in resource conversion to points. The decisions present require some serious contemplation as the risk for different actions provides different outcomes and values. Players would do well to really understand how each action resolves into points before deciding. Here, the tactical and strategic calculations create a game of crunch that matches the delicious flavor of the theme.

Reavers of Midgard is a good game. It keeps up the Champions of Midgard pedigree, but it cripples itself from being great. The complexity of some actions and the time it takes to complete them drags down the experience into a slog of small decisions to an overflow of point counting at game’s end. That feels wrong in a Viking game where combat and glory are meant to rule the day. In reality it’s a resource conversion to tokens and set collection where the efficiency of getting stuff is the important skill. If that’s the kind of Viking players want to be, then Looters, uh… Reavers of Midgard is for them.

Final Score: 3.5 stars – Point salad point generation and unnecessary complexity give a dent to the theme even though Reavers has depth to please any Viking lord.

Hits:
• Crunchy decisions for strategy and tactics
• Lots of options for point generation
• Exquisitely designed board and iconography

Misses:
• Overly complex follow-on actions
• Long gameplay for what it is