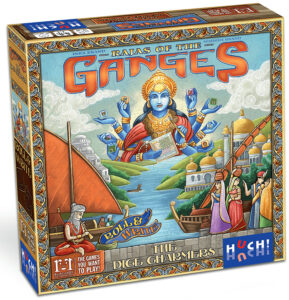 My wife and I were heading down to visit my quietly brilliant 16-year-old niece, so I suggested we play a game. I needed something portable and easy to teach, but also a little more advanced than a typical gateway game because my niece could beat adults at Ticket to Ride when she was eight.

I settled on a roll-and-write from venerable Euro designers Inka and Markus Brand, Rajas of the Ganges: The Dice Charmers. Dice Charmers is based on the Brand’s very good Euro called Rajas of the Ganges, and captures the feel pretty well. Neither my wife nor my niece had played the original, but they were able to get up and running without much trouble and we had a great afternoon rolling dice and marking up our scorepads together.

Rajas of the Ganges: The Dice Charmers is a roll-and-write designed for 2-5 players, takes about 30 minutes to play at low player counts and up to an hour with a full 5, and seems most fun at 2 or 3.

Play is quite simple. Players alternate being the first player who rolls 4 sets of 2 dice, each pair with symbols representing different activities that have been ported over from the Rajas the Ganges world. The first player chooses one die and her choice means the matching die of the same type is temporarily removed from the game and placed on a cardboard elephant, leaving the other six dice for the other players.

The first player gets the benefit of the die she chose, marks it on her score pad, and then the other players choose a die and mark the benefits they get on their pads. The first player marker (indicated by that same elephant) are then passed to the next player.

The dice let you acquire goods, sell goods, get money, get fame, get karma, use the special ability of one of the six Rajas characters who live in the palace, build a road (which can trigger other benefits), or move along the river (which also triggers benefits).

You do all this to generate money or fame, which is the key to winning Dice Charmers. On the left half of your scorepad is a fame track that works its way counter-clockwise, while the money track starts on the right and works clockwise. Everything else in the game is about earning bonuses and generating cool combos. Marking off certain spaces on your scorepad will score you bonuses and those can often earn you enough roadway or money or fame to trigger other bonuses. As in the original Rajas, the game ends when one player gets the money line to overlap the fame line. Players finish the round and then whoever has the largest overlap of money over fame is the winner.

The game essentially becomes an exercise in figuring out whether you want to score points right now or you want to set up a more powerful future combo and execute it next turn for more points. But don’t wait too long to get your point engine going or you may find you just don’t have enough turns left to get your amazing point engine to crank out points before one of your opponents ekes out an overlap and wins before you get rolling.

This is what makes Rajas of the Ganges: The Dice Charmers more than just Yahtzee with pretty dice. There are fun strategic choices about the balance between efficiency and speed, all while also having to worry about whether your opponents are going to outfox you. It makes the game fairly tense for a seemingly innocuous roll-and-write. I found this especially true in the two-player game, where each player chooses twice, so thinking about what the other player will take between your first and second draw (and thus influencing which die you take first) can create some really painful-yet-fun dilemmas.

There are a few fiddly bits that make the rules more complicated than necessary. If I could remove the elephant and its associated die removal entirely, I would, and I’d probably take out the karma rules which feel added solely to match a feature in the original version of Rajas. And there’s a subtle rule about how roads a can be placed that we ultimately ended up ignoring because I wasn’t keen on enforcing it and it played just fine without it.

Theme-wise, it’s pretty, but not really about India at all.

With those exceptions, everything else in this game is really tight and, dang it, just fun. If you wanted to pack very light, you could just bring a pad of scoresheets, the 8 dice, and some pencils and play on a train or airplane tray table. It’s a fun game with just enough heft to feel like a game for gamers, but it’s fast and has a very low footprint.

Obviously, I really liked the game and my niece liked it a lot, for the same reasons I did. She hadn’t ever played a game where planning out combos for maximum impact was such a key part of the game, and she got into it.

As for my wife, I knew going in this was not her cup of tea, game-wise. Except for Wingspan, she just never gets into games where the key to winning looks like: “A triggers B which triggers C, and oh, don’t forget whenever C then I get to do X.” She played along as a good sport because she wanted to hang out with my niece, but the game was not for her and she essentially said, this is “like 7 Wonders and Macao and anything where the key to winning is to create a chain reaction, and you know those games feel like work to me.” I don’t agree with her that Dice Charmers is like those other games, but I see her point that for Dice Charmers to be fun, you have to like the feeling of triggering one action and having it ripple through, triggering multiple other actions.

As it is, I love me a good combo, so on a scale of 1-5, I’d give Dice Charmers a solid 4, and higher if you told me that you had to carry the game in a purse or briefcase. I’d prefer to play the original Rajas of the Ganges over Dice Charmers, but I suspect I will get far more opportunities to squeeze in the thirty-to-sixty minutes for Dice Charmers than I will for full Rajas experience, and with a bigger box to carry around it might not even be with me when the gaming moment presents itself.

Plus, both versions are available for online play at the excellent and always 100% free, zero advertising website, Yucata. I recommend you open an account (it’s free!) by heading to https://yucata.de/en and then check out the game itself at https://www.yucata.de/en/GameInfo/RajasDice.

Misses:
• A few too many fiddly rules
• Theme is really just glued on