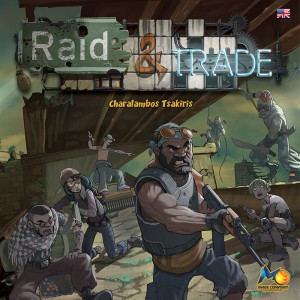 I’ve always been a fan of post-apocalyptic fiction. While I love to read about those kinds of situations, I’m also really glad that I don’t live in those worlds. I prefer my biggest worry being how I’m going to beat my friend Tyler at the next board game we play (usually not that hard of a task).

But that doesn’t mean I can’t have a little bit a fun pretending. Today we are going to look at a game set after the 3rd World War called Raid and Trade. Published by MAGE Company (12 Realms, Hoyuk), Raid and Trade puts players into a post-apocalyptic world where you must survive the chaos after the great war. Is this game of searching and fighting worth your kickstarter dollars? Lets find out!

In Raid and Trade, each player is given a character to control as they try to survive this wasteland. During the game, players will be searching (raiding) houses for resources that can be used to build items, fulfill quests and otherwise help your position in the game. But you are not the only wanderer, and you must contend with your fellow players. You’ll be competing with them not only for houses to raid, but you must also try to trade with them (or just rob them if things don’t go your way). The first player to fulfill one of the games 3 victory conditions, wins!

To start the game, each player selects a character and grabs their unique deck of cards. Each character sheet has a wheel on it to track a players Action Points, Skill Level and Favor/Blacklist points. The game’s modular board is set up in a 3×3 grid and enough houses are placed on it depending on the player count. After the various decks are shuffled, you are ready to begin.

Each player can take one action on their turn (with a different action point (AP) costs) and play proceeds clockwise after that.

Possible actions include:
Move: It costs 1AP to move to a different tile along the road, with 1 additional AP to cross a barricade.

Raid: This is one of the main actions in the game. It costs 6, 8 or 10AP to raid a Small, Medium or Large house (respectively). To perform the raid action, you draw a card from the appropriate deck.

After a successful raid, the house is removed from the board.

Attack another player: To attack another player, you must be on the same tile and road as the other player. It costs 5AP and you must spend a gun token. The defending player can optionally choose to defend by spending 3AP and a gun token. Combat is handled by opposing dice rolls (if the defender spend the AP, or just one roll by the attacker if he didn’t). If the attacker wins, he can either take a favor token, 5 resources of the defenders choice or 3 of his choice.

Interestingly, that’s not the end of combat. The dice also have various symbols on them and even if you don’t win the attack, you might still steal/destroy something else depending on what is rolled. These range from taking/destroying your opponents items to gaining 5AP.

Craft Item: Each player has a stack of unique items that they can craft by spending the required resources and 1AP. Some are permanent and some are one time use.

Trade: Two players can spend 1AP to trade resource tokens and item cards. A player can also choose to trade with the black market by spending 1AP and trading in 4 resources for 1 of any they want.

Outpost Actions: There are few actions that can be taken at the outpost location to gain favor points.

Each player will continue taking actions until everyone has used their APs for the round. At the end of the round, each player draws 2 incident cards and keeps one. These are essentially action cards that will let the players break the rules in various ways. Then players refill their AP to 15 and a new event card is drawn for the next round.

Finally, there are a number of face up quest cards that players can complete on their turn. These require a player to turn in various amounts of resources to complete them.

Note, players can turn in one food resource for 1AP during their turn. They will need to use that or item cards to get about their normal 15AP max.

You are going to want the right group of people to enjoy Raid and Trade. If you want to have fun in this game, you’ll want a group that really enjoys player interaction. It’s easy (especially with the lower player counts) to just wander around the wasteland, raid houses and do your own thing (especially early in the game when houses are plentiful). And honestly, the game isn’t that fun when played that way.

I think the real fun in Raid and Trade comes with interacting with the other players. You want a group of people who will have no problems attacking someone and stealing their items. You want people to be trading with each other so someone can complete that quest or build an item. The houses are limited and will eventually come of the board. That means that players will have to either work with each other, or steal from each other to be successful. If no one is willing to trade and players shy away from combat, you’re going to have a bad time in Raid and Trade.

Although I must admit, raiding the houses was probably my favorite part. Players have to carefully balance their action points and decide if they want the big house that will give them more resources, but also cost 2/3 of their total for the round. Myself, I usually go with the go-big or go-home strategy.

Once you get those resources, and trust me you will get a lot of them, it’s time to decide what to do with them. I usually liked to spend them before they are stolen by my greedy fellow players. For that, it’s decision time. Do you want to hold on to them to complete those expensive quest cards? Or do you want to craft an item to give you a little bit of in-game benefit. I like making the decisions and it is a lot of fun to build these items and use them against the other players. I should note that it can be frustrating that all resources are drawn randomly, but it makes sense thematically.

I will say that the action point system does feel a little clunky in Raid and Trade. It always feels a little weird when you are spending good chucks of AP on various actions. Games tend to be simpler when everything costs about the same and you just choose an action and take your turn. With Raid and Trade you have to manage your points carefully and also plan ahead. Early on in the game, people will be spending those APs freely, but later in the game, as houses disappear, players will become more shrewd with their spending.

I also thought combat was a pretty clever mechanic. I like that you can not only win combat, but you can also gain random freebies based on the dice roll. This can make combat really deadly if you are not careful. I did think it was an odd choice to force the defender to spend AP and a gun token to defend, but it does add some strategy to the game. What that really means is you usually want to be on the offense, not the defense. It’s in that regard that I think Raid and Trade really rewards aggressive game play.

Raid and Trade ended up being a fairly unique game that boasts a lot of player interaction. Between the resources, the trading and the crafting, I almost felt like I was playing in a post-apocalyptic version of The Settlers of Catan where not everyone is nice anymore.

I was given a pre-production version of the game, so the rules were in a bit of a flux during our testing. It’s hard to form an opinion of a game when it changes that much, but I did felt that each iteration of the rules made the game better. I do look forward to checking out the final version of Raid and Trade. The artwork and components are going in a good direction and I think players will be happy with the final product if continues in that path.

If you’d like to become a backer, pledges start at $50 for the full game and all stretch goals. Raid and Trade is scheduled to be in backers hands in June of 2015 and you have until Thursday, December 4th to become a backer. So head over today and check it out.