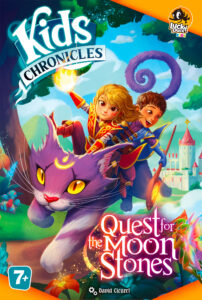 As we have been slowly broadening our social circle for our kids, a few of them have had friends who wanted to come over. With my son, his friend, and my daughter, we took an adventure playing Kid Chronicles: Quest for the Moon Stones from Lucky Duck Games. I was excited to see how they engaged and worked together. Needless to say, great times were had by all.

Kid Chronicles: Quest for the Moon Stones is an app-assisted, storytelling game for 1-4 players that takes about 30 minutes to play.

Quest for the Moon Stones is a cooperative experience where players are apprentice magicians, working through stories and mysteries, earning Moon Stones to become proper magicians. At the beginning of each story, players will be directed via the game’s app on setting things up and introducing the narrative. Players will be shown a scene from the app, where they’ll find characters and items to help them solve the mystery.

Any discovered cards will be placed on the board and used throughout the scenario, either to gain new information by talking to a person or using an object to solve a problem. Players are free to explore different locations and progress through the stories however they wish. Once players solve the story, they’ll receive one of the four Moon Stones required before the final test can be completed, where, if successful, they become magicians.

In the world of detective-style games, not many of them are geared specifically toward the younger demographic. Quest for the Moon Stones is a fun and witty experience for younger kids who like solving mysteries. I have a number of great things to say about the game, so let’s get started. Lucky Duck Games did a great job with the artwork throughout. It’s colorful and eye-catching. The character designs are kid-friendly, with really nothing scary that might turn off the youngest player. In fact, one of the reasons I was able to get my daughter into this game was by showing her the big blue doe-eyed cat that adorns the cover. And to her giddy surprise, it’s a character you meet in the introduction and stays with you throughout the game, helping players should they get stuck on where to progress next.

This being my second Lucky Duck game, I have to say, I could get used to organically learning games instead of reading through rule books. I’m sure you’ll agree once you run through the introduction. The app guides players through the basics of how to play the game by giving them a short story to work through. It doesn’t take terribly long, but it has enough of a taste of what kids will get to experience in each of the full stories, just on a smaller scale. It also explains the functional mechanics of scanning cards and locations on the board. Quest for the Moon Stones isn’t a difficult game for the adults playing along with their kids, but there are helpful text reminders spread throughout on what to do and how. The barriers to learning and playing are virtually nonexistent.

Games such as Quest for the Moon Stones are typically a one-time experience. I know many people consider that a downside, which I understand entirely. Its price point factors this in at $25, similar to other exit and escape room-style games that are once-and-done titles. The one nice feature for resellers is there won’t be anything requiring a reset or replacement.

One feature we discovered while playing through our first adventure was that we were able to stop mid-game. Starting up the app on the next round, we simply tapped the adventure and got back to work. It sort of remembered where we left off. Well, partially. While it internally knows what you’ve progressed through in terms of the story, there isn’t anything in the app that tells you what characters or objects need to be placed back on the board. When you’re setting the game back up in this scenario, unless you took a picture of your game board state, you may have a harder time jumping back in. An inventory system would have helped out in those situations when kids need a break before getting to the end.

It is worth noting that each story can take 45 minutes to an hour, depending on your audience’s attention span and ability to read through the story text. I didn’t feel like that was too long, especially when the kids really got into the stories and started piecing the breadcrumbs of the mystery together. I liked that the mysteries, with their various clues spread throughout, were right in line with what an elementary-aged child could work through. As the grown-up, you might even talk about some of these things to help them piece together a direction to head in. While there is a sort of logical path to finding a problem that gives locations you might start looking in, the game lets you go where you wish. When my son, without any story-based reason, wanted to head to the volcanoes, we could. I really appreciated that the game didn’t feel “on-rail” in that way. If a character doesn’t know something or you present them preemptively with an object, they’ll let you know. You may return later once you’ve learned more. And it doesn’t hurt that you have a cat nearby to help if you get stuck.

Kids love to be in control of their own stories. Kid Chronicles: Quest for the Moon Stones lets them explore those stories at their pace and discretion. It lets them have fun in this imaginary world. My kids had a great time and as a dad, I loved seeing how their minds put together these problems. Even if your family plays through just one time, there are enough opportunities for fun and engagement that you won’t regret picking this up.

Misses:
• An inventory system could have been helpful if pausing mid-game for a later session