We review the abstract strategy game Quarto, Published by Gigamic. In this easy to learn game, players are trying to get four pieces in a row that each contain one of the 8 characteristics. 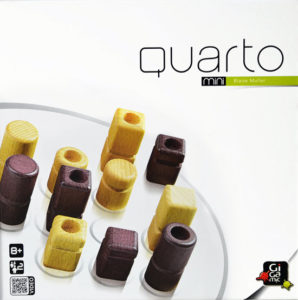 In 1991, a Swiss mathematician named Blaise Müller invented an abstract strategy game called Quarto. It’s been over two decades since this award-winning title has been released and, to be 100% honest, I had never heard of it until now. To be fair, I rarely gravitate towards abstract strategy games, but if it has won awards, it has to be good, right?

So recently, when publisher Gigamic handed us a copy of Quarto Mini, I figured it was time to find out. Quarto Mini is a travel sized version of this decades old game. With some nice looking components and easy to learn rules, it’s time to dive in and see if Quarto was worth a fuss. For clarities sake, we played with Quarto Mini, which is in all respects, just a smaller size of Quarto. So you can consider this review appropriate for either version of the game.

Quarto is a 2 player, abstract strategy game that takes about 10 minutes to play.

At first glance, Quarto seems to have based its game play off Tic-Tac-Toe. The game is played on a 4×4 grid with 16 unique pieces. The object is to get either a row or diagonal of 4 pieces that share a common trait. The first player to achieve that wins.

The components in Quarto are minimal, but still expertly crafted. The game board is made out of wood and contains 16 circles to place the pieces in. The only other components are the 16 wooden game pieces, in two different stain colors. In addition to their stain color, each piece will contain some of the following aspects: tall or short, square or circular, hollow-top or solid-top.

Finally the game comes with a rule book in about a million different languages. Well not that many, but short of you only speaking something rare like Klingon, chances are you’ll find rules in your native tongue.

Learning to play Quarto is incredibly simple. Players take turns choosing a piece for the other player to place on the board. A player wins when they place a piece that forms a row of four pieces (either vertical, horizontal or diagonal) that all share a common trait.

As mentioned in the components section, the traits are: dark or light color, tall or short, round or square, solid or hollow. If a player places a fourth piece and doesn’t see the match, on their opponents turn they can call out the match and win.

The game also has an advanced variant that allows for a player to also win by placing matching pieces in a 2×2 square.

As I mentioned at the start, you will rarely find me playing an abstract strategy game. While I do love strategic thinking, I really want a game with a solid theme to suck me in. That’s also why I’m not a huge fan of those big, complex, dry euro-games. I like to feel the game I’m playing.

That being said, I think Quarto is pretty fantastic. This is definitely one of those games that’s easy to learn, but difficult to master. Teaching Quarto should take all of about 30 seconds, but it’s a game that can easily turn into a brain burner. If you like thinking four moves ahead, and on different levels, then this is the game for you.

For me though, it’s one little mechanic that turned this game from just another forgettable abstract game into something really special. If each player had their own color, and were trying to get 4 in a row with them, than I’d call this a tic-tac-toe clone and tell you to move on.

But that’s not the case. In fact, it’s the mechanic that has you choosing a piece for your opponent that’s absolutely genius. This forces you to not only think about what you are giving your opponent and all the places they can drop it, but also in what position that will leave you. You also need to consider which pieces your opponent will have left to hand you.

I sometimes find myself thinking a few moves ahead, “if I hand my opponent this one, they’ll give me that one, so I have this one to give then…”. I will say that the end game is much more tense than the start. The first 4 or 5 moves are going to be fairly random, as there aren’t enough pieces on the board for someone to win. So expect early turns to go by quickly, while the later turns will slow to a crawl as players try to examine their moves from every angle.

I had a lot of fun playing Quarto, but even with all the strategic thinking it requires, it’s probably still not going to be much more than a filler game for you. But as a quick playing game, it does excel pretty well in that role. It’s fast play time easily makes it one of those “one more game” type of games. Usually we play at least 2-3 in a row. Quarto does make for a great game to play when you are waiting for others to show up to your game night.

Despite my usual aversion to abstract strategy games, I don’t have much to complain about with Quarto. The components are great, mechanics solid, and the game is highly accessible. You can be up and playing in minutes and it will definitely appeal to the strategic thinkers out there.

You can get Quarto in either the regular size or Quarto Mini if you’d like more of a travel version. I actually think I prefer the mini size as the smaller components work fine and I like the portability it offers. If you are looking for a game that you can play with just about anyone, then give Quarto a look.

Final Score: 4.5 Stars – A rare abstract strategy game that plays quick, yet can still capture your attention for every minute of the game.

Misses:
• Abstract nature may turn away some 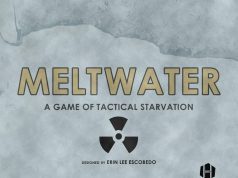