Board Game Review by: :
Marcus Burchers 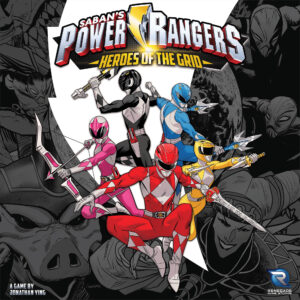 A few years ago, I walked into my local store and saw there was a brand new display for a Power Rangers miniatures game, Power Rangers: Heroes of the Grid. I kind of laughed about it at the time, because when was the last time there had been a serious Power Rangers board game (the only one I could think of at all was one from back in 1994). The idea stuck with me though for whatever reason, and we ended up trying it. Almost three years later, the game has dozens of expansions and has spawned an entire system that’s expanding out to other IPs.

Power Rangers: Heroes of the Grid is a cooperative miniatures game for 1-6 players that takes 90-120 minutes to play. The best experience is with 5 players.

The game is, in essence, a form of tower defense. At the start of each round, the enemy foot soldiers, monsters, and ultimately the boss have a Deployment Phase when they are placed on the board in a semi-random fashion based on a constructed deployment deck. The remainder of the round (called the Action Phase) is fairly free-form, as each Ranger can spend their 2-3 actions (depending on player count) in any way they see fit, with the round not being over until all the Rangers have used their actions.

The Action Phase is where most of the gameplay takes place, and the real meat of the Action Phase is the battle action, which initiates a battle between all Rangers and all enemies in a given location. In a battle, the Rangers get to make choices about the cards and attacks they are using, while trying to avoid or mitigate the incoming enemy card effects. The “A.I.” for resolving the enemy side of battles is very simple, yet effective.

And that is pretty much the game! You have to survive and defend against the enemies long enough to face and defeat the boss, who represents the win condition. Any other outcome is Ranger defeat!

As I said, the Action Phase is where most of the gameplay takes place, with much of that gameplay further focused on the battles within the phase. The entire setup is somewhat simple—enemy cards are lined up in 1-2 rows of 4 cards each, and “resolve” their effects one at a time with Rangers being given the opportunity to play a card between every enemy card’s resolution. Enemy cards will often do damage but can have other effects, such as discarding cards or draining your Energy resource. One of the keys to this is that each enemy card has a certain amount of health, and dealing that much damage to it “defeats” it (turns it face down). Cards that you have defeated still resolve, so defeating enemy cards before they resolve can be a very effective way to mitigate the incoming negative effects. That’s oftentimes more easily said than done.

Each Ranger’s deck represents both their resources, abilities, and also their health. This is one of the important points of tension in the game. You want to get more cards, but getting too many cards to use can leave your deck pretty slim. Taking damage can cause you to discard cards from the top of your deck. If your deck is ever empty for any reason, you are defeated, return to the Command Center in the middle of the board, and use up one of your team’s “extra lives.” If decks were larger, this might not be as much of a source of tension, but the decks are only 10 cards with a typical starting with a hand of 5. It creates an incentive to really defeat as many enemy cards before they resolve as you can.

The limitation on Ranger turns in battles also adds to that tension, as under most circumstances, the Rangers can only play one card. Attacks are usually made by rolling dice (with faces that are slightly against you… 2 blanks, 3 hits, and 1 double hit), with your standard attacks being 2 or 3 dice. For comparison, enemy monsters generally have 3-5 health per card. This means you will be faced with decisions about taking risks or taking a hit now to make a safer play long-term.

One of the big ways the game captures the “power ramp” that is often a part of the show is via the Zord mechanic. Zords provide strong effects that are typically usable once per round, but you don’t start the game with them. As you defeat foot soldiers and monsters, your team “levels up” and unlocks a random one of their associated Zords. Eventually, after you’ve unlocked all 5 Zords, a final level up unlocks the Megazord. The Megazords are very powerful, almost broken effects, but they all feel very rewarding. This is important as the enemies are scaling up as well! In a typical game, the first round is just against foot soldiers, rounds 2 and 3 will deploy one of the two monsters each, and round 4 will bring out the boss. The added firepower can make a big difference.

The heart and soul of this game is the teamwork and each Ranger is unique. They all have an inherent ability on their character card and a powerful Zord that accentuates their theme. For example, the Red Ranger’s character ability is Leadership, which allows a re-roll on an attack, once per battle. His deck features ways to buff and protect teammates, and his Tyrannosaurus Zord is a big attack boost for any attack. On the other hand, the Pink Ranger is mostly strong attacks, but with less defensive capability. Working together based on each Rangers’ strengths and weaknesses is one of the keys to success. Finding combos by communicating can make a big difference. This is even more important if one expands beyond the core game.

I have played a lot of games and in the last couple of years, I have really gotten into cooperative games more as they are what my friends have been preferring recently. Power Rangers: Heroes of the Grid rates in the top 5 all-time for me, and probably my #1 cooperative game. The mechanics of combat and taking damage are ultimately simple, but intuitive and effective. The challenges can be difficult but you are pushed towards working as a team to find combos and strategies to overcome them. It is very difficult for one person to just take over and quarterback, as can be a danger in some cooperative games. Everyone matters to success. Every Ranger has strengths and weaknesses, and they need the rest of the team to succeed. The table presence of the game is also very impressive. The minis are all well-done and detailed, at a larger size than most games.

If you like cooperative games, especially ones that are highly expandable, Power Rangers: Heroes of the Grid is definitely a game you want to give a try. I have introduced it to many people over the last few years since it came out, most of whom were not Power Rangers fans. The system is good and unique enough that people enjoy it for that, even if they weren’t fans of the theming.

Final Score: 5 Stars – Heroes of the Grid is simple to understand and play, but has a lot of depth and inherent teamwork. A really great cooperative.

Hits:
• Simple, but engaging and strategic gameplay in battles.
• Really high-quality, good-looking miniatures (and components in general).
• A high degree of replay value, especially with expansions.
• The system has a potentially big future ahead of it, expanding into other themes.

Misses:
• If you’re not a fan of dice… most of the Ranger attacks do have a degree of randomness to them.
• When you really get into it and do a deep dive on expansions, it is a shelf space hog.