We review Polis, a euro-style wargame published by Devir. In Polis, players are trying to earn the most prestige points over the course of the game by shrewdly managing their empire. 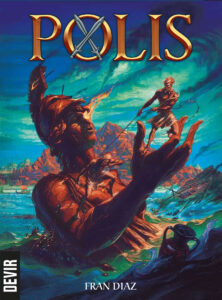 War isn’t always about the battles or the weapons, and board games do a great job of showing those intricacies. Sometimes the focus is the battles (Commands and Colors series). Sometimes the focus is the weapons (Melee and Wizard). There are ones that thrive on the chaos (Combat Commander). There are others that are strategically minded and planning is key (Imperial Struggle). And some are so zoomed in, they give names to all the soldiers to provide a personal attachment (Undaunted: Normandy).

The wargame I am looking at today is unique compared to others for multiple reasons. Polis (which is a reprint with some minor rules reworkings) is a wargame that focuses on the gathering of resources to manage and feed the population of the cities you conquer during the Peloponnesian War of the 5th Century BC. You gain those through trading with foreign countries and pressuring the Greek nations to support your army. What makes this most odd is that combat can be minimal or even optional based on the players. Not optional as in you can play without using the battle rules, but optional in that it’s only triggered by player choice.

Polis can appear overwhelming when figuring out which 2 of the 11 possible actions a player must take on their turn, but all of them can fall into a few categories. Four of them are what I like to call city management (Polis is Greek for city, hence why so many of the actions revolve around the namesake). Three of the actions turn a population cube into a unit, whether a hoplite, galley, or merchant by spending a matching resource. The other city management action is spending resources for a project that can be built in a matching city. These will net prestige (the game’s victory points) at the end of the round and end of the game for whoever owns the city. Yes, that means you can develop a project and your opponent can overtake that city with their own project.

Three of the actions are what I call “military actions”, which require spending one prestige to perform. Yes, to take a military action in this wargame, you have to spend victory points. Two of them are similar: moving hoplites and moving galleys. The final military action is to lay siege to a city, which is one of two ways to gain more cities. Each city has a fortification value printed. The sieging player must have hoplites equal to that and roll that number or more on a four-sided die. If successful, then the city is now claimed by that player and they get population cubes equal to the fortification value. If failed, a hoplite is lost, but if the player attempts it again later in the round they receive a +1 to their die roll.

Another action that requires spending a prestige can be grouped into a category I call “resource gathering”. That action is collecting a tribute. Each traversable land territory has a matching spot on the tribute area and hoplites in that region are temporarily moved to that part of the tribute area. They cover up numbers in columns, awarding resources based on what is shown. Each territory may only produce a tribute once per round. The other resource gathering one can do is trading with foreign markets.

The final actions I call “political actions”, which see the use of the Proxenos. The Proxenos can move from one city to another, but must bribe each enemy unit they move past by paying a silver. The Proxenos may instigate a civil war for another action and that city then becomes theirs.

If there are ever eight total units in a region, combat erupts. Both players draw cards equal to their number of units and take turns being the attacker. The attacker plays two cards, and the defender must match the symbols on those cards. If they cannot match them, a unit is lost. The attacker may gain prestige whether the card matched or not depending on the strength of their cards. At any point before hands are replenished, a player can retreat by paying a prestige.

Turns go back and forth until both players pass. Once either player passes, their opponent must pay an additional resource for every action they take after that point. At the end of a round, both players must spend wheat to feed their people. If there is not enough wheat to meet demand, then prestige may be spent or those people starve and the city is placed back in the neutral pile. Three rounds are played out and final scores are tallied (prestige + total population + projects).

Polis is a brutal game. 35% of actions require spending victory points, and even creating units lowers end game scores. Resources are scarce. Half of unspent grapes and wheat spoil at round end. People must be fed. Additional resources must be spent when one player passes. Decisions can be incredibly tough.

It is a brawl, but not always involving direct combat. I may move galleys that prevent your merchants from trading with Egypt. I may move hoplites that corner you in a peninsula. I may pass early when you have heaps of plans and resources to execute them. Then again, the game can also facilitate tons of combat. It really is up to the play style. Combat and sieges earn prestige, even though they cost to perform. Instigating a civil war or siege in an opponent city can be a huge swing of points. But even with combat-loving players, battles aren’t even possible until the second round due to stacking limits.

One thing I love about Polis is that nearly everything has a thematic connection. When collecting a tribute, you have to pay a prestige to strong-arm the locals into helping, except in your home region, where they happily will give to the army. When a Proxenos bribes a soldier, the silver goes directly into their pockets (out of the game) and not to the army of which they represent. When a new unit is created, it must come from a city’s population, as if they are recruited to join the fight. Very few regions create much wheat, so the Greeks must seek cooperation with foreign markets.

At the same time, a game can be lost early on due to one or two mistakes. In my first play with my wife, she failed a siege attempt but did not have enough prestige to move in more hoplites AND attempt another. If we did not hit the reset button, she would not have earned any more prestige by round’s end, causing her to immediately lose. Performing an action in an incorrect order can result in you not being able to collect the resources you need to finish out your turn as you had planned.

For a wargame, one may be confused by the number of wooden components. There are cubes, which represent soldiers, boats, and city populations. Merchants and each players’ Proxenos are screen printed units. And the player boards for Sparta and Athens are to track six different resources. But the cubes are used to represent different items that a chit/token couldn’t pull off without printing triple the components.

I was already a fan of Polis when Mercury Games released it, so going into this 2020 release from Devir, I had a strong feeling my thoughts would be the same. And I was right. If you already own the original, this is more of a lateral step than a straight improvement or a second edition. It shortens the game by a round and removes one of the resources while improving the component quality.

For those that haven’t played or don’t own the original, Polis is a great pickup for those that have a wide range of tastes. Wargamers will appreciate the decisions focused around positioning and combat, while Eurogamers will enjoy the tight resource management, tough decisions, and plenty of options for scoring.

Final Score: 4.5 stars – A fantastic, punishing look at war that appeals to multiple types of gamers.

Hits:
• Wealth of strategies to explore
• Can feel different based on players
• Appeals to fans of wargames and heavy euros
• Punishing gameplay creates tough decisions
• Thematic connection to all the rules and actions

Misses:
• Can lose in first turns after one or two mistakes
• The game lives and dies by wheat