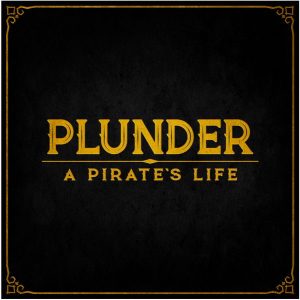 One thing that has always attracted me to board gaming is the physical nature of the hobby. A game with great looking components can really elevate the play experience in ways that can be hard to describe. Amazing art and excellent physical components can really bring a theme home on your tabletop. That’s one of the things that first attracted me to Plunder: A Pirate’s Life. Just looking at the components you can tell that a lot of care when into the production of the game. That’s a great start, but the gameplay needs to match up. Let’s find out if it does!

The goal in Plunder is to be the first player to reach 10 plunder points. You earn plunder points for each ship in your fleet, islands you control, and plunder cards you earned from sinking ships, treasure cards, or just buying them with 5 gold.

There are no rounds in Plunder, players just rotate taking turns until someone wins. On a player’s turn they first draw a resource card for each island they own. Resources, 4 types in total, can be spent to upgrade your ship with more crew, canons, or sails; or to buy a new ship; or for plunder points.

Then the sailing die is rolled. If a 1 is rolled, the storm is moved to a random spot, causing trouble for anyone in it. Whatever you roll gives you move points to split among all your ships. Each sail upgrade gives your ship one extra movement point. If you stop next to an island or an opposing ship, you can battle it.

Combat is handled via opposed die rolls, with each canon giving the ship a +1 and ties going to the attacker. Defeating an island gives the player control of it. Defeating a ship causes it to lose a life, once all three lives are lost, the ship sinks to the briny depths and rewards a plunder point.

If you stop next to an X, you can draw a treasure card which usually grants some kind of bonus.

Your turn ends when you have nothing else to do on your turn (no move points left, or your ships are all sunk).

Looking at the visual, it’s hard not to believe that a lot of love when into the production of Plunder. The ships look great, the art is thematic, and even the insert holds everything perfectly. This is how board games should be produced. Yet, and it pains me to say this, that’s where the love stops.

While writing this, I took an informal poll about everyone’s most hated gaming mechanic. Fellow BGQ reviewer instantly replied, “roll and move”. Other front runners were “lose a turn” and “player elimination”. Thankfully, Plunder doesn’t have player elimination, but it does heavily feature roll and move, with proceeds to derail the fun of the game pretty severely.

The reason most gamers hate roll and move is because it unnecessary destroys player agency in a game. You might have a plan of what you want to do on a turn, but because of the roll of a die, you might not be able to. And since your roll is split among your whole fleet, some ships might not even be able to move on a turn. Sure, you can buy a sail to reduce the risk of being stalled, but to do that, you need resources… which brings me to the other issue with the game.

Plunder is chock full of randomness. From the roll of dice for both movement and combat, to which cards you draw at the start of your turn. You have no control over what resources you acquire in the game. Every island will just let you draw a random card. So even if you want another canon, if you don’t draw a rum card, you can’t buy one. There is a lot of ways Plunder could have given player’s a sense of control over their actions, but the game ended up being stuck in neutral thanks to its heavy reliance on randomness.

Even if you can survive rolling for movement, opposed rolls for combat, and getting the resource cards you need, Plunder also has a runaway leader problem. Once a player gets more ships and more islands, it becomes hard to stop them. If you have some unlucky rolls early on, and your ship sinks, it’s going to be hard to come back from. This is especially true if your opponent already has a few islands or ships in their fleet. If you can’t afford to rebuild your ship, then you must roll two dice and hope for doubles. Don’t get that? Then you draw resource cards for any islands you still might control, and your turn ends.

Overall, it feels like Plunder just needed a lot more playtesting. Which is sad because the components just make you want to play the game. I really wanted to like Plunder because I love the theme and the bits are great. But the experience just isn’t there.

Does Plunder: A Pirate’s Life look great? Absolutely. But it can hide the flaws in its design. It’s just too hard to do the things you want in a game. I’m always fine with a little randomness in my games, and I love a good dice chucker as much as the next gamer. But I don’t want to feel like the luck of the game controls me. I want some sense of player agency. It’s just too hard to do what you want in Plunder: A Pirates Life when the winds of fate aren’t blowing your way.

So as attractive as the game is, I have no desire to venture out into these briny seas again. The game is too random, suffers from a runaway leader problem, and uses too many mechanics that just aren’t enjoyable.

Final Score: 2 Stars – While the components are great, the gameplay needed to spend more time in the oven.

Misses:
• Roll and move can easily derail plans
• Random resource card draws can make it hard to do what you want
• Runaway leader problem
• If you lose it ship early, it’s really hard to recover