We review Planet, a family weight game published by Blue Orange Games. In Planet, players are drafting tiles and attaching them to a 3d globe in the hopes of scoring cards for terrain majorities. 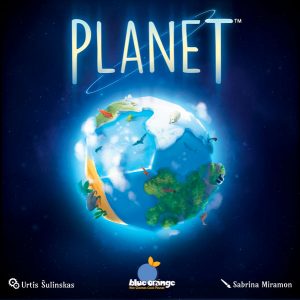 Blue Orange Games seems to be carving out quite a name for themselves with their accessible line of family games. Kingdomino was a fantastic take on dominoes, and Photosynthesis was a mean little game with some pretty 3d trees. Both have made their way to my tabletop quite often.

Today, we are going to be taking a look at the newest offering from their unique family line, Planet. Designed by Urtis Šulinskas, Planet has players crafting their own 3D globe over the course of the game. Was it a hit or just a gimmick? Let’s find out.

Like many of Blue Orange’s family games, the gameplay in Planet is easy to learn. The game plays out over 12 rounds, with each player drafting a terrain tile each round. Tiles are made up of a variety of terrain types (snow, ocean, forest, etc…) and after being selected, a tile is magnetically attached to a player’s globe.

Starting in round 3, animals begin to appear. These cards are awarded via a simple majority mechanic—for example, whoever has the largest forest next to an ocean gets the card. These cards are worth 1-2 points at the end of the game.

The game ends after the 12th round. Each player reveals their secret goal card, possibly scoring bonus points. Each animal card that matches your goal card is worth 1 point, and 2 points if it doesn’t. Most points wins.

The main draw in Planet has to be the 3D model players will be building on. It is definitely fun to hold and rotate, will be sure to turn the heads of people walking by. However, in practice, it ended up being a bit of a mixed bag. First, the magnets weren’t as strong as I would have liked. In one of our games, someone dropped their planet on the table accidentally and half of their magnets fell off. This pretty much ended the game right there as there was no way to remember where all the magnets were. Much stronger magnets would have helped alleviate situations like this.

Second, it makes it difficult to see what you and other players have going on. There is a lot of asking people “how many mountains do you have” or rotating around to count your total oceans. Depending on how serious your players are in the game, this could be a non-issue or a majorly frustrating. While I think that the game would have functioned a bit better with just flat tiles on the table, it would have been much much less cool.

Even though the gameplay in Planet is very light, there is a lot of forward thinking that is required to win the game. As players can see all the cards laid out at the start of the game, you really have to start planning ahead for which ones you want to grab. The obvious choice is to go for animals matching your terrain type. The whole two birds with one stone thing. Yet the nice thing about the card mechanics is that it rewards you for collecting animals NOT matching your secret terrain type. This helps create some interesting situations where you clearly want to grab those snow cards to hit the bonus, but also want the other terrain for the extra VPs they grant.

Finally, overall I think the art in Planet is pretty good. The animal art is nicely done on the cards and the box cover looks great. My only quibble is with the terrain art on the magnet tiles. In general, it feels a little generic and I would have liked to see a bit more variety with a more rendered look. In comparison to the other art in the game, the tile art feels a bit mailed in.

I think Planet is going to be a nice hit for Blue Orange Games’ core audience. As a family weight game, it not only has a cool 3D element that’s sure to be a crowd pleaser, but the rules are light enough that you can get it to the table with just about anyone. The only downside is that the magnets aren’t as strong as they should be.

For your gamer group, you can consider Planet to be a “super filler”. It’s got too big of a footprint to work as a pub/travel game, but the gameplay is light enough that you can play it in about 20 minutes. And at the end of the game, you really get a nice feeling of creating something when you look at your planet in all its 3D glory.

Final Score: 3.5 Stars – A solid family game that’s both easy to learn and has some great 3D bits.

Hits:
• The 3D planet gimmick is neat
• Easy to learn, quick to play
• Scoring mechanic doesn’t pigeon hole you to your secret card

Misses:
• Magnets needed to be stronger
• Wish the tile art was better