We review Pikoko, a trick take card game published by Brain Games. In Pikoko, players are trying to earn the most points by currently guessing how many tricks each player will take, however you can only see other player's hands, not your own. 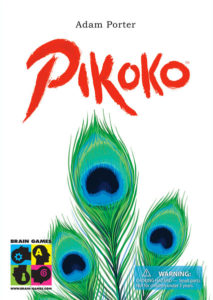 Some of my earliest gaming memories come from classic trick taking games. As a good Midwestern boy, I’m pretty much a shark at Euchre. And I’ve played hundreds, maybe thousands, of games of Spades online. But in the recent, past board game publishers are doing away with a traditional deck of cards and giving us trick taking games with unique looks, feels, and mechanisms.

Today we are looking at Pikoko, a trick taking game for 3-5 players that plays in about 30 minutes. It plays best with four or more players.

So on the face of it, Pikoko is a fairly normal trick taking game with a bidding element. The hook here is you can see all of the hands other than your own. Pikoko comes with nice peacock-shaped plastic card holders to keep your hand easily viewable to everyone other than you.

At the start of each round players will bid on how many tricks they think each player will take. If you bid exactly the right amount you’ll score two points. If you are off by only one, you’ll score one point. Otherwise, you score nothing. You also must play a confidence card before the round starts, choosing a player who you are fairly certain will get the exact amount of tricks you bid. If you are correct, you’ll score an additional three points, but you’ll lose one of you are wrong. There is a +1 confidence card that will just score you an extra point no matter what if you prefer to play it safe.

The tricks themselves play out much like a normal trick taking game with obvious fact that you aren’t playing your own hand. Instead, you choose cards from the hand of the player on your left. There is almost always a trump suit and there are a handful of cards that can be used as any of three suits. After all 8 tricks have been played, players score for their correct and/or close bids and their confidence cards. Play continues for three rounds and then the player with the highest total score is the winner.

The thing I love about trick taking games is how quickly and easily the play, but yet they still provide enough depth that you feel like you can get “good” at them rather than the cards playing themselves. Pikoko, unfortunately, complicates matters considerably while making most decisions feel entirely too easy.

The conceit is clearly that the uniqueness is in the Hanabi-style hidden hand. In reality it makes the game much slower to play as you have to either reach across the table and perilously pull cards out of your opponent’s card holder or explain to them which card it is you want them to play. This takes a lot of the air out of the trick taking game experience for me in a way that’s hard to really explain, but comes down to the fact that it’s no longer a casual tossing of cards across the table, but more time is spent saying “second on from the left… no… my left.”

And all this rigmarole might be worth it if it added much to the experience. Unfortunately it really doesn’t feel like your hand is hidden at all. Instead, it just feels like the hand to your left is “your” hand and a couple other people are playing with their hands face up. You don’t own your own hand any more than you do the others; you just have to bid on it without seeing it.

The fact that everyone’s hand except yours is visible means you have a really good idea how a trick is going to go. Hidden information is the key to having interesting decisions to make during trick taking games. Unfortunately Pikoko has less hidden information than basically every other similar game out there. If you are leading a card from the player on your left, you’ll be very confident in how many of the tricks will play out even without seeing your own hand. Of course you could start cutting a suit and trump something unexpectedly, but it doesn’t happen very often as most cards are in the game and you should know roughly how many of each suit you have.

Finally, the confidence cards add a huge swingy element to the game. On the positive side, it adds almost a social deduction element to Pikoko. Say everyone bids exactly three tricks on your hand. Well, people may be likely to use their confidence card on your hand since people are all working toward the same goal. But maybe you then decide to not hit that target exactly, because you assume people are confident in your hand and you try to play the traitor, sort of. There is a bit of reading the intentions of other players are the table in your bidding, but it’s not enough to save the game from the many superior trick taking games that are out there.

Pikoko looks beautiful on the table and that table presence is what drew me to this title to begin with. That and, of course, my love for trick taking games. I appreciate every attempt at a new spin on the classic trick taking genre, but this one misses fairly wide. The game just plays out so much slower without any additional interesting things going on to make it worth it. In fact, having so much more open information just makes Pikoko even a bit more boring than similar games.

Hits:
• Looks great on the table.
• Bidding aspect adds an element of reading other players.

Misses:
• Having to play out of an opponent’s hand is cumbersome.
• All but one hand being open to you makes the decisions less interesting than normal trick taking games.
• Confidence cards can swing games wildly.