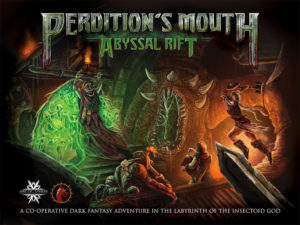 When I made the transition from playing mostly RPGs to focusing on board games, one of my gateway genres had to be the dungeon crawler. While the RPG experience can never really be replicated as a board game, the dungeon crawler is probably the one that comes the closest. This is probably because it does a good job of simulating the combat aspect of an RPG, specially Dungeons and Dragons.

Today, we are going to delve into one of the most unique dungeon crawlers I’ve every played, Perdition’s Mouth: Abyssal Rift. There is a lot that sets this game apart from the standard fare of dice chucking fantasy board games. But is it right for you? Let’s dive in and find out.

In Perdition’s Mouth, player’s are delving into the depths of a cultist stronghold to embark on a series of missions. The game can be played as one-off sessions, or as a linked campaign.

During the game, each player choose a unique hero to command and must work together if they hope to make it out of the rift alive. The gameplay embraces the eurogamer style of play, eschewing dice rolling and hacking-and-slashing for a more unique rondel based action system. Players definitely need to employ solid teamwork and tactics if they hope to survive.

This was the first game I played from Dragon Dawn Productions and, overall, their production values were excellent.

The highlight of the game is, of course, the dozens of sculpted minis. Perdition’s Mouth has an otherworldly feel, as many of the monsters have an almost alien like look to them. The sculpts in general are great, and beg to be painted.

Instead of a tile based system, the game comes with 4 double-sided game boards. I must say, I liked this direction as it makes setup much quicker. While it cuts down on the replay value a little, it frees me from having to hunt for a dozen different tiles during setup.

The main mechanic of the game utilizes two different rondels. One for the heroes and an AI driven one for the monsters. The hero rondel has holes in it to track player actions, while the enemy one uses a dial and glass bead system.

Finally, the game’s rulebook is excellently done. While this 40+ page book is incredibly thorough, it does make it a tad intimidating. The rules for Perdition’s Mouth actually aren’t all that hard, there is just a lot to take in when learning and plenty of “little exceptions”. That being said, I had zero issues learning the game from the rulebook.

Perdition’s Mouth is a fairly involved game, so, as usual, I will provide a high level overview here. For the full rules, you can download a PDF here.

To setup the game, a scenario is chosen and each player chooses a unique hero. The scenario card will tell you what starts on the board, which monsters are in play, and also provides a large amount of thematic text to get you going.

Games of Perdition’s Mouth are played out in a series of rounds, with each round having two phases.

Hero Phase:
Players can take their turns in any order. A players turn has the following steps:

1. Gain Action Points: Based on a player’s current health.
2. Move your hero peg on the stone of destiny.
The stone of Destiny has a number of different areas, each of which is limited to 1-3 spaces for players. Different options include:

A players action points determine both how far on the rondel a player’s peg can move, and also how powerful their action is. The action points are shared between moving the peg and taking the action, so the farther a peg moves, the less powerful the action will be. Cards can also be played to boost an action’s effectiveness. Note: players do not draw cards at the end of their turn, only when taking the rest action (some actions will also grant a bonus card draw).

Hero attacks are handled by using an attack space on the rondel. A player can play cards with the attack icon to boost their attack value. After that, a response card is drawn and the number is added to the monsters defense value. The hero must BEAT the monster’s defense, if so, they do 1 point of damage.

After all heroes have taken their action, the monsters get to go.

Enemy Phase:
1. Draw a response card, check for a red symbol. If one is on the card, monsters are moved from the reserve pool to the spawn pool.
2. The number on the response card indicates how many spaces the marker moves on the enemy watch stone. Enemies take the action of each space the marker lands on that turn.
Actions include:

Monster attacks work similar to the heroes. However when a hero takes damage, they must move their action tracker down and then draw a wound card. These not only clog up a players hand, but can affect them in various negative ways.

After the enemy actions, the round ends and a new one starts with the hero phase.

Games of Perdition’s Mouth usually end when all players have escaped out of the exit, or have died.

As I mentioned earlier, Perdition’s Mouth is definitely one of the most unique dungeon crawlers I ever played. It takes the standard move, roll dice, smash monsters mechanic and tosses it in the trash bin.

What it gives us instead is something that’s inspired from a eurostyle of game. The rondel mechanic really forces players to not only think about the best use of their actions, but optimize which player does what. While most dungeon crawlers have players running up to monsters and beating them repeatedly, that’s not how things work in Perdition’s Mouth.

There are limited spaces for moving and attacking, and if all the attacks are filled with other players, you’ll have to do something else on your turn. One round you may charge in and whack a monster, while next he might have you moving away to allow someone else to attack, with the next having you rest to gain cards back. Teamwork in Perdition’s Mouth is of the utmost importance.

This is especially true because Perdition’s Mouth works almost the opposite of most other games in the genre. Many dungeons crawlers have you acquiring skills, levels, armor and other treasures throughout the game, increasing your power.

However, in Perdition’s Mouth, you become weaker as the game progresses. As you take damage, you action points decrease, as well as your attack power and defense. Combine that with adding wound cards to your deck and Perdition’s Mouth can be a really unforgiving game. Expect the cold embrace of death to wrap its arms around you quite often as you lose scenarios, sometimes more than once.

While Perdition’s Mouth does a great job of reducing the randomness found in a lot of dungeon crawlers, one area where I think it could have focused a bit more was with the enemy actions. The response card drawn dictates how many actions the enemies will take that round. Most of the time, it’s 1-3. However, occasionally it will be as many as 4. Those round can feel really unbalanced and particularly punishing. To see your enemies attack, spawn, move, and attack again can be really frustrating, especially when you are barely keeping your head above water. I wish they would have capped it at 3 actions or less.

The combat system in Perdition’s Mouth, for the most part, works pretty well. The AI for the monsters is pretty easy to use, and all the enemies feel fairly unique. The only time the game suffers is when you have large groups of monsters. As you usually only ever do 1 point of damage per attack, combat with 4+ higher level enemies can turn into a slog that will have you watching the clock for the end.

Thankfully, this can be alleviated by the end game goals. The goal in most scenarios isn’t to clear out the dungeon. It’s to make it out of the exit. This is where teamwork and tactics once again becomes required. You plan with your fellow players the best use of your actions, and the best way to get out alive. More than once we ignored some tougher monsters and just ran for the exit. If you tried to kill every monsters in the game, it would take hours and hours.

Finally, let’s talk about player scaling. Notably, there really isn’t any. 4 players seems to be pretty optimal. When you get above that, the player rondel gets pretty clogged. However below that and there is nothing to stop the enemies from steamrolling you. They don’t scale based on player count. The rulebook even suggests when you only have 2 players, for each player to run two heroes. I never really liked that option as I always preferred to just focus on one hero, so I wish there were some kind of scaling rules.

Perdition’s Mouth: Abyssal Rift ended up being a clever hybrid of a dungeon crawler board game and a eurogame. While no one is going to confuse this game with another trading game set in the Mediterranean, I can definitely feel the inspiration from the euro style of play.

That being said, I don’t think Perdition’s Mouth: Abyssal Rift is going to be for everyone. There are players that just want to wade into a group of bad guys and dish out the punishment. This absolutely isn’t a game for those types of players. There is no dice, actions are limited, and the game can be particularly punishing at times. However, if you love intense cooperation, planning, tactics, and even a bit of puzzle solving, then you might really enjoy Perdition’s Mouth: Abyssal Rift.

Finally, while the game does have a bit of a learning curve, and it makes no pretenses about how nasty it can be, it can also be a rewarding gaming experience. Once you get over the hump, you are treated with a unique dungeon crawler that can keep you on your toes for many hours of its almost two dozen scenarios.

If you’d like to pick up a copy of Perdition’s Mouth: Abyssal Rift, you can get it for about $90.

Final Score: 4 Stars – A very unique dungeon crawler that’s probably unlike any other you’ve ever played.