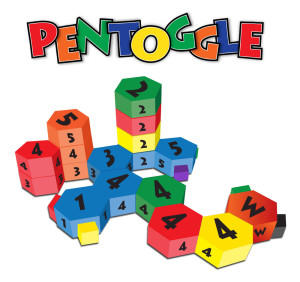 I like all kinds of games, from unthematic Euro point salads to “dudes on the map” games like Bioshock Infinite (didn’t see that one coming, did you…), from cooperative LCGs to train games. I love playing games.

I also like to force my family play games with my family. So finding games that both my children and my wife would like to play is a challenge.

Pentoggle is an abstract, strategic tile matching game in which you try to match tiles based on either numbers or colors, both horizontally and vertically. It is a two to six player game that can be played between 45 and 60 minutes, depending on the number of players and how quickly they play.

The object of the game is to match either five of the same number tile (numbered one through five), all of a different color (red, orange, yellow, blue and green), or match five of the same color, all numbered one through five. Players earn points by placing tiles and completing rows of tiles. The player with the most points is deemed the best Pentoggler ever, at least until the next game is played.

Players begin the game with five tiles taken randomly from a bag and place them behind a screen to keep wandering eyes from prying. The player with the highest number total on their five tiles is the first player. On their turn, a player can:

Tiles placed are then immediately scored. Scoring is based on the total in the row AFTER the tiles are placed. For example, if the row consisted of a red 4 and red 1 and the current player places a red 2 and red 5, they would earn 12 points. 10 bonus points are awarded for placing the fifth tile in a row. Finally, if a player plays all five of their tiles in one turn, an additional bonus of twenty-five points is awarded. (Note: There are five wild tiles in the game. These tiles earn no points but can be used as a substitute for any color/number tile.)

The game continues until a player places their final tile and there are no more tiles in the bag. Each remaining player gets one more chance to place tiles, then the final score is tabulated. The total of the tiles still in a player’s hand is backed out of their score, with a penalty of -25 points for a wild tile. After these deductions, the player with the highest score is the winner.

I enjoyed playing this game, especially with my family. The tile placement is unique. Each tile is a hexagon. The top of the tile has the number, the bottom is blank and the sides of the hexagon are alternately numbered, matching the number on the top of the tile, and blank. Tiles can only be placed with a blank side matching a blank side so that all three numbered sides are visible. This creates an interesting pattern in your game space as rows are not straight rows but snaking in different directions. When the fifth tile is placed in a row, locking blocks are placed on exposed, blank sides of the tile, if any are showing, preventing further tiles being placed in the chain. That doesn’t prevent you from building off of the three middle tiles, or, more importantly, building upwards.

One of our favorite mechanics in the game was the vertical building, creating columns. The same rules apply, such as a column can be only five tiles tall, and can only include five different numbers of the same color (again, order does NOT matter), or five different colors of the same number. Also, a bonus of 10 points is still earned for placing the fifth tile in a column and a locking block is placed on top of the fifth tile to make sure everyone knows that no more tiles can be placed in that column.

The addition of vertical building can create interesting scoring opportunities. If you can manage to legally place multiple tiles in a horizontal row on top of an already existing horizontal row, you will score both the vertical AND horizontal points (this does NOT break the one row/column only rule, as all of the tiles were placed horizontally. You could not, in the example I just gave, place a third tile in one of the columns as that would be building both horizontally and vertically).

Finally, and most importantly for me, the game was fun with my family. My children understood the game after only a couple of practice turns. They enjoyed trying to finish rows/columns to get the 10 point bonus and learned how to take advantage of scoring points both vertically and horizontally. Also, due to the frequent scoring, addition/subtraction math practice was hidden within each game. We just made our youngest be scorekeeper! Finally, we all also enjoyed how unique the board looked at the end of each and every game.

Pentoggle is an enjoyable tile matching game. I LOVED the option to build columns and score points vertically. I also enjoyed the tension between deciding if I should play a tile now when I know I cannot complete a row, thus leaving a potential high scoring opportunity for my opponents versus holding on to the tiles and risking one of my opponents completing the row before I get my next turn.

Finally, as a non-gaming benefit, the constant scoring can be a way to let a younger family member play a board game while simultaneously practice addition as the scores in this game can get pretty high, especially with lesser player counts.

The Kickstarter campaign is scheduled to begin soon. If you are looking for a family friendly tile matching game, I recommend that you check it out. Until then, you can find out more info on their website.