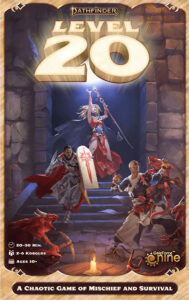 As a lifelong Dungeons and Dragons player, level 20 was always the carrot on the stick for us players. Epic level was where you truly became a force of nature. However the sad reality was that we rarely ever made it that far. Campaigns usually fizzled out somewhere in the grind between levels 9-15. Players would get bored of their current character and want to try something new. So we’d fire up a fresh campaign for the umpteenth time. But hey, that doesn’t mean that no one ever hits level 20.

In fact, that’s what we are talking about today. Pathfinder: Level 20, designed by Dylan Birtolo and published by Gale Force 9, is a board game about a fighter trying to get those last few experience points to hit the 20th level. Looking forward to being an all-powerful fighter on the brink of greatness? Too bad because in this game you are not the fighter, but the lowly kobold trying not to become those last few earned XPs.

The goal in Level 20 is to be the last kobold left standing. Every round, each kobold will take a turn, and then the fighter will go. On a player’s turn, they get two movement points to spend, each of which will let them move one space. They can also spend ferocity tokens for extra movement points. Instead of using a point for movement, a kobold can use a movement point to search a junk pile for treasure, or to recover ferocity. Treasure comes in the form of one of four treasure cards that will help the kobold stay alive.

After all kobolds have taken their action, the fighter activates. Much like the traditional “big dumb fighter” is aught to do, the standee simply charges four spaces towards the nearest kobold. If she enters the same space as a kobold, it’s immediately slaughtered. I mean, a lowly kobold doesn’t stand a chance against a level 19 fighter even in the best of cases. The only chance a kobold player has is if they can play treasure cards to forestall death.

The game ends when either there is only one kobold left standing (the winner) or the fighter has lost their 8th pride token (lost via card play). In that case, the fighter storms off to find easier fodder. The kobold who dealt the final humiliation to the fighter is the winner. (That’s what we call kill stealing folks.)

I must say, Level 20 certainly has an interesting theme that’s nothing if not unique. In most games, we would be playing the powerful fighter, smashing monsters left and right. So it was kind of fun to be on the other side of that coin, being forced to use your wits to say alive. As a kobold, you have no offense to speak of, so you have to rely on trickery. You are the roadrunner, not the coyote.

Survival comes not only from the cards you can play, but the other kobolds as well. This is why turn order really matters in this game. If you are going first in a round, you need to play it safe and make sure you are well out of striking range of the fighter (or have a trick up your sleeve). But if you are going last this round, you can actually take some chances because you’ll know who the fighter is targeting (always the closest kobold she can see). This little bit of strategy helps keep the game interesting.

That being said, at the end of the day, this is very much a beer and pretzels game that is definitely pushed up a notch by its clever theme. If you were ants trying to run out of the way of a rolling rock or something else less interesting, I could see this game languishing on store shelves. But its clever theme, accessible rules, and style of play makes this a great convention game. Something you can sit around with a large group and not take things too seriously.

I say large group, because you’ll want at least three or more for this game. We tried it at two players, and it was kind of boring. With three, there is a bit more strategy involved. However, once you get up to 4 to 6 players things get interesting. In that realm, a second fighter is introduced to the game, which makes for all kinds of mayhem.

The other thing to know about Level 20 is that it has the dreaded player elimination factor. I’m rarely a fan of that in games, especially ones that can take 30-40 minutes. So it’s something to be aware of before you dive into the game. If someone is unwise (or unlucky) and ends up getting killed in the first five minutes, then they could be watching from the sidelines for a long time. An easy house rule would be to make it a game where the first person eliminated is the loser and you just don’t want to be the loser.

Level 20 definitely hits on high notes for its theme and accessible gameplay. While I wasn’t a fan of the player elimination, that can very easily be house ruled. I think the game also plays a bit too long for what it is, 15-20 minutes would be the sweet spot for a casual game like this. That being said, if you are a fan of the theme, and are looking for a light filler game, it certainly makes for an entertaining experience. Especially if you can gather the 4+ players to make it really shine.

Final Score: 3 Stars – A clever theme paired with some easy mechanics make this a solid play for larger groups.

Hits:
• Turns the DnD concept on its head
• Easy to get to the table
• Fun with large groups

Misses:
• Runs a bit long for what it is
• Player elimination