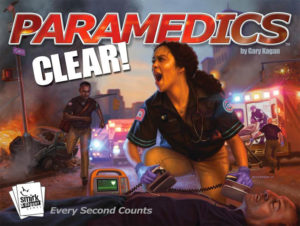 Some games give you a chance to relax, turn off your brain, and enjoy an almost zen like experience. Tokaido comes to mind, a nice leisure stroll through ancient Japan. And then there are games like Paramedics: Clear! who run up to your board game shelf and punch those games in the face, all while screaming at you to move faster and do better. I hope you’re good under pressure.

The goal of Paramedics: Clear! is to not only save lives, but to save more than your fellow Paramedics. That’s right, this was surprisingly a competitive game.

Each game of Paramedics: Clear! is played over three increasingly shorter rounds. On a player’s turn, they will need to treat all patients under their care. Every patient has a number of injuries, and to sustain a patient, you must treat at least one of their injuries each round.

Treating an injury requires discarding 1-2 cards of a specific color. Doing so will let you place a matching token on the injury. Once a patient has all their injuries treated, they are moved to the hospital (score pile) and two new patients are drawn, the one kept must be sustained immediately while the other is placed face down on another player’s gurney.

Easy enough right? Oh, I forgot to mention that a player’s turn happens in real-time. Round 1 gives players 60 second turns (with rounds 2 and 3 dropping that time by 15 seconds each). Using the free iOS/Android app will not only act as the timer, but provide that familiar heartbeat sound effect that will go critical in the last 5 seconds. Any patients not sustained at the end of your turn goes to the morgue and will be negative victory points.

If you have extra time on your turn, you can also prep for future turns by spending cards to create extra treatment tokens and store them in your ambulance. You can also spend cards to buy upgrades. Once you’ve finished your turn, you hit the timer and start it immediately for the next player.

Overall, Paramedics: Clear! isn’t a difficult game to learn. However I do want to suggest that new players be taken through a round or two without the timer to really understand the concepts of the game. Things like sustaining a patient or when to draw new ones aren’t immediately intuitive. The natural inclination is to try to fully treat as many patients as possible on your turn. However with only a 5 card hand, curing a patient with your last card will lead to disaster, as you’ll have new patients to sustain without any cards to do so.

That being said, Paramedics: Clear! can be insanely tense and exciting. For me, this happens in the later rounds of the game. When that timer gets down to 30 seconds, it can be nerve-wracking. There will be so much you want to do, and the previous rounds almost lull you into a false sense of security. When you are used to have having 45 seconds, those missing 15 can make a world of difference.

I’ve heard the term “heart attack in a box” batted around with Paramedics: Clear! and that’s really not far off. People who don’t like high stress situations aren’t really going to enjoy this game. But for the rest of us, it’s a lot of fun. One of my favorite memories is of a player in the last 5 seconds of her turn, the alarm blaring, throwing down 3-4 cards all over her player board and hitting the end turn button. I asked her what she was doing. Her response? “Panicking”. I was sold.

If there is a downside to Paramedics: Clear!, it’s that the player interaction is fairly minimal. That was actually a bit a surprise considering publisher Smirk and Dagger are kind of known for having some solid ways to screw with your opponents. In Paramedics: Clear!, it basically comes in two forms. The first is with some minor “take that”, where you get to hand out a patient to your opponents. The other way is trading cards with your opponents (at a 2:1 ratio). But overall, when it’s not your turn, you’ll be spending the downtime prepping for your next.

Finally, I wish that there was a bit of player scaling in the game. With 2 players, the patient deck feels a bit large and the game goes on longer than it should. By the end of the 3rd round, we were ready for a break. Fortunately this can be easily solved by pulling out some cards or even skipping round one, which I am a fan of, because it’s rounds 2-3 where the real excitement happens.

As a player who is usually as far from the AP side of the gaming spectrum as you can get, I’m always excited for real-time games. I abhor games with really long downtime, so game that’s not only filled with tension, but has quick player turns is a win in my book.

Paramedics: Clear! probably isn’t going to be for everyone, because it can be stressful. It’s also not a game you are going to be playing one after another. After one game, you are going to want something to calm yourself down. That being said, Paramedics: Clear! is really unique and does a great job of simulating the tension of a high stress job. Even if it doesn’t sound like your cup of tea, I’d recommend trying this one at least once, just feel that 30 second turn panic that always seems to set in.

Final Score: 4 Stars – A clever and unique game that will provide a lot of tense moments, but will definitely require a break between games.