We review Pan Am, an economic and worker placement board game published by Funko Games. In Pan Am, players are building out routes and trying to sell them to Pan Am to buy the most stock. 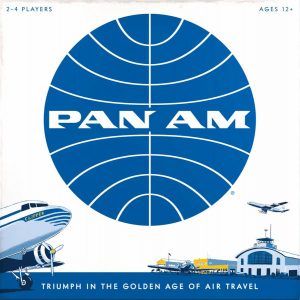 While maybe not the best known airline today (since it’s been out of existence for over 30 years) Pan American Airways was once the pinnacle of air travel. Their globe logo was the second most recognized trademark in the world at the time. They carried 11 million passengers to 86 different countries in 1970 alone. They made advances in air travel that are still in place today and are often referenced in pop culture that romanticizes early air travel.

Well today we are taking to the skies of early passenger air travel, hoping to leave rich (all well before the unfortunate bankruptcy thing happens).

In Pan Am, the board game, you’ll be in control of a small start-up airline making your own routes across the world. Mostly with the hope of having Pan Am expand, take over your route, and pay you handsomely. You’ll use that cash to buy stock in Pan Am and hope to have the most when the game is over.

You’ll accomplish this by placing engineers on the board to carry out actions. In general, your options are:

The first three actions are all sort of auction-like placements. There are pre-printed values on the board (3, 5, 7, and 9 for airports, for instance). Place your engineer on a value and, if you aren’t outbid, you’ll pay the cost to the bank and get the action. However, if someone places on a higher value you’ll get your engineer back to be able to place them again. Once all engineers are placed, the actions will resolve.

Those first three actions all also really just serve the purpose of helping you do the fourth one: claim a route. This is effectively the goal of the game. To claim a route you have to have “landing rights” at both cities and a plane with a range that can cover the route. To have “landing rights” you must either have an airport in the city, have that city’s destination card, discard a card matching the same region as the city, or discard any two cards from a matching region.

As you claim routes you’ll increase your income that is paid out between rounds. But more importantly, you’ll be hoping to have Pan Am buy these routes from you. Once all actions have been resolved, the Pan Am expansion happens. You’ll roll an expansion die a number of times based on this round’s event card and Pan Am will claim routes, starting in Miami and following marked paths based on the die result. There is also one side of the die that shows the Pan Am globe which allows all players to sell a single route to Pan Am anywhere in the world.

When you sell a route to Pan Am you get an influx of cash right away, based on the length of the route. You’ll also get your plane back that was on that route, allowing you to use it to claim more routes next turn without having to invest in more planes. Before the next round starts, everyone in turn order and buys as much stock in Pan Am as they would like. Then the next event card is revealed which can change the stock value, add a new rule for this round, and dictate how many times the expansion die will be rolled.

This continues for seven rounds. After the final round, the player with the most stock in Pan Am is the winner!

Pan Am is a unique blend of a handful of mechanisms, worker placement, and bidding. Route building. Even a bit of set collection if you hold your head just right. And it all comes together in a perfectly… average… experience.

Without a doubt, my favorite part of Pan Am is the bidding and worker placement. Claiming routes is key to being successful and profiting, but if you spend too many workers claiming routes you won’t have them to build airports and buy planes that you actually have to have to build them. Bidding on worker placement spots is similar in style to Stockpile—one of my favorite light economic games. Since the values are printed on the board you can always just jump to the highest price and make sure you get something.

But obviously you want to buy low if you can. Maybe then your opponents will outbid you. Maybe they want that airport too. Or maybe they just expect you are willing to outbid them and they want to deplete your cash so you can’t afford as much stock. All of the game’s intrigue is found in this placing of workers.

From there, the resolution is pretty rote. You place an airport. Grab the cards you won. And place some planes on routes. Choosing routes doesn’t often present too much of a choice—just grab the longest one you have the correct landing rights for. On the off chance you have multiple options, you can try to block things your fellow aviators might be aiming for.

After the expansion of Pan Am you’ll have an opportunity to buy stock. As much as you can afford. If you spend all your money though, you won’t have any left for the next round’s bidding. You can try to get into a cadence where you spend all your money one round and take the next round just doing actions that don’t require bidding (like claiming routes and gaining directive cards), but you’ll often want something on hand to at least bid up opponents.

The stock portion of the game is more of a mixed bag. When the next round starts the stock price will change. For each round there are four different event cards, two of them make the price go up 1, one makes it go down 1, and one sets it to a specific value. This means, largely, the price increases through the game but not always. And the jumps from round to round are often very small, but there is a possibility of larger jumps, especially if there are some events moving the price down early.

You’ll feel tempted to buy at least enough to keep up with your opponents. It is possible to take some risk by holding off on purchasing so you have more cash and occasionally you’ll be rewarded by stocks being even cheaper to buy the following round. You can’t sell your stocks (unless you get into a position where you can’t afford something you bid on, but then you sell for less than their value). It isn’t a matter of trying to time the market so much as timing your opponents and hoping to get lucky.

There is quite a lot of luck in play here. Not just the stock movement and events, but especially with Pan Am’s expansion. If you buy a very expensive jet plane to claim a 4-distance route, you are incredibly unlikely to get a return on that money. Unless, of course, Pan Am buys that route and immediately pays you a huge sum (it’s 14 dollars… but trust me, it feels like a million). Best yet, when that happens your jet is available again to claim another route. A lot of success, or lack thereof, can hinge upon the Pan Am symbol being rolled during the expansion step. It’s a bit of risk/reward but the outcome is certainly up to the aviation gods.

Pan Am is a fun enough experience and slots perfectly into the “next step” weight of games that you might want to introduce to someone if they want something more than, say, Ticket to Ride, has to offer. There is a bit more randomness than I initially expected, but I don’t think it’s necessarily bad. It plays in less than an hour and there are some interesting decisions to make throughout.

That said, I don’t see a huge amount of depth here. Your experience on the fifth, tenth, or hundredth play is going to be fairly similar to the first. Claim as many routes as you possibly can and hope to sell them off. The stock system is a little flatter than I’d prefer, more variability would be welcome. But as is, Pan Am is a good light economic game.

Final Score: 3.5 Stars – A fun lightweight mix of worker placement and bidding in a beautiful-looking game.

Hits:
• Bidding for worker placement spots adds a lot of interesting decisions.
• Great production with cool model planes all over the map.

Misses:
• Stocks-as-points just feel a bit boring and the market isn’t very dynamic.
• Resolution of action spaces is largely anticlimactic, all the fun is placing the workers.