We review Palette Swap, a color matching abstract strategy game published by New Experience Workshop. In Palette Swap, players are trying to be the first to complete all six of their cards by mixing and swapping colors with other players. 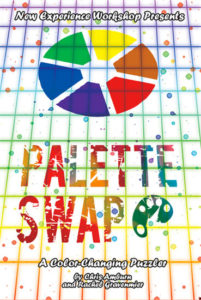 Palette Swap caught my eye while I was waiting to demo an entirely different game from New Experience Workshop at PAX Unplugged last year – the white, geometric themed box stood out amid the bolder artwork, and the combo of art and logic game was an immediate draw. I’ve yet to find a “minutes to learn – years to master” type game that I didn’t love.

Palette Swap is an abstract logic game for 1-4 people that takes about 30 mins to play. The sweet spot for this game is 2-3 players.

My first time playing this game was in the tiny space behind a vendor booth at PAX, the din of the crowd muffled by a curtain on my left side and a panoramic of the Philly skyline visible through the enormous window on my right. Chris Amburn (one of the game’s designers) popped open the box and started explaining rules staccato style while I was a little blinded by the light bouncing off the translucent colored cubes.

Palette Swap is color-wheel themed, but the palettes themselves are boldly geometric and you almost get the impression that this is what you’d get if you asked a computer to design an art game. And I totally dig that – this game is the polar opposite of more abstract, artwork-centric games.

On my second playthrough I noticed that the rulebook is a little disorganized, but a set of cards you keep near the colors help keep the basic mechanics in mind. The rulebook is also super short, and while that means it usually only takes a few minutes to introduce a new player and get started, unfortunately a few things (like ties) aren’t addressed at all.

While the game spread is somewhat small and easily fits on a restaurant tabletop, it’s where I frequently play two player games. However I’d prefer the card to be a bit larger, mostly because they’re somewhat info-dense and this would be a struggle for friends with vision difficulties to play. Additionally, with no symbology representing the colors, this wouldn’t make it off the game shelf if I was playing with any of my colorblind friends.

There is also a children’s variant that doesn’t change the rules so much that it makes it a different game. Since there is little reading in the game (none required at all once you understand the swapping mechanic) this game has potential for those raising young gamers.

Palette Swap is small but somewhat denser than you’d think given its artsy theme. You’ll spend each round planning a step or two ahead, only to have an opponent’s move completely wreck your best laid plans. Much fist shaking ensues when we pull this game out.

Rules are short, and it’s relatively compact (both in physical size, as well as set up) so this make a nice travel game for waiting at restaurants (pro top: keep the colored squares in the box – I might not be welcome anymore at our local taco stand after a sudden component cascade…)

Misses:
• Can get confusing and run long with more than two players
• The rulebook could use a few tweaks
• Not good for anyone with vision issues