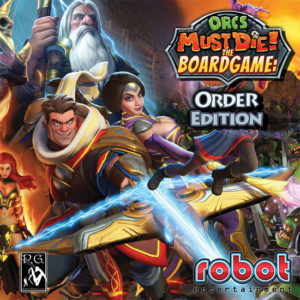 If you are even a casual video gamer, then chances are you’ve heard of the Orcs Must Die! video game series. If you aren’t familiar with it, Orcs Must Die! is an action tower defense style video game where players are trying to defend a rift from an onslaught of orcs. Heroes, gratuitous use of traps, lots of combat, and even a bit of humor define this series, now in its third iteration.

Flash back to 2015, veteran game designer Sandy Petersen (Cthulhu Wars, Call of Cthulhu RPG) decided to take a stab at bringing this popular video game to our tabletop. Petersen Game’s successful Kickstarter campaign funded to over 1,500 loyal backers and arrived in backers hands near the end of 2016. We’ve take Orcs Must Die! The Board Game out for a spin and we’re ready to let you know if it holds up to the fun of the video game.

There are actually two different versions of Orcs Must Die! The Board Game, Unchained and The Order. For this review, we’ll be going over (and using pictures from) The Order version of the game. However game play between the two versions is mostly identical, other than components. Owning both versions will allow you to play rivalry mode (more on that later).

In Orcs Must Die!: The Order – The Board Game (hereto referred to as simply Orcs Must Die for brevity’s sake) players must work together to defend the rift tile from increasingly larger waves of enemies.

Each round, players will be laying traps, purchasing gear, fighting hordes of orcs and other monsters, all while trying to keep their head above water. The game is played over nine rounds, and if at the end the invasion, the rift is still standing, players win!

If you’ve spent any time with a Petersen Games product, you know they like to put out quality games. Their first offering, Cthulhu Wars (reviewed here), was one of the best looking board games put out that year. So I had high hopes with Orcs Must Die.

And for the most part, Petersen Games didn’t disappoint. The main attraction for Orcs Must Die are the miniatures. The game comes with 50+ miniatures (4 heroes and lots of minions) in a variety of sculpts that match their video game counter parts.

In regards to the minis, Peteresen Games did something really good and really odd. For the good, most of the minis come in a plastic tray that keeps them secure. In an amazing stroke of inspiration, they also included a handy visual aid to easily put each minion back in it’s proper place (you hear that CMON Games? Take note!).

On the other hand, some minions were also just loose in an area in the bottom of the box. This caused two of my minis to arrive damaged. While I was able to glue them back together, I am guessing that this won’t be an isolated issue.

Moving on, the game also comes with 29 tiles (some with very humorous names), 4 decks of cards, custom dice and oversized player cards. Everything here was high quality and garnered no complaints from our team.

Finally, the game’s rulebook was thick and printed on a high quality stock. Unfortunately, it could definitely have used some refinement as there are quite a few issues and typos in it, more than once I had to hop online to figure out a rules question. I would expect an official FAQ/Errata from Petersen Games very soon.

There are two ways to play Orcs Must Die. Fully cooperative or verses (rivalry mode). We are going to focus on the fully cooperative version here and we’ll touch on rivalry mode later. This will be a high level overview of the game play, but if you want the full rules, you can download a PDF here.

After a map layout has been chosen and setup, each player picks a hero to control. Orcs Must Die takes place over 3 levels, each of which has 3 rounds. A round is broken down into the following 4 phases:

1. Hero Upgrade Phase:
During this phase, heroes can spend skulls (earned by killing minions) to heal, buy gear, weapons and traps. Gear purchased goes into specific slots on your hero card, while traps are placed on the tile your hero is standing on.

2. Minions Phase:
This phase has a few steps:

3. Hero Action Phase:
Each hero, in turn, takes as many actions as they want, but only each action once.

4. Upkeep Phase:
This is mostly a cleanup phase. If, during the upkeep phase, all the army cards for the level have been used, the next level is prepped (new army cards, better traps and gear in the shop, etc…)

Rounds continue in this manner until either the rift has been destroyed or the players have made it the end of level 3 and killed all the remaining minions.

The tower defense genre is one I really enjoy in video games. Perhaps it’s because I have fun building up defenses to test out against an invading army. While I’ve played a handful of tower defense style board games in the past, none have really sucked me in as much as I had hoped. Until now.

I really enjoyed Orcs Must Die: The Board Game. While the rulebook is thick and occasionally missing info, the actual game play flows really well once you get going. The game isn’t complicated at all, but the issues with the rulebook do hamper getting going a little bit. However, if you can get one player who knows the game well to teach, players can be up and running in no time.

Once you get the flow of the game down, you can have a lot of fun with Orcs Must Die. This is especially true once you are in the third level. By then, you’ll have some solid traps down, have upgraded your hero, and there will be hordes of minions to cut a swath of destruction through. There is nothing more satisfying than seeing a tiled crammed to the limit with minions, only to unleash your ultimate and lay waste to all of them.

Moving on, I will say there can be quite a bit of randomness in Orcs Must Die. The combat, handled via dice rolling, of course will have the usual chance based outcomes. Yet I do like how players can combine like symbols when rolling to make a wild. This allows attackers who roll useless symbols to still get some mileage out of their attacks.

The only area where the randomness could be problematic was with the monster spawns. Some will have you spawning a just a handful of lesser minions, while others will have you spawning gobs of minions and even a greater one. There isn’t any scaling here (other than at player count), so an unlucky pull can definitely set you back and feel unfair.

Aside from the randomness of the minion armies, I found Orcs Must Die to be a really strategic game. Players need to strike a careful balance of upgrading their heroes with gear and laying quality traps. I actually found that I tend to lean more on the traps in my games. Since the traps aren’t dice based, there is less chance of a miss (and no risk of hero damage). Having powerful traps can really turn the tide of a game.

If you have both a copy of the Unchained and Order edition of the game you can forgo the cooperative play for rivalry mode. In this mode, players split into two teams and face each other, trying to destroy your opponent’s rift. Your heroes and minions will attack the other players heroes and minions.

While rivalry mode was fun, I still prefer the fully cooperative mode. Rivalry mode basically doubles the setup time of the base game, takes a lot more table space and is an overall longer game. I didn’t find I was having that much more fun with rivalry mode to justify all the extra legwork. Cooperative mode was a blast and required half the work (and investment). Yet I know there are players out there that have no interest in cooperative games, so this is absolutely a solution that would work well for them.

Finally, let’s talk about the difficulty. Orcs Must Die has quite a few options to scale the difficulty level. Starting with the map selection, the difficulty scales up quickly from beginner maps to hell. I’ve won maps on the beginner level, but that’s about it.

If that challenge isn’t enough, players can toss in Boss (if they buy a boss pack, or heroes can be used as bosses with both versions of the game). So between all these ways to kick up the difficulty (and the game can get HARD), I don’t think I need the added challenge of rivalry mode.

This is the 3rd game I’ve reviewed from Petersen Games. I had a love affair with Cthulhu Wars (which will only get better once I get my hands on the expansions), and Theomachy just wasn’t for me. However Orcs Must Die! – The Board Game is definitely staying in my gaming collection.

I’ve played it quite a few times already and just writing this review has me itching to get the game back to the table again. In fact, I enjoyed my copy of the base game so much, I already went online and bought the hero and minion packs for some added variety.

So, while Orcs Must Die: The Board Game isn’t perfect, it’s absolutely replaced any other tower defense game in my collection (so long B-Sieged). Once you get past the learning game of Orcs Must Die: The Board Game, gamers are rewarded with a fun and challenging tower defense style board game. Whether or not you need both versions of the game depends on how attracted you are to playing versus instead of fully cooperative. But in either case, this one is definitely worth a look.

If you’d like to pick up a copy of the Orcs Must Die! Board Game, you can get it for about $79.

Final Score: 4 Stars – A great cooperative board game that brings the tower defense style game to our tabletops.

Misses:
• Rulebook could use better editing
• Minion spawning can feel random at times 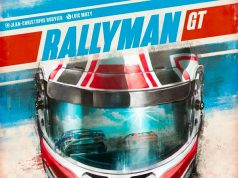 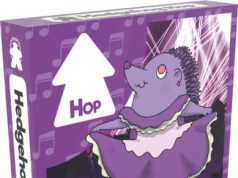