Home Game Reviews Not Alone and Not Alone: Sanctuary Review
Review of: Not Alone

We review Not Alone and its Sanctuary expansion, published by Geek Attitude Games. In Not Alone, one play is the creature trying to assimilate the planet, with the others are trying to survive. 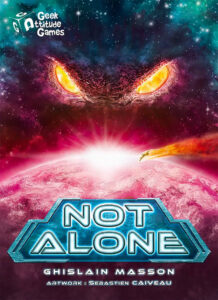 Sometimes space-faring just doesn’t go well. Today is one of those days. You’ve crash landed on a mysterious planet and must survive until your rescue arrives. But there is a creature on this planet that doesn’t necessarily take kindly to visitors and will attempt to hunt you down and assimilate you into the planet itself.

Here’s the kicker though… one of you is playing as the creature. Not Alone is an asymmetric one-versus-all affair that will have you trying to outsmart your fellow players. We are also going to look at the newest expansion, Sanctuary, and talk about what it adds to the game.

Generally, the experience of Not Alone is quite simple. The human players will secretly choose a location on the planet to visit. The creature will then choose a location where they are going to go. Then the humans reveal their choices. If the creature chose the location they did, they lose a will counter and the planet moves closer to assimilating them. All players start with locations 1-5 in their hand, but can eventually find five additional locations with other powers.

Any human who didn’t go to the location where the creature is can use that location’s ability. These will allow you move the rescue counter forward, finding new locations you can visit, regain will, or draw survival cards that give you more special abilities.

Of course, there is a bit more going on. The creature has hunt cards they can play, which may let them target additional locations or provide other useful actions. The players can use survival cards and one of the locations, The Lair, will let them take the effect of the card where the creature goes. If a player runs out of will, the assimilation counter moves an additional space. And the hunted players’ cards don’t go back to their hand automatically so your choices of where to visit will quickly dwindle. Some locations will replenish your cards. Otherwise, you’ll have to give up will to get them back.

Play continues until either the planet’s assimilation marker reaches the goal or the player’s rescue marker does.

The Sanctuary expansion adds another way for the players to win, essentially allowing them to fortify in a defensible position. If playing with Sanctuary you will use the same starting locations (1-5) but the other locations are different and provide new actions. There is also a Sanctuary marker that starts on a random location and will move throughout the game.

When a player chooses to visit the location with the Sanctuary (and aren’t stopped by the creature) they can advance the defense counter rather than taking the action. There are also survivors near the Sanctuary that can be rescued, granting a reward. If you deliver the survivors back to the Sanctuary you’ll increase its defenses more quickly.

But it isn’t just good stuff for the hunted players in here. The creature can now evolve and gain new traits to help deal with the hunted player’s new fortifications. At the end of each round, the creature gets a DNA token and then can spend DNA tokens to draw or play evolution cards.

One versus all games just normally aren’t my cup of tea. It always feels like the “one” in that equation drew the short straw and has to run the game for everyone else. But that doesn’t really feel like the case with Not Alone. It’s more like everyone wants to be the creature to try to take on all of their friends at once.

That isn’t to say the role of hunted players is boring either. Players are allowed to openly communicate and discuss with the other hunted on where they should do. Of course, it has to happen out loud in front of the creature so it creates an environment for plenty of innuendos, jukes, and doublethink.

The gameplay itself is simple and lightweight. The rulebook can be a bit convoluted but it really boils down to try to go where the creature isn’t. And the Lair location is vital to the success of the whole game as you can try to get the creature to think you are going to the Wreck only to bait them into putting the creature there so you can activate it anyway, from the Lair. Essentially, players can never be completely shut out of a location’s action if they are creative enough. This can make playing the creature feel somewhat less rewarding as you often feel like you are just randomly shooting arrows into the dark.

Unless, of course, the creature has a hunt card that will allow them to block multiple places. There is a huge deck full of special abilities and actions that it’s really impossible to account for all of them. At the end of the day, playing Not Alone isn’t necessarily super strategic but it is fun and full of tense moments and anxious reveals.

Another positive is that Not Alone plays from 2-7 players. While the two-player game is lackluster, anything with three or more seems to work pretty well. As the number of players increases so does the likelihood of the creature catching folks, making it harder for the hunted players to win. This is where the Sanctuary expansion really shines.

While Sanctuary gives both sides some new things to do, it is weighted pretty heavily against the creature. The experiences are different enough that that game is enjoyable with or without Sanctuary, but if you play with a large number of players often it might be something you should add sooner rather than later. Otherwise, the Sanctuary expansion is just a bit more meat on the bones of an already good game. It can make for a few more strategic decisions for players as they have to really decide which victory condition is their most likely path to victory.

For a game with asymmetrical teams, a ton of different special ability cards, and a wide player count, Not Alone seems to come down to the final turn to see who wins an inordinate amount. It’s those moments where all players are secretly choosing their location and the creature is trying to assimilate one final time that pays off the entire 45-minute experience.

Sanctuary adds more special powers and another way for the hunted players to win. While Not Alone is great without the expansion, if you play with a lot of players often I think it’s a good addition.

Hits:
• Plays well at 3-7 players
• Makes for really stressful and exciting card reveals
• Sanctuary gives more for the players to do and consider throughout

Misses:
• Sometimes feels a bit random, especially as the creature
• Rulebook was hard to parse in places 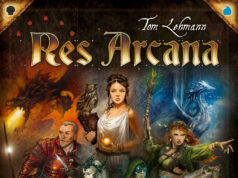