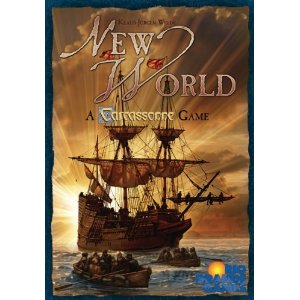 The first game on my long road to 101 games is: New World: A Carcassonne Game. With nothing to do on Wednesday night, Heather suggested we play a game. So after much deliberation, we pulled this one off the shelf. Both of us are Carcassonne veterans, but never tried this edition. If you’ve never played Carcassonne, it’s a pretty easy game. The basic rules are, you draw a tile and play it connecting to the rest of the tiles. So the area you play on is ever growing. You can choose to claim cites, road and farms with your little “meeples,” scoring points when they are completed. A fairly easy mechanic that is easy to teach to new players.

What is different in this edition vs “vanilla” Carcassonne is a few thematic changes (name changes) and the inclusion of 2 surveyors. The surveyors move across your playing field every time some scores. Any meeple they move past is removed. It adds another level of complexity and urgency to the game that I found interesting. No longer can you just sit and build that giant city. If the surveyor passes you buy, the city is vacated. Someone can later claim that empty city with a new tiles, as long as it’s completed before the surveyor moves again.

If fact, that’s how my sneaky wife won the game. I was lacking only 1 piece to finish a large city and got bumped by the moving surveyor. A while later she happened to draw the right piece and was able to swing in and snatch it up. It was a sizable point swing and ended up being the difference in the game.

So there you have it. A classic tile laying game with a bit of a twist. I’d did enjoy it, even though I’m starting off my Board Game Quest with a 1 in the loss column. (thanks babe). I’d go so far as to say that I like the new mechanic and might actually prefer this version over normal Carcassonne.

If you are interested in getting a copy for yourself, it’s about $22. Not a bad price for a game that easy to teach and a quick play.

Final Score: 3 Stars – A better twist on a classic game.

Hits:
• Easy to learn rules
• A good variation of the traditional Carcassonne
• Quick game play
• Same good quality components you are used to with Carcassonne