We channel our inner Cthulhu as we review Necronomicards, a card game where players are trying to summon an ancient elder god. Is it a book of fun or does it anger the mighty Cthulhu? 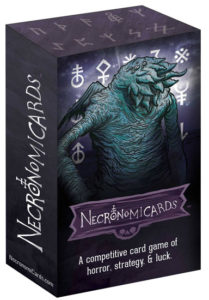 I have slept for eons. Ages of what the mortals known as “time” pass as the dark energies of the universe have circulated around my sleeping body. Now I am summoned once again. I arrived at a small structure on this planet I shall devour, but my powers are limited. A strange occurrence of mortal children of shugg laying cards with my ancient scripture lies before me. They tell me in their crude tongue it is a game, a test of skill. I, the great and ancient Cthulhu, have been awoken from my great slumber by something called Necronomicards.

Necronomicards, they tell me, is a card game of symbol matching for 2 – 4 humans that takes about 45 human minutes to play. They tell me it plays best with three humans.

Necronomicards is a play on words in the human tongue, derived from the title they have given to my scripture of summoning, the Necronomicon. In this game, humans will try to match ancient symbols to create sets which will allow them to play summon cards. When a human plays a seventh summon card, they win the game.

These human sized cards are small compared to my enormousness. However, they appear to be larger than other cards described to me as normal sized playing cards. This makes it difficult for the humans to hold many in their puny hands at the same “time”. They also seem to be flipping through the cards often to look at all the symbols of my ancient language. If the human who had designed this game had laid out the symbols on the left side of the cards, they would be easier to see when humans splay the cards in their hands. Overall the humans tell me the card quality is good for mortal cards.

The summon cards bear the likeness of various demons, some I have seen, some I have not. Each human turn, the player holding a summon card may play one. This could have what they described as very drastic consequences although the only thing I saw was one human losing some turns of playing cards. At another “time”, a human was forced to get rid of spell cards.

My torment of boredom at watching this ended when one human played a seventh summon card and claimed victory. Strangely, this also awoke Nyarlathotep. It was good to see the chaos once again. We talked shop about our slumber in the void before he devoured his summoner. He took off to destroy a few civilizations in another galaxy that worshipped him in the past. Jerk.

The humans tell me that this game wasn’t very challenging except for matching symbols. This must be difficult for some humans, but really it appeared quite boring. Each turn the humans seemed to be flipping through cards often just to remember which symbols they had. Every turn was just a draw and then flip through cards. It was interminable. I can’t believe THIS is the game I was summoned by. Other civilizations used to play physical sports of sacrifice and bloodletting to attempt to summon ME!

The humans said this was just a game to play while waiting to play other games. They said that usually a game that makes people lose turns isn’t that great but because the game was so short it was ok. I am still at a loss to see how this experience brings any joy to humans. They may feel some pride at finding symbol matches but there was hardly any strategy and lots of luck in the game. Maybe Nyarlathotep would like it being the embodiment of chaos. Jerk.

The only thing interesting I saw in this game was the art. The human called Andy Hunt must think he’s a capable artist if he can capture the full magnificence of Cthulhu! He can’t even see into the 4th dimension! I guess by human standards he has some creativity.

If you wish to summon dread gods and demons, play this game. If you value your mortal lives, or even more, your precious “time”, do not play this game. I recommend ritual sacrifice instead. It serves the same purpose quicker.

If this sounds like a game that you would enjoy, you can pick it up for $25.

Final Score: 1.5 Stars – Andy Hunt’s art is the only thing which stops me from devouring him immediately for designing this game.