Home Game Reviews Near and Far Review
Review of: Near And Far

We review Near and Far, a story telling and resource management board game published by Red Raven Games. Near And Far is a follow up to Red Raven's popular Above and Below board game and we let you know how good it is. 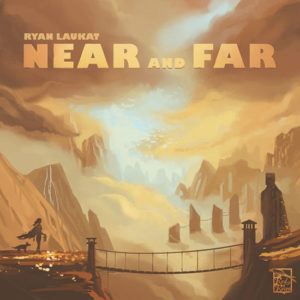 Artist, designer and publisher Ryan Laukat’s success with blending the storytelling + resource management in Above and Below has the potential to be duplicated in a new sequel. Near and Far is a storytelling and resource management game in the same thematic world as his previous game. Players occupy the role of adventurers forming a party of heroes, journeying through the landscape completing tasks for fame and fortune. While there are a lot of activities in the game, the player who utilizes the presented opportunities best to gain victory (journey) points will ultimately win.

Near and Far requires 2-4 players. While it plays best with 3 players, it offers a little more openness in play at 2. For a single game, it takes about 30 minutes per player. However, to get the best experience, multiple games should be played in one of the game’s overarching story modes.

On one side of the coin, Near and Far is a game about equipping an adventuring party by visiting various buildings in town. On the other side, players make choices about which locations outside of town to visit and, possibly, have adventures requiring heroic choices. The results of these and the placement of camps deliver journey points, the victory currency of the game.

On every turn, players choose whether to utilize options in town or to continue a journey out on the map. When players visit sites, they can place a camp to claim the resources provided. This will either be coins, gems, or trade routes which generate points at the end game. As players place camps, they reveal bonuses from their player boards.

In addition, if a player stops on a location with a book icon, the indicated adventure is read from the Adventure Book which presents a light roleplaying encounter to the active player. This usually involves a player making a roll against their “skill” or “combat” score to determine success with the hopes of gaining resources and reputation.

If players elect to stay in town, usually this involves doing something to outfit the adventuring party or finding new comrades to join the party, thus increasing the party’s stats. Players can also hire pack birds or turtles to schlep stuff around, thereby allowing them to gain treasures. Finally, players can take actions to improve their reputation or gain different types of resources through mining, farming, or trading.

Ultimately, a variety of sources deliver journey points in Near and Far. Placing camps on the map, defeating bandits on a journey, acquiring reputation from paying money and encounters, and acquiring artifacts by paying resources all gain players points. Whatever the source, the player with the most at the end wins.

Just as Dungeons & Dragons derives success from the ground level view of an adventuring group, so does Near and Far benefit from zooming out one level. It simulates an entire adventuring campaign in one game, offering glimpses of the same types of management decisions while offering a paucity of the personal roleplaying decisions.

In a two player game, only seven adventures are placed on the map, resulting in roughly 3 per player per game. This results in, much like Above and Below, a management game with some storytelling thrown in. With more players, one player could monopolize these roleplaying opportunities, so there is some competition there.

Depending on how gamers approach Near and Far, this amount of storytelling could be just enough, or not nearly enough. The game offers four play modes. Players can just play the introductory or random map as a one-off evening affair. There’s also an option for “Arcade Mode” where the stories are replaced with simple decisions and resulting bonuses. However, by far the most enjoyable way to play is with “Campaign Mode” or “Character Mode”.

This version of the game has players using a character sheet and keeping track of advancements. Meanwhile, the map flipbook is played sequentially with some contiguous side quests (Campaign Mode) or encounters selected from personal stories (Character Mode).

The primary negative here is that the resource/time management game doesn’t change much. If players are the type to get excited about the “head back to town” part of any D&D adventure, then the management side of the game will be enjoyable. However, it often feels like a time suck that forces players to use up actions to resupply.

This is the true crux of the challenge in Near and Far: how effectively can a player use an adventuring party’s time and resources to master the game’s victory systems without wasting too much time or camp tokens in town. On this level, the game feels very repetitive from play to play.

To truly enjoy Near and Far, players will need to forgive the gaminess of the management presented. It’s not exceptionally challenging as a game, and often the same choices are selected in the same sequence from play to play: hire adventurers, a small journey for money, hire more adventurers, a small journey for money, etc. This isn’t a huge letdown, but the lackluster nature of the decisions is, unfortunately, part of the package.

This is also the case when it comes to player interaction. Near and Far tells personal stories, and as such, there’s not much that players will do with each other. Even the duels in town that occur when one player wishes to visit a location occupied by another are not really filled with drama. The real element of tension between players mostly comes from competition over limited game resources.

The real highlights of the game come with revealing new content with each play. Flipping a page to a new map or hearing a new story drives much of the game’s engagement, even if the results of encounter choices or places on the map feel like just reconfigurations. If players go into each session with this in mind, Near and Far definitely delivers.

In Near and Far, gamers looking for a strong storytelling element will find it here, but must also wade through repetitive games of management of resources. The differences between plays are highlighted mostly in the stories and rarely in other game content. While it’s gorgeous and offers excitement with hearing a new adventure, Near and Far also somewhat disappoints on a mechanical level.

Final Score: 3.5 Stars – A game around heading back to town to gear up doesn’t offer much, play that drives towards the very interesting stories keeps players rewarded.