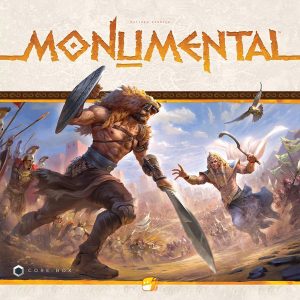 I’m always on the hunt for a new civilization-building game. Ever since I played my first game of Sid Meier’s Civilization back in the early 90’s, I was hooked. Thankfully, there are no shortage of civ building games to choose from for a game night. They range from quick dice rolling fairs like Nations: The Dice Game to more abstract ones like Tapestry to grandiose ones like Through the Ages. In either case, they all try and let you take a nation from antiquity to the modern ages in their own unique way.

Today, we are going to look at game designer Matthew Dunstan’s take on the civ building genre with Monumental. Published by Funforge, this hybrid deck builder and civ game will have players controlling one of 5 different civ as they try and build an empire to stand the test of time.

Once the somewhat lengthy setup process is completed, each player alternates taking turns until the end of the game. A player’s turn starts with them activating one row and column in their city—which is made up of 9 cards in a 3×3 grid. Each card activated will provide the player with a resource and sometimes a special ability.

There are three types of resources in the game, Science, Military, and Production that must be used on the turn they are earned. Production will let you buy buildings from the market to add to your deck, while Science does the same, but for science cards. Science cards are unique in that they are played in under a building card, giving you an extra card activated that round. Any purchased cards go ON TOP of your draw deck, so you’ll have access to them immediately next round.

Military is used to do pretty much anything on the board. The main thing is to move your army and warlord units. To attack a province, you have to move enough units equal to the defense value of the tile (terrain value + the number of units or the number on the barbarian token if it’s a neutral tile). One military point will move one unit. There are no dice to roll, as long as you bring enough units, you can conquer a territory.

Players can also earn Gold and Culture in various ways, usually from barbarian tokens or the special abilities of cards. Gold acts as a wild of the three main resources and can be kept from round to round. Culture is used to play your civ’s culture cards, which give you unique powers that break the rules in various ways.

Once you are done taking actions, your turn ends, the market refreshes, and the cards you activated this round in your city are moved to the discard pile, with replacements drawn from your deck.

Publisher Funforge did an excellent job with the production values in Monumental. They sent us the deluxe edition to review and I was quite impressed. The miniatures are excellent and look really good on the board (even if they can be crowded at times). Whether or not you need the version with minis depends on your preference, as they probably aren’t completely required, personally I’m a fan of them though.

For the gameplay, I really enjoyed the deck building mechanic in the game. I thought having a city of 3×3 cards opened up a lot of strategic options for what you are going to do on your turn. And since new cards you buy go right on top of your deck, you can even plan ahead for future turns. Rarely did I feel like I was a slave to luck in the game, as there is a good amount of player agency.

What is also interesting about the deck building is that the things you really want to build rarely provide victory points. Most of the buildings upgrade your engine: more resources and great special abilities, yet those cards don’t actually provide any victory points. So players have to balance building their engine with buying cards that are going to ultimately score you points. That being said, science and wonders definitely do a lot to help a player so it’s not quite like the useless VP cards in games like Dominion.

In general, I found the Monumental was fairly easy to learn. The action system is pretty streamlined and you can explain the game in a short amount of time. Deal out your grid, choose a row and column, collect your resources, spend them, boom, done! Once you’ve played a game, you can easily teach it with minimal need to reference the rulebook.

Monumental also has a solid amount of replay value. There are a ton of different ways to set up the map, with even the option for a random assortment of tiles. And each civ, while having similar cards, also has a handful of unique cards, making them feel just a little bit different from each other. I feel like it was balanced just right where each civ has its own leanings, but not so unique to feel unbalanced at times.

My biggest knock against Monumental is probably with the player scaling. While the game plays fine from 2-3 players, the downtime gets worse and worse as you go up in player count. For the most part, I don’t ever want to play it with four players. I think 2-3 is the sweet spot and the game actually has pretty solid 2 players variant rules.

Finally, Monumental also comes with a heroes and monsters expansion that adds even more to the replay value. Heroes are cards that hang out by the market and can be bought and used for a quick bonus before returning. They are almost like mercenaries that can be recruited over and over. The monsters added a bit of variability to the barbarian tokens where, instead of being just a flat reward, spawn monsters on the board who must be dealt with by any player and are a nuisance until killed. They also provide a reward for when slain.

I enjoyed Monumental a lot and have gone back for quite a few plays. I really liked the deck building mechanic and bought that the grid system was an inspired mechanic. Monumental has players making a ton of decisions during the game, yet I also never felt like the luck of the draw screwed me over—which can definitely happen in deck builders. I think Monumental is probably at its best at 2-3 players though, so beware if your main game group is 4 players. Regardless, if you are keeping your eye out for a unique civ building game with buckets of replay value, Monumental certainly fits the bill.

Final Score: 4.5 stars – A unique civ builder that’s a great mashup of a deck builder and the civ building genre.

Misses:
• Downtime can be a bit much at 4 players
• Setup is a tad lengthy 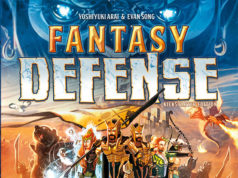