We review Monster Chase, a memory matching board game published by Iello and Scorpion Masqué. Monster Chase is a kids game that will have you matching cards to scare off monsters back to the closet. 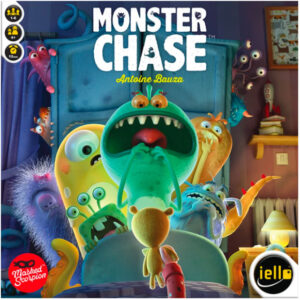 Anyone who has kids of a certain age knows that bedtime can be, how shall we say, trying. I mean it’s my favorite part of the night. Those trying times get drawn out when fears of monsters under the bed or in the closet appear. We make them feel safe and get them back to bed. We might even imbue them with powers to scare those monsters away with their favorite stuffie or monster-proof their pajamas.

Ever since I started writing here at Board Game Quest, I’ve had in the back of my mind the desire to write a few reviews for games that are not new, but my family and I have played here so many times that I feel like others should know about them. Monster Chase, designed by Antoine Bauza and published by Scorpion Masqué, takes the theme of monsters coming out at night and it’s your job to scare them back into the closet. It plays one to six players ages 4+ and takes around 20 minutes to play.

Monster Chase is a memory and matching game at its heart. Depending on the length of the game that’s desired, a deck will be created with anywhere from ten to twenty cards. This will represent the number of monsters that will need to be scared away in order to win the game. How does this happen?

On every card are a monster and a toy. This toy is the object that scares the monster back into the closet. Over the course of the game, everyone will have an opportunity each round to flip over a tile and see if it matches the toy of the current monster. If it does, the monster is returned to the closet. If not, there will be three chances to find the match. If a match is not found, a new monster appears. There can be a total of four monsters out, and if at any point a fifth monster needs to come out or players are unable to make a match once the deck runs out, their bedtime is disrupted and the game is lost.

The game also includes some play variations, including adding some components to increase the difficulty, and depending on the age of your kids and the experience you’re hoping for, these might never come out and for the purposes of this review, I’ll be focusing on the main way the game is played.

This is one of my kids’ favorite games. They let their imaginations run with them, so much so that they start naming the kids and monsters on the cards. They especially get into the part where, upon matching, players are encouraged to yell “go back to the closet monster!”. Seriously, this is in the rules and they love it.

As a parent, this game ticks a lot of boxes for me. It takes a fundamental early childhood game mechanic of matching and pairs it with a theme that kids who know Monsters Inc. will find familiar and engaging. Because this game involves matching and not a lot else that kids will need to focus on, the rules make it accessible for even younger kids. I think the game could feasibly be played with a child as young as four. Parents will mostly be the ones tracking how many guesses have happened before another monster comes out, but kids will still have a visual reminder of how many chances they have, as the game includes a three-tile monster that is flipped over after each incorrect guess to indicate that mistake.

The artwork is also really cute. I know there’s a few versions of this game available so I’m specifically referencing the one published by Iello. The monsters aren’t scary and are very age-appropriate. They are colorful and visually interesting. Don’t be surprised when your kids pick up the cards and embody a voice or get silly with them; that’s usually a sign they’re really into it. I even appreciated the touch of including a box insert that opens like a door, so you can literally put the monsters into a closet, further tying the theme to the game by including a practical way of cleaning up.

One last thing: there are a variety of ways to play the game. I really appreciate this flexibility, as it allows the game to scale really well for kids depending on their ages and abilities. Heck, you might even try some of these on your own, but speaking from experience, if you don’t really want to see how poor your short term memory has gotten in your older age, steer clear. Ok, just try it once if you’re as curious as I was.

If you’re looking for an accessible, fun, and engaging game for your younger kids, Monster Chase is one worth getting. There are a lot of memory-style games for kids out there. While I don’t know every single one of them and can compare them to this, Monster Chase for me is at the top. With the familiar theme of monsters under the bed, while empowering your kids to scare them away by remembering where toys are, they will ask to play this over and again.

Hits:
• Cute monster artwork
• Theme is familiar and tied in very well with the game
• Yelling is encouraged (this will really get the kids into the game)
• Memory mechanic is very child accessible
• Multiple ways to play in terms of length and difficulty

Misses:
• It reminds you as the adult how terrible your short term memory can be