We review Mistborn: House War, a new negotiation game published by Crafty Games. In Mistborn: House War players take on the role of one of the famed houses from Brandon Sanderson's Mistborn Series and attempt to save or dissolve the empire. 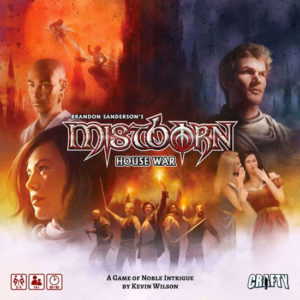 Brandon Sanderson is one of the more prolific and creative fantasy writers today, developing fantastic worlds that dazzle the imagination and inspire the mind with epic tales of heroes & villains, honor & betrayal, and redemption & corruption. The first novel in what would be known as the Cosmere, a vast and sweeping epic spanning multiple worlds, is Mistborn: The Final Empire, in which magic is wielded by eating and digesting metals to unlock various powers.

In the saga, factions vie for supremacy as the fate of an empire stands in the balance, with betrayal, intrigue, and violence all serving as tools for victory. In Mistborn: House War, you take on the role of one of the great houses hoping to end up in the seat of power. Will you bring glory to your house, or will you end up forgotten and defeated? Read on to find out.

In Mistborn: House War, each player takes on the role of a faction seeking power in the Final Empire. On a player’s turn, they collect the resources (money, military, metal, cards, etc.) allocated to them depending on their faction. The active player then advances problem cards on a countdown track, with problems reaching the end of the track triggering their effects, then adds a new problem to the countdown track.

At this point, a player has two options: pass or deal. If a player passes, they receive a free resource of their choice and their turn ends. If they decide to deal, they choose a problem card to attempt to solve by paying the required number and type of resources for solving. At this point, negotiation is opened between the active player and the rest of the players to gain resources needed for solving and to prevent players from interfering.

Negotiation can take the form of trading resources for victory points, a promise of future actions or inactions, or practically anything else that can be imagined. Negotiations, once completed, are binding to the end of that turn only. When the problem is solved, players earn victory points based on the card and the terms of the deal reached.

As the game progresses, a counter monitoring the unrest in the empire is moved along a tracker. If the game ends with unrest under a certain threshold, the Empire is saved and the player with the highest number of points wins. However, if the game ends with unrest over the barrier, the Empire falls and the player with the lowest number of points is declared the victor.

Since the path to victory in Mistborn: House War is a negotiation, it is unsurprising that there is a strong, but not an overly rigid framework for how negotiations run. It is a smart choice by the designers to provide a limited set of rules for negotiating the exchange of resources and deals to solve problems, as it can provide crafty players with the latitude to come up with some creative terms. Especially satisfying is the rule that agreed-upon deals made are binding until the end of that turn, preventing sneaky players from immediately backing out of their deals. Without this framework in place, this game would be a prime title to lose friends to while playing.

The game adds a layer of strategy through the movement of the problem cards on the game board. Because the active player gets to decide how and if the effects of problem cards trigger, it adds an interesting twist to the flow of Mistborn: House War. Deciding whether to trigger or to solve a problem is a choice that could have longer-term effects beyond an individual turn, and it provides some excitement compared to what is implemented as a simpler mechanic in other titles.

Our main issue with Mistborn: House War is with the problem of repetition. For our plays, the game seemed to get caught in a cycle and became a bit redundant as gameplay progressed. This very well could be an issue with the group of players, and not with the game itself. If the players do not really throw themselves into the dealmaking and negotiation, the game becomes severely lacking, as the resource management mechanics are pretty thin. The main cycle of “collect resources, solve a problem, score points” fell pretty flat to our group without the strength of the negotiation gameplay to prop up the game.

Another area where Mistborn: House War fell flat for us was in the theme. While reading the Mistborn books was not a barrier to entry to be able to play from a rules perspective, we felt a strong disconnect with the theme. Between the names and powers of the houses, the problem cards and the resources, a familiarity of the novels may lead to a more positive game experience – our plays were simply exercises in game mechanics rather than what could have been a very engaging and immersive experience.

Mistborn: House War is a good game for groups that enjoy the intrigue, deception, and dealings that go along with a solid negotiation game. Knowledge of the theme, while not required to play the game, goes a long way in making Mistborn: House War more enjoyable. Better mechanics might give this title more of a mainstream appeal.

Misses:
• Gameplay feels repetitive in the wrong type of way
• Needs a group of gamers who enjoy negotiation to shine.
• Knowledge of the IP is required for enjoyment and immersion