We review Master Word, a party-style guessing game published by Scorpion Masque. In Master Word, players are working together to guess the secret word in seven rounds 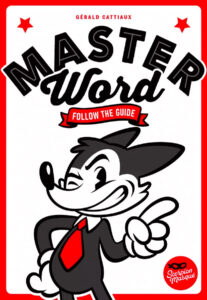 Word based party games these days feel like they are multiplying. Likely the massive success of Codenames has something to do with this. In the years since we’ve had endless Codenames varieties, Letter Jam, Decrypto, Werewords, Just One, and countless others. They seem to ride a fine line between the “party” game title and often become pretty cerebral exercises in trying to give the best clue or deduce something about your word.

Master Word is another entry from Scorpion Masque in this field. Definitely learning more toward the puzzle aspect and less a raucous party game. Let’s jump in and see how it works.

In Master Word, one player takes the role of the guide. They know a word or phrase and the other players are trying to deduce what it is but they only start the game by being given a category. For example, the category may be food, but only the guide knows the answer is lasagna.

The guessing players will work together to write down a number of clues to try to narrow down the answer. These can be single words or phrases to convey some kind of idea. When trying to figure out the food-related master word you might try things like “Chinese food,” “dessert,” or “contains fruit”. After all players have written a clue the guide will reveal how many clues in that round they believe are related to the master word. In our case of trying to get to lasagna—that would be zero!

Each round, not every player has to write a clue and clues can be repeated in future rounds, allowing players to deduce exactly which clues are correct. The guessing players have a maximum of seven rounds to try to guess the master word and only get three official guesses throughout the game. If the master word is ever written as a clue, the players lose!

Master Word feels like a lot of other activities fell into a blender. You have the pure logic test of Mastermind, the time passing activity of 20 Questions, and the social understanding of words that made Codenames into such a hit. But the end result is still just kind of a mess that comes with blending random things together.

I did have fun playing Master Word in smaller groups. As you reach the more difficult clues the game can become very challenging and rewarding when your team gets things right. It’s brain-burning at times which, if you are expecting some kind of fast-paced party game, might catch you off guard. But at times I felt like I was back in my college Symbolic Logic course trying to fit together all the “if, then, else’s.”

It seems best at four players where three clues are used each round. Although the box says you can play with up to six players, having five clues every round makes deducing which clues were actually right more difficult. So at higher player counts, you’ll have a lot of rounds where not every player is coming up with a clue.

Generally, that doesn’t bother me. The game is designed to be collaborative. It isn’t that each ‘guesser’ quietly comes up with their own clue, it’s meant to be discussed between them all to decide how to solve the puzzle. But with a lot of groups that can turn into an extreme form of quarterbacking that tends to happen in cooperative games. This is more of a problem with your group than the game, but it certainly shrinks the number of times I wanted to pull Master Word off the shelf. With groups of less extroverted gamers, it was better to find something where everyone must participate.

The guide’s role in Master Word is, however, mostly terrible. You aren’t really playing anything. There is one additional rule where once throughout the game you can put a token directly on a clue so the guessers know for sure which clue was correct. Other than that your only job is to let the guessers know how many clues are correct each round. Luckily the games are fairly short, maxing out around 15 minutes, so you can change roles fairly quickly.

There is nothing standout about Master Word in either a negative or positive sense. The clues have a huge range in difficulty and provide a scalable experience that you can tailor to your group. It’s best played at its lower player counts and taking the role of guide is kind of a bummer as you don’t really get to participate.

It’s hard to recommend Master Word for most groups, though. The collaborative nature of the guessing team really soured the experience for a lot of people I played with. They either felt like they had little input or they were writing the clue they wanted anyway and the rest of the team just had to deal with it. I’m not just sure making a logic puzzle into a cooperative experience is something that most people are going to enjoy.

Final Score: 2.5 Stars – A blended mix of lots of different parts of games that just fell short with most groups I played with.

Hits:
• A good mix of difficulty in the clues.
• Can be very rewarding when your team solves a puzzle correctly.

Misses:
• With lots of players not everyone will be adding a clue every round.
• Guide’s role is basically to not play the game.
• Requires careful coordination with guessing team to make sure everyone is giving input.