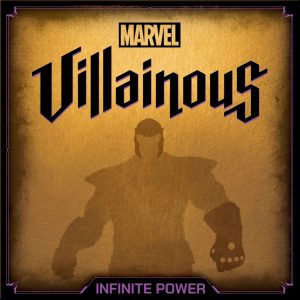 Since its release a couple of years ago, I’ve always been a big fan of the Villainous series. While I don’t usually gravitate toward “take that” games all that much, Villainous struck a night balance of thematic, asymmetrical gameplay that was never overly punishing. So I regally scooped up each expansion.

Which brings us to the latest in the Villainous series—Marvel Villainous: Infinite Power. Yes, this thematic game has finally left its Disney roots to move to the Marvel Universe. So grab your infinity stones as we take get ready to punish some heroic do-gooders.

For those who have played a Disney Villainous game, most of the gameplay is unchanged. You will still control a villain with their own asymmetrical goals and cards. If you want the full lowdown on the gameplay, pop over to my original Villainous review here for a quick refresher. But the short of it is that Marvel Villainous has 5 characters for you to choose from: Thanos, Hella, Taskmaster, Ultron, and Killmonger, each of which has their own power deck, domain, and win condition.

On a player’s turn, they will move their Villain to a new location in their realm and take any of the actions listed there. These might include gathering power, playing cards, moving allies, fighting heroes, drawing fate cards, or using items.

Where Marvel separates from Disney is how the fate decks work. Instead of each Villain having their own separate fate deck, all players draw from a shared one. It will be made up of some common cards (think the core Avengers) and also some villain specific ones. This means that Scott Lang from Taskmaster’s deck could show up and bother Ultron in his realm. The other thing of note is the game now includes event cards. There are both global ones and villain specific ones. Events will penalize players until they are defeated by sending over enough minion power. Once removed, every player that sent a minion there gets a small reward.

Other than that its the villainous gameplay you’ve come to know and love, but with, of course, some Marvel theming.

When it comes to my fandom, my love of the Marvel IP dwarfs my interest in Disney by a staggering amount. I’ve been really excited to check out Marvel Villainous from the moment it was announced. The plan was to dump Disney Villainous (sorry Scar) in the trade pile the moment I got enough of the Marvel version. However… I don’t think I’m going to do that anymore.

Before I go too deep down that rabbit hole let me assure you that Marvel Villainous is still Villainous at its heart, and it is a good game. However, I don’t think the changes they made were actually for the better.

Let’s start with the fate deck, arguably the biggest change to the system. On principle, it sounded like a good idea. Captain America will show up to mess with Ultron, Thanos, etc… there is always a lot of crossover from heroes in the comic books. So that makes sense. The bigger issue was with the events and the randomness that comes with only drawing one card.

In core Villainous, you’d draw two fate cards and pick the one that screwed with your opponent the best. Solid. With Marvel, you only draw one. And if you happen to draw an event that targeted yourself, it just gets discarded and nothing happens. Wasted action. There were times when I really needed to draw heroes to slow down my opponent and it took 5 turns for me to find one. I really disliked drawing only 1 card. The other side effect of the shared fate deck is a more watered-down experience. In Disney, the fate decks were tailored to each Villain and much better at slowing them down. They are much more random in this game.

But the bigger issue is with the player scaling of the events. I feel like Marvel Villainous just isn’t geared for 2 players. Events all have a power rating that minions need to beat to overcome it and that number doesn’t change based on player count. With 4 players, getting to 10 power on Avengers Assemble can be easy. But with only 2 it can take a while, especially if one player doesn’t really care about that event. In one game, it took almost half the game for me to get enough minions out to take down an event that my opponent was largely able to ignore. Not only am I wasting time sending minions there, but then I’m also not using them to work towards my goal.

As far as the five Villains go, the design team at Prospero Hall did do a good job in making them feel thematic. The star of the show is, of course, Thanos who actually has to send his minions into other people’s realms to steal infinity stones from them. This was a cool mechanic that really upped the player interaction. All-in-all each of the villains had thematic ties and I liked how different they played.

Finally, let’s talk about the production issues. Overall this feels like a downgrade from the Disney series. The movers are now plastic instead of resin, the power well feels cheaper, and even the cards feel flimsier. The bigger issue is the rulebook though. It really could have used another pass. We played our first game with Hella wrong because her win condition was poorly worded. And for Thanos, it never really says where his minions go when they invade another player’s realm. I feel like Marvel Villainous desperately needs an official FAQ.

I was prepared to go all in on Marvel Villainous. This was my theme for a game I was already loving. Unfortunately, the changes just weren’t for the better in my opinion. Marvel Villainous feels like a game that wants to be 3-4 players at a minimum. While the game does say that you can leave out the events if you want a simpler challenge, that feels like a wasted opportunity. They really should have been balanced for different amounts of players. Despite my issues, Marvel Villainous also isn’t a bad game by any stretch. The core of Villainous is still here and it’s a great system. I think this one could have just used a bit more time in Tony Starks’s lab.

Final Score: 3 Stars – While the core of Villainous is here and the Marvel theme is used to great effect, the changes didn’t really feel like an improvement.