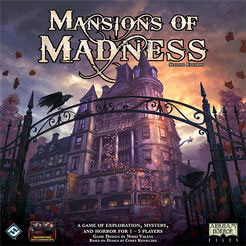 If you love stories dealing with the Cthulhu Mythos, puzzles, mystery, and a good old fashioned dungeon crawling experience, then look no further. Mansions of Madness 2nd edition is the game that checkmarks all of those boxes.

Mansions of Madness 2nd edition is an app-assisted board game for one to five players that takes two to three hours to complete. This is a unique dungeon crawling, horror-mystery experience that focuses on clue acquisition, puzzle completion, and sometimes combat against the monsters of the mythos.

In Mansions of Madness 2nd edition, you take the role of investigators entering different locations situated throughout the Cthulhu Mythos. At the start of the game, you will be given a brief overview by the digital companion app about your mission and enter your chosen scenario. In the beginning, you will not have the means to win, but upon furthering the story and finding relevant clues the path to victory will become clear.

One essential part of this game is the Mansions of Madness application (the app) for your phone, smart device, or computer. One of the downsides to this game is that using a phone will force one or more players to narrate and direct token and miniature placement during the game.

Each investigator specializes in different stats and abilities and will start the game with a set number of equipment, spells, and clue tokens. Fans of Fantasy Flight’s Arkham Files games will be seeing plenty of familiar faces.

A normal round starts with the investigator phase. Each investigator will have two actions from the list of; move, explore, search, interact, attack, or component actions. Most of your time will be spent moving, searching, and interacting with points of interest, which will allow you to further the story and eventually find a path to victory. All interactions and explorations are through the app, whether you are clicking on interact tokens or exploring new rooms, the app will tell you what you’re investigating or direct you what tiles and tokens to place in the gaming area.

While exploring and interacting, investigators will make checks with the special 8-sided dice provided with the game. Each test you make while exploring will require you to roll a certain number of successes with some tests being cumulative over each action towards it. By exploring and interacting with the map, investigators will find more clues, items, and evidence to help complete the scenario. Once all players have completed their chosen two actions the game moves to the Mythos phase.

The Mythos phase is where the game makes your life terrible. It will start with an event, generally focused on a certain room or investigator. Once that is complete it will possibly spawn monsters and cultists, who will move and attack. The end of the Mythos phase culminates in horror checks for those close enough to enemies that their sanity must be checked.

When your health reaches zero you gain an injury card. If your sanity becomes zero you gain an insanity condition. The difference being is that the insanity cards have alternate win conditions for that specific player. Sometimes these may be setting all the spaces on fire or making sure every token is removed from the board. It may even be helping to sabotage the other players making sure the monsters win. Upon losing sanity or health a second time an investigator is eliminated giving the remaining players one turn to win the game or become defeated.

Eventually, it will become clear what is needed for the players to win. By the time this happens the game board is usually filled with enemies and has grown exponentially, pushing the investigators’ resources to their limits. Upon completion of the scenario, the narrator returns to give you a debrief of the mission.

If you love dungeon crawling filled with puzzles and heavy on narrative then Mansions of Madness 2nd edition is for you. The best part about Mansions of Madness is the story. With 4 scenarios in the core game (22 scenarios total with the expansions) you will have plenty of content to choose from. With the app randomizing the scenario layouts, monsters, and tokens there is massive replay value for this game. This is one of the closest you can get to playing the Call of Cthulhu Role Playing Game without actually playing it.

Each story delves into the Cthulhu Mythos with a nice balance of horror and mystery, allowing you to become immersed the longer the game goes on. Each scenario feels unique and surprises you with new mechanics such as moving rooms, a roaming horde, and faceless monsters that move from room to room attacking NPCs that have been left unguarded.

The flow of the game is quite simple and easy to pick up. You will have the app to guide you and have the tokens through your play space to help you plan with your fellow investigators each turn. While the investigator’s turns may seem fast, you’ll find yourself running out of time and actions faster than you would like as the game progresses. With two phases the game moves pretty quickly, and strategizing will be where you spend the majority of your time.

Combat, while tough, is fair and feels winnable. Attacks are broken down by weapon types such as bladed weapons and firearms. Monsters have thematic attacks and horror checks. The game rewards you for using your investigation time wisely and will balance the number of monsters with the number of investigators.

One of the most interesting mechanics in the game is the insanity cards. This adds a wonderful unpredictability to the game, as you are required to keep these insanity card effects secret from other players.

The app is a massive part of this game and is the major difference between first and second edition. While it allows for solo play and for most of the game mechanics to be kept track of with little effort from the player, it is also tedious if not using a large device such as a laptop or tablet. If running from a phone, this forces a player or players to become a narrator and help direct others on where tokens and miniatures need to go. A great thing about this app is how it contains the multitude of puzzles you get to experience while playing the game. These are akin to things you will find in an escape room game. Some of these puzzles include sliding locks, descrambling panels, and logic puzzles.

As far as components go, the 32 miniatures included in the game are quite detailed. The monsters are plentiful and the investigators look great (as a bonus they can be used in your other Arkham Files games). The map tiles are thick punchboard and will be the bane of your existence if you do not organize them before you play. The app will tell you what tile to place and where to place it in the play area. Finding one or two from the stack will require some pre-game organizing and staying organized between plays.

If you love the Cthulhu Mythos and other Arkham Files games such as Eldritch Horror, Arkham Horror, and Arkham Horror LCG, this is a game you can sink your teeth (or tentacles) into. Mansions of Madness: Second Edition has an immersive story with the flavor of a dungeon crawl, great minis, a solid app. Its shortfalls include the app being a struggle on smaller devices, tile organization and bloat, and possibly losing the scenario after three hours of playtime.

Final Score 4.5 – A must own for fans of dungeon crawlers or the Cthulhu mythos. 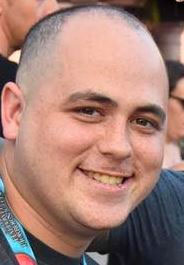 About the Author: George loves miniature wargames games such as Age of Sigmar and Star Wars: Legion. He also tends to gravitate more towards games with heavy narrative structures and great theming. If a board game leans into horror or sci-fi territory or has great miniatures it is probably on his shelf. George also loves to paint said miniatures and 3-D print terrain and tokens to use in board games and wargaming. He runs an active Call of Cthulhu group and has played Dungeons and Dragons and Pathfinder as well. Some of his favorite games are Warhammer: Age of Sigmar, Eldritch Horror, Cthulhu Wars, Arkham Horror LCG, Deep Madness, Firefly, and Resident Evil 2.