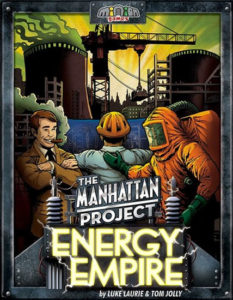 In board gaming circles, with wave after wave of new games entering the market, ten years can seem like ages ago. In 2004, Power Grid gave board gamers a strong economic game with the theme of creating energy networks across various countries. In that year, auctions as a game mechanism were prevalent and engaging.

These days worker placement mechanisms are all the rage. Does worker placement deserve to have a game of energy competition while adding environmental concern? Minion Games has delivered a design from Tom Jolly and Luke Laurie in the form of The Manhattan Project: Energy Empire to answer that question.

The Manhattan Project: Energy Empire (hereafter Energy Empire) is a worker placement, resource management game for 1 – 5 players that takes about 30 minutes per player. It plays best with 4 or 5 players.

Players sit in the roles of countries trying to develop industry and energy production over a period of time roughly from the end of World War II to the present day. Throughout the game, players will construct buildings, power plants as dice, and manage the pollution in their environment with the aim of scoring the most points.

As production quality goes, Energy Empire is top-notch. The art, quality of cards, and iconography are all extremely well done. Player mats keep players well organized and the layout of the main board really aids the understanding of play. The rulebook is fantastic and clearly explains everything with precision. The cardboard tokens for workers and energy are thick and chunky, similar to the ones for the original Manhattan Project game (review).

The game was a Kickstarter project, and one of the stretch goals was enhanced components for the game resources. The resulting components for steel, plastic, science and money are well done. The engraved dice representing power plants are especially nice.

To begin play, the main board for Energy Empire is seeded with starting Building cards. These are divided into three different sectors: Government spaces, Industry spaces, and Commerce spaces. A set of pollution tokens, depending on the number of players, is also stacked on a track as the game timer.

Once the game begins, it flows continuously without rounds. Each player chooses, on their turn, to take a Work Turn or a Generate Turn.

During this type of turn, players must place a single worker on the main board on one of the spaces which represent activities and resources to collect. For example, this may be gaining science, steel, or purchasing oil. Afterwards, depending on which sector the player placed their worker, they can activate any previously purchased buildings, assuming they have enough workers and/or energy. Players can also activate their nation card and move up on the United Nations track, which is a pure competition for end game points.

Energy is also used if a player wishes to place a worker on a space occupied by another worker. The player must place additional energy under the worker until their placement stack is larger than any other already placed.

This type of turn represents the player resetting their work potential for a new set of placing workers. They do this by first potentially collecting an achievement which represents end game points for a variety of goals. They then recall any workers to their Player Mat and discard all Energy tokens. Players can also spend any oil resources to gain oil power plant dice.

Finally the player rolls any or all power plant dice they have. This might include Solar/Wind (green dice), Hydro Power (blue dice, limited to one per player), Coal (black dice), and Nuclear (yellow dice). The resulting number of lightning bolts on the dice are delivered as energy tokens to the player. If a clean energy source rolled the highest cardinal number, the player does not collect pollution. If coal, oil, or nuclear dice resulted in the highest number, then the player places a single pollution token into their environment.

Players continue this process one after another until a predesignated number of pollution tokens are removed from the game. Players get one final turn and then points are tallied. Players receive points for keeping their player mat free of pollution, building power plants, the United Nations track, and various points for each building constructed.

When considering game purchases, often the main thing to consider is the value over time. With any particular game, how many plays or how many hours of enjoyment will it deliver? For those who love the concept and theme of Energy Empire, the resulting graph of enjoyment accelerates to a high quickly, but also falls off sharply just after a few plays.

The most engaging part of the game and the main reason to seek it out, comes from the theme of global power intrigue. The building cards show off the exceptional art in the game. It’s unfortunate that these are the mini sized cards because the imagery is comic, politically cutting, and yet still gorgeous in it’s color choices and staging.

On top of this theme, the actions associated with everything in the game fit just right. The concept in game actions connect directly to the theme concept. In addition, the country actions to move up on the United Nations track also represent the tone and success formulas for those countries. The mechanism for rolling dice to gain energy and how much pollution is delivered feels just perfect given the competing goals of clean environments and high energy production.

The worker placement mechanism itself (largest stack among existing workers) is not new, but it is just the right mechanism to promote the overall feeling of energy competition. Choosing the space on which to place a worker is highly engaging and the choices tense to maximize efficiency. It is easy to connect with both strategy and tactics in this game.

Even with this engagement, it is also easy to see optimal routes for gaining points assuming opponents follow their strategies. It’s not “easy”, but it is possible to not even worry about opponents blocking a particular path to victory with low numbers of players. Unless players are playing at the higher player counts, there is not a tremendous amount to slow players down.

This lack of tightness and the minimal variety in setup make for games that play much the same from game to game. When players start to see this, that initial dose of uranium high wears off quickly. Energy Empire really needs an expansion with lots of variable play to keep it interesting.

One common question and occasional misperception is that Energy Empire shares a common play style and theme with the original Manhattan Project game. The only things shared are the worker placement mechanism and the game world. Since this game is about producing energy, extremely little direct conflict is present. This was more often seen as a negative in that game.

Gamers want to know that their purchases matter. Some games stay in collections just to fill a niche in theme or mechanisms. This is that game. Players who shun the length and style of Power Grid, but love the theme, will find a gem with The Manhattan Project: Energy Empire.

The danger only lies in a semblance of replay value. The Manhattan Project: Energy Empire is a great to bring out with gamers new to worker placement and resource management, but seasoned gamers can tire quickly with not enough to challenge from one game to the next.

If you’d like to pick up a copy of The Manhattan Project: Energy Empire, you can get it for about $50.

Final Score: 3.5 Stars – While initial plays are extremely enjoyable, this is a title that is best left on the shelf for a while after each play to keep it fresh.