We review Lux Aeterna a solo board game published by Capstone Games. In Lux Aeterna, you are trying to keep your ship alive by playing cards and keeping systems functioning. 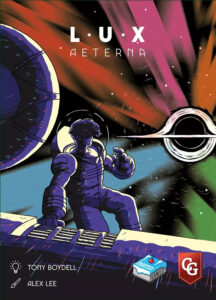 There are twelve minutes left. Alarms flash on the ship’s console counting down to our imminent doom. We turn our gaze to the event horizon and marvel at how starlight is absorbed at the edges of the massive black hole we’re slowly drifting toward. We wonder what it will feel like when its gravitational force begins to pull at the fabric of our being. Eleven minutes. Still no response to the mayday we sent after being struck by the meteor. Adrenaline kicks back in. Think fast. Do we burn out the FTL or hotwire the ignition system? Is there enough time to rebuild the stellar compass or for a full system reset?

Lux Aeterna, designed by Tony Boydell with art by Alex Lee, was released in 2019 but has found a new home with publisher Capstone Games. It’s a real-time hand management solo experience that plays in approximately—

We’re going to have to move fast. The objective is simple: draw all the cards from the main deck or repair three or more starship systems. Failure is also easy to grasp. If the ship reaches the black hole, we die—err, lose. If four or more systems collapse, we lose. If the timer (fifteen minutes on easy, ten minutes on hard) runs out? You guessed it. Another way to lose.

Six system cards are randomly chosen to represent the disabled ship. These represent Power, Life, Communications, Engine, Navigation, and Memory. Each system card features a die set to a value of two. To repair a system, dice value must be increased beyond six. On the flipside, if the value drops below one, it collapses. Once repaired, a system card may provide a possible benefit for the remainder of the game. Likewise, after a system collapses, a negative effect is activated.

Dice values change based on card play. The main draw deck is comprised of fifty-two multi-use cards with four glitches shuffled in. Each card drawn features different values and actions. On a turn, we’ll need to draw and play four cards. We’ll choose one to be an Event, one to be an Action, one to be our Speed, and the final is saved to a Cache. Once we determine where to play them, each card is resolved, and we draw back up to four cards to continue our journey. If a Glitch card is drawn it must be resolved immediately before continuing to draw.

To resolve the Event card, apply the indicated damage to the chosen system. To apply the Action card, we read the card’s effect. A wide array of effects can be triggered here, including increasing die values, moving the ship away from the black hole, removing glitches from the deck, and more positive outcomes.

To resolve the Speed card, move the starship the number of spaces indicated closer to the black hole on the proximity track. Finally, a maximum of one card may be saved for a future turn in the Cache. This saved card is considered part of our next hand and may even be discarded later if circumstances require a new card to be cached.

Turns proceed in this fashion until a win or loss condition is met. Final scores are tabulated and compared to previous attempts. Beyond the base game, we can make the following changes to the difficulty: reduce the amount of time, adjust starting position on the proximity track, seed the deck with more glitches, start with a system already collapsed, or play with systems face down until either repaired or collapsed.

Can anyone hear me?! Hello? Okay, there you are. It seems that Communications is back up and running. We had a reactor breach back there while we were replacing the dish motor and trying to adjust the signal boost algorithm. We keep edging closer to the black hole, but at least we’re making progress.

Lux Aeterna can be as thematic as you’ll let it. The theme is enhanced by the wonderful card art and minimal graphic design. It carries a sci-fi horror feel with its stark black backgrounds and white text, with splashes of color that correspond to different systems but also seem to evoke the flash of warning lights throughout the starship. The ease of use also helps the game stay out of your way—it’ll be your own decision making that bumps up against the timer, not trouble reading text or icons on cards.

It may take some time to find the right variation on how to play (how long is the timer, do we include all the glitches, etc…) but once you do it’s a tense and fast exercise. This is helped by the ease of setup and the inclusion of five-card options per system to make each game unique. Every time you sit down to beat the timer, you’re going to find a wrinkle that keeps you on your toes. After getting used to all options at your disposal, I’ve found that keeping system information hidden and using an eight-minute timer is the perfect spot for a riveting race against the clock.

There’s quite a lot done right here. And there’s not much room for anything else in the box. That said, I do wish there were a few more glitch cards to give that mechanism more variety. It’s the one area that feels weakest regarding included content. I’m also not a fan of beat-your-score style gameplay, especially with no added incentive to push harder such as a chart of achievements. And as a gamer who typically steers clear of real-time games, I do wonder if there was any thought given to providing a way to play without a timer involved. It would appeal to a wider audience, but at the same time—

We’ve replaced the capacitors and patched the nav systems. We’re going to try a full reset and see if that does the trick. I can feel it, the pressure building from the impending collision with the black hole, the way it tugs at body and mind. If this last transmission is ever received, please know that we’ve given it our all. Even with our impending demise, we recommend this game wholeheartedly to those looking for a real-time puzzle that challenges decision making and adaptability. We think you’re going to enjoy yourself for the minimal buy-in. In fact, find a nice soundtrack to listen to while you play. A classic score or experimental electronica to ratchet up the tension and stimulate another sense while sweating each choice. We’ve also chosen to play music over the intercom in the final moments of our interstellar journey. With that, I guess it’s time for us to sign-off. We hope you—

Final Score: 4 stars – All systems go for this tense, real-time, sci-fi hand management game that provides enough thrills to keep it from drifting into the black hole of obscurity.